A stroll down New Road - Evens The Institute 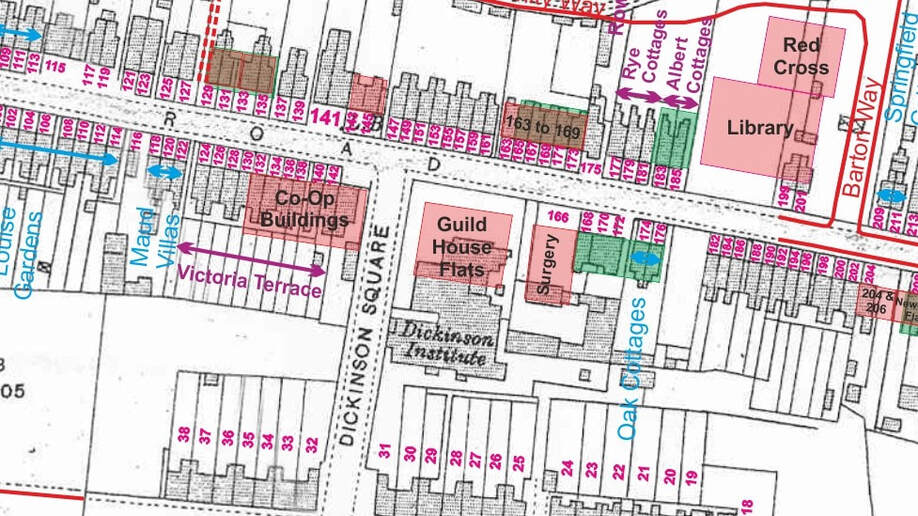 Map Data: Purple - Early Cottage Names / Blue - Current Cottage Names / Green - Buildings on 1880 OS Map / Pink - Buildings since 1914 OS Map
The first block of buildings encountered after Dickinson Square is the Guildhouse Flats, built in 1976 on the site previously occupied by the Dickinson Institute, later known as The Guildhouse. The Institute (or “The Tute” as it was often affectionately known) obviously had a major impact on the leisure and cultural life of the surrounding area.
It was in November 1895 that Charles Barton-Smith, manager of Croxley Mills from 1895 to 1918, having seen the need for a social club in the village, called a meeting of employees at the Mills, and the Dickinson Institute came into being.

At first one of the firm’s houses, No. 32, Milestone Field was used as the club room, the opening ceremony taking place on December 2nd 1895. Incidentally, this house later became 31 Dickinson Square as the former no. 13 was reinstated. Later generations must have been less superstitious! It was originally described as a “club and reading room”, but it was so successful that, to cope with the increasing membership, a second house in Dickinson Square was taken over.
Membership continued to increase and  in the following year the Directors agreed to build a hall, with stage and three rooms surrounding it, for the Institute premises. This was opened on November 8th, 1896.
For many years from its opening through the early 1900s the Dickinson Institute hosted the Annual Industrial Exhibition with exhibits from all over the country, some involving the transportation of some quite large pieces of machinery.
A programme for the 5th Annual Industrial Exhibition in 1900 indicated that it included demonstrations of:-
There were also over 70 classes of Competition including Carpentry, Drawing, Needlework, Laundry, Cookery, Pianoforte Playing, Solo Singing, Reciting, Gymnastics, Monkey Brand Polishing etc. with special prizes given by Messrs Lever Brothers of Port Sunlight.
Here are a couple of examples of the Playbills from the Wednesday evening entertainments in 1899 and 1900.
An advert in the 1902 Peacock’s Directory set out in some detail the wide range of activities that were available to club members …………
Obviously a very varied programme of events and it is little wonder that it was so popular.
Steadily the club and meeting rooms were being extended, and in 1904 a brick building facing New Road, said to include classrooms and baths, was opened. This marked the centenary of Dickinson’s.
Throughout this whole period there had also been dancing and gymnasium classes for girls, in several age groups, run by Miss Barton-Smith. She formed a company of Girl Guides in 1919 and these activities were continued as part of that organisation.
​Between 1914 and 1919 the premises were closed to the general public and donated to the war effort for use as a Voluntary Aid Detachment (V.A.D.) convalescent hospital for soldiers injured in the course of the First World War. 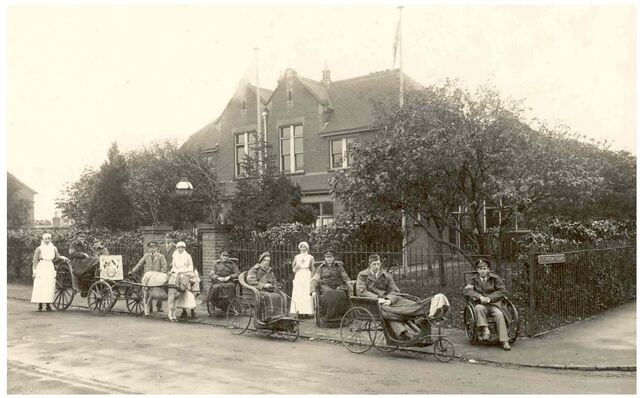 Dickinson Institute being used as a convalescent hospital some time in the period 1914 to 1919
The postcard above shows some of the convalescing soldiers in the bath chairs outside the Institute. There is even one driving a small pony and trap which, contemporary accounts say, was often seen driving around The Green!
The hospital eventually had 35 beds, mostly situated in what had been the main hall but with a few in a side room but even this did not go smoothly as this short extract from the December 1915 issue of the All Saints’ magazine explains ….
“The Hospital – There has been considerable delay in fitting up the Institute as a hospital owing to the delinquencies of the railway companies. The beds were dispatched some time ago but got hung up en route. But they have at last arrived and soon the hospital will be ready to receive 30 patients. The kitchen arrangements are not yet complete, but Mrs Kennedy thinks that everything will be in working order by the beginning of December. Things are a bit quiet on the French Front just at present, and the number of wounded being sent over must be comparatively small. It is possible, therefore, that the authorities may not require the accommodation for some time to come. The Quartermaster (Mistress?) will be glad of books and magazines for soldiers as soon as the hospital opens.”
The quartermaster (Mistress?) referred to was Maud Barton-Smith, daughter of Charles Barton-Smith, the Mill Manager. 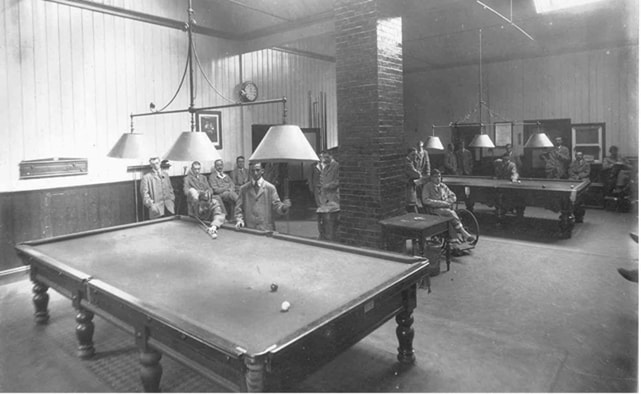 The last photo from the First World War period shows the inmates playing in the billiards room.  (Snooker was only just beginning to grow in popularity at this time.)
The men are wearing the blue uniform that convalescing soldiers were required to wear in hospital and in public, which generally became known as “Convalescent Blues”.  It was designed so that a handful of sizes would fit all recovering soldiers and inevitably it was a poor fit which required soldiers to turn up their trouser legs and shirt sleeves. The uniform also included a red tie.
It made the soldiers readily recognisable in public, as the nearby postcard comically shows, but also protected them from being harangued and spat on by the “white feather” brigade who might otherwise have mistaken them for conscientious objectors. 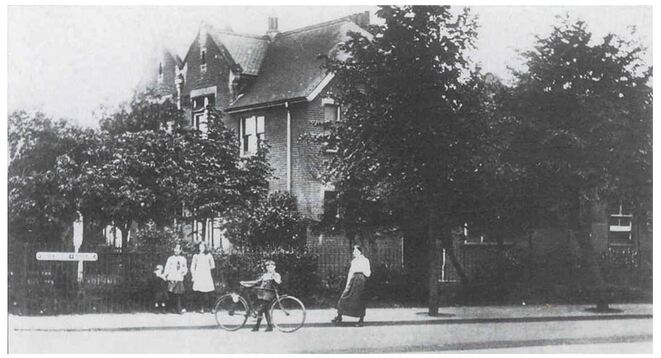 Another view of the Dickinson Institute – probably c1910
After the General Strike of 1926, the managers of the John Dickinson Company proposed that the mill workers form their own Trades Union. The Charter drawn up named it the Union of the House of Dickinson, and it followed that in 1928 The Dickinson Institute was renamed The House of Dickinson Guild, Croxley Guildhouse.
Through the years a helpful and benevolent policy was maintained, which assisted and provided a home and meeting place for a large number of societies concerned with sport, music, dramatics, physical culture, and literature. In 1938 a Darts room and Committee room were added, and in October 1939 a new lounge and further club rooms were opened.
At lunchtime on Sunday 3rd October 1965 the hall attached to the Guildhouse was destroyed by fire and immediately closed, although the remainder of the building continued to be used regularly until, in the autumn of 1974, the upper floor was declared unsafe.
John Dickinson Company were no longer able to justify the expense of maintenance and repairs and, on the last Saturday in November 1974 a final “Night to Remember” was held with the remaining four hundred members prior to its total closure the following day.  I assume that Dickinsons were still the owners although, looking closely at the photograph below, it looks very much like a standard council notice board on the flank wall so it is just possible that the council had taken over the responsibility for running the premises.
A tremendous and sad loss of a facility much used, enjoyed and appreciated by the community over many years.
PREVIOUS PAGE  /  NEXT PAGE