Probably named about 1870 when the Watford Road was part of the Hatfield to Reading turnpike road. Many long distance travellers using this highway would take advantage of the opportunity to stop here as it provided luncheons, dinners and teas. Pleasure grounds and gardens were also advertised.  One of the earliest brewers to supply the public house was Sedgwick’s Ales and Stouts.

During this time and up to the mid 1920’s the immediate area was still open farm land and John Dickinson provided a large area of this land opposite the pub for use by the village for recreational use. When the Metropolitan  railway was extended from Moor Park to Watford Park via Croxley Green this land was required and the sports ground moved to its present site off  The Green.

This hostelry was also a good location providing the mill workers and narrow boat ‘bargees’ with refreshments after a long working day. The narrow boats originally hauled by heavy horses were used for transporting goods on the canal. They were often seen escorted up Mill Lane for overnight stabling made available at the public house. Many of the narrow boats calling at the mill either to deliver or collect supplies were affectionately known as ‘The Croxley Dashers’ as speed was of the essence with this service.

There were several flag poles erected around the village about 1900 used as a means of communication as well as raising the Union flag for national events. One of these flagpoles was outside The Red House.

After the 2nd World War until  the 1950’s a special Saturday treat was provided by Mr Flack then living in Hazlewood Drive. Having finished his normal week’s work he and a friend would take the earliest Metropolitan train to Billingsgate Fish Market in London and bring back several sack full of shell fish, including whelks and winkles. These would be taken to his home and prepared. A home made ‘coffin-shaped’ barrow on wheels would act as a stall and this would be set up outside the pub for his eagerly awaiting regular customers.


The Red House was also known to have been included in the local pub challenges for various sporting games. The premises have been altered and extended many times since it was built and also offers restaurant facilities.(2015). The current website can be viewed here www.redhouse-croxleygreen.co.uk 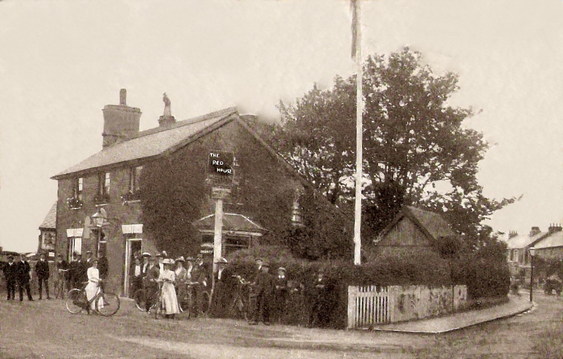 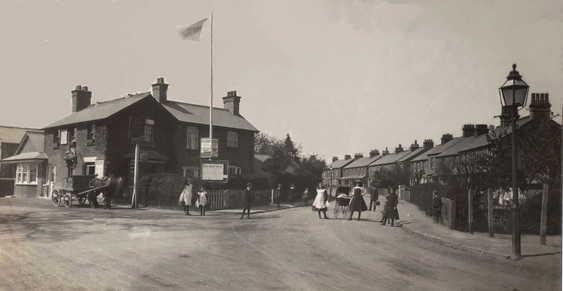 The junction with New Road and Watford Road c1910
The Red House as seen from junction with New Road and Watford Road. The Red House public house has one of several flag poles that was used to convey National or interesting news around the village. For example when the annual Oxford and Cambridge boat race was completed an appropriate flag was raised.
Light blue for Cambridge, dark blue for Oxford. One of the boys has a metal hoop -  a favourite pastime was to bowl this along with a stick! You can also see that some major building work has taken place to extend the Red House in the two pictures above. 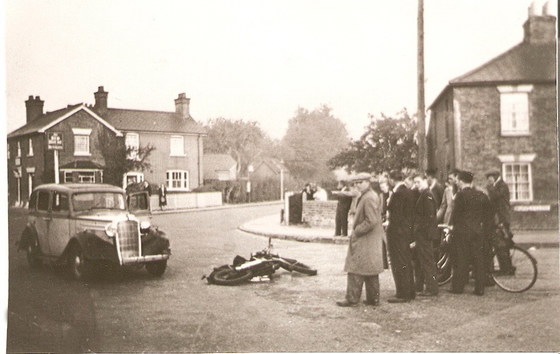 An accident had occurred on the bend outside the Croxley Green Metropolitan station. One side of the front bumper of the car is damaged – the fate of the casualty from the motorbike is unknown. One of the cottages on the right received a direct hit from an oil bomb during the Second World War which landed in a well in the garden. The cottages were eventually demolished and replaced by several houses on land adjacent to the station car park in the Watford Road. The Red House can be seen in the picture along with the bombed cottage that is missing in the picture below 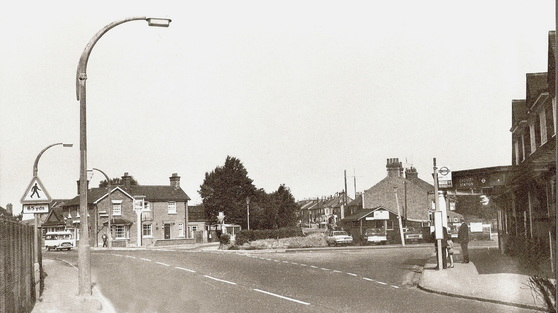 The Red House public house & Croxley Station
The Red House public house & Croxley Station - taken after 1949 when the station was renamed Croxley instead of Croxley Green to avoid confusion with the first LNWR line at the junction with Baldwins Lane and Watford Road that still operated at that time. To the left of the station is a wooden hut that was very popular with model makers and sold a variety of materials that would include such items as balsa wood for constructing model aeroplanes. A block of flats eventually replaced it. Unfortunately a gas explosion occurred in the building and it required a re build. 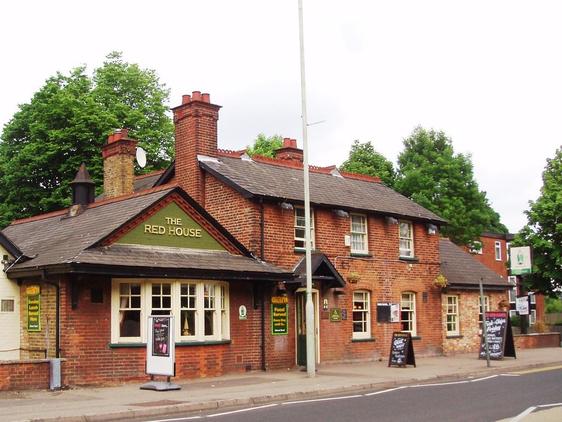 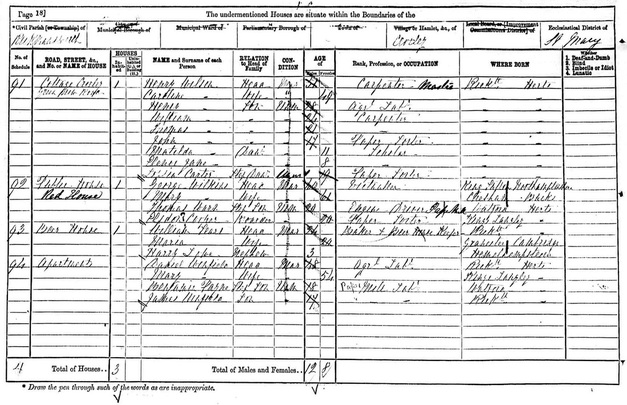 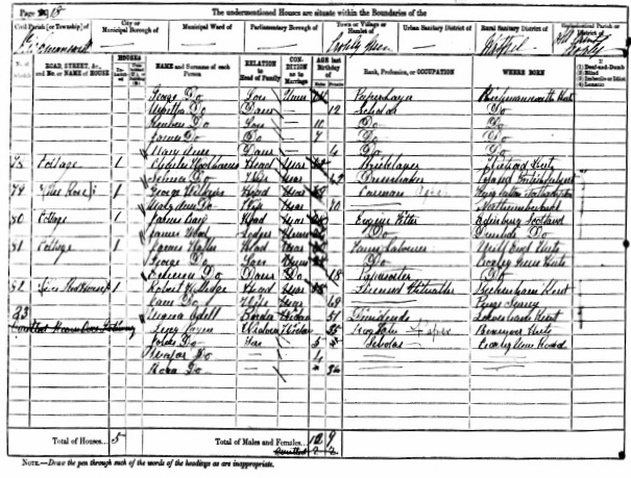 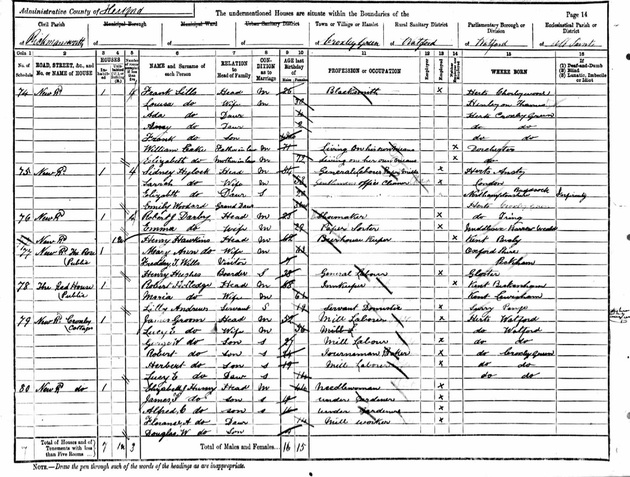 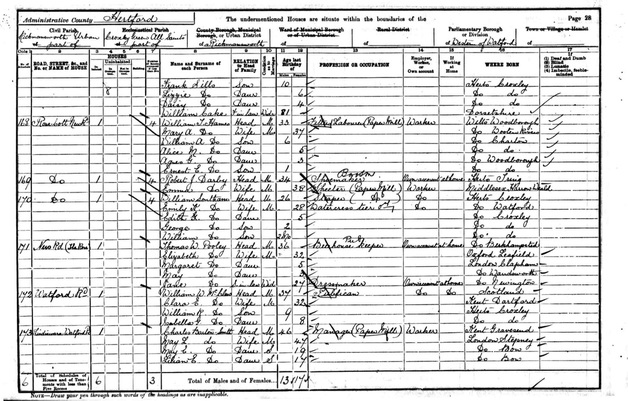 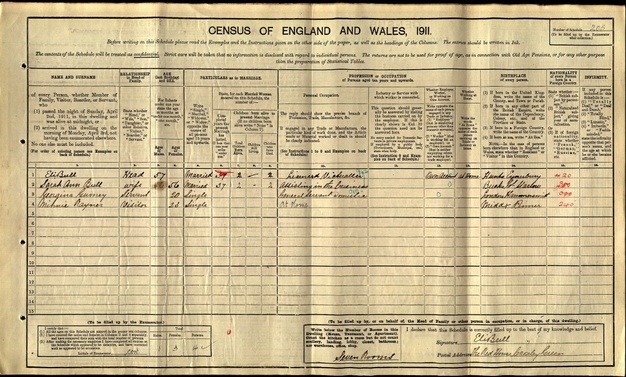 Copyright of Census
Crown Copyright information taken from the Census has be re-used under the terms of the Open Government Licence (OGL)  The OGL is a free licence developed to enable freer use of government information and public sector information without the need for formal agreements or any registration transaction,  This licence takes the form of a simple set of terms and conditions for re-use and can be viewed at;
http://www.nationalarchives.gov.uk/doc/open-government-licence/open-government-licence.htm