Gospel Hall poster 1896
Many modes of Christian Fellowship were becoming part of  village life as people took up residence, including The Salvation Army who met close by to The Windmill and then on Scots Hill. An account in the Watford Observer informs us that a detachment including Salvation Sisters regularly marched into Rickmansworth High Street to the Town Hall from their barracks accompanied by a male cornet player and singing very loudly. This would encourage onlookers to indulge in friendly banter and "horseplay" until the police were called to move the Salvationists on. They would sing even more loudly and it would appear they were criticised for their conduct on the Sabbath in a public place and told they should cease this type of behaviour!

Their site on Scots Hill was eventually taken over by the Plymouth Bretheren in the corrugated hut known as The Gospel Hall. This was replaced by a substantial brick building in 1896. However, during the Second World War, February 1944, it received a direct hit from a German attack and was completely destroyed.

The worshippers that used the premises eventually moved to a new more modern and enlarged building in Fuller Way. 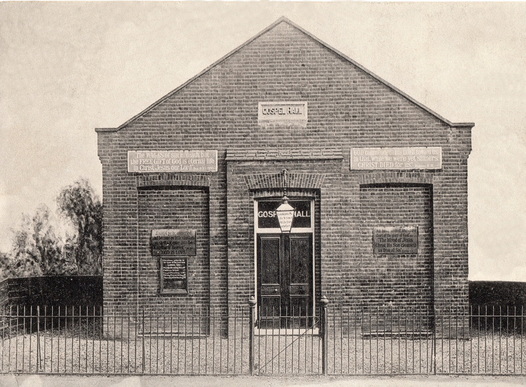