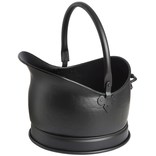 A coal scuttle
The introduction of rail transport meant it was now relatively cheaper and quicker to deliver coal to many towns and villages. The  Metropolitan railway extension to Watford Park via Croxley Green station, opening in 1925 and including the purpose-built adjacent 'goods yard', made it possible for coal to be transported and stored at the station. John Dickinson's paper mill required a continuous supply of coal and this was transported from the north east by ship into London and then by barge via the canal.  It was also brought from the Midlands, again using the canal system, and was unloaded directly at the mill.

The two schools in the village also required a large supply of coal and this probably came from the supplies held at the railway station then in Church Street, Rickmansworth. Early forms of heating in school classrooms was usually by a free standing stove or boiler using coal or sometimes logs of wood as fuel.

Housing in the village had developed in New Road, Dickinson Square and Dickinson Avenue. Council housing was taking place in Gonville Avenue and Springfield Close at this time (1920s). Homes were heated with an open fire grate in living rooms and sometimes in bedrooms. Cooking for the housewife in many cases was on a 'kitchen range', also using available logs or coal, before gas and electric stoves were added.

The opening of the branch line from Rickmansworth/ Moor Park encouraged developers to see that the open countryside of Croxley Green provided an opportunity for development, and they began to buy up large estates around the new station. During the 1930's the village experienced its largest growth in house building. Towns and villages along the Metropolitan line from Wembley/Harrow to Rickmansworth and Watford Park were now turning into semi rural/urban areas and were advertised as part of the Metroland.

With the opportunity now to obtain large quantities of coal, and hundreds of properties now in the progress of construction this was an opportunity for prospective coal merchants to set up a business in the village.

Walter Stone and his two sons George and Jesse had expanded Stone's Orchard fruit production and were delivering wood, coal and coke. Initially this was stored on part of the orchard site but with the opportunity of space at the Croxley Green station larger quantities could be stored there. George's daughter Doris married Robert (Bob) Woods and he eventually took over this side of the family business, setting himself up with a brand new Austin lorry for this purpose and consequently a wider delivery service was on offer.
There were several big companies operating around Watford and Rickmansworth too.  However there was still room for the smaller family business to function in the village.

This enabled Gibbs of New Road (no relation to the Blacksmith in the same road) to start a similar coal merchant’s service operating  from the goods yard at the station with several coal lorries. 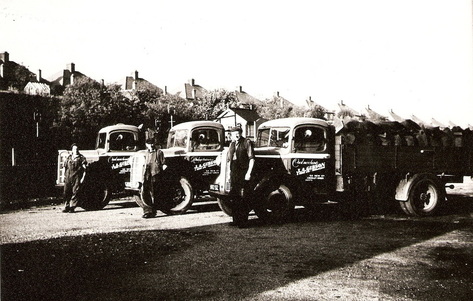 Gibbs coal lorries fully laden in the station goods yard
When the coal arrived in open railway trucks it was unloaded into specified bays in the goods yard. As the coal was ordered and required by the customers it was weighed into bags/sacks made of heavy hessian.  Each sack would contain approximately 1cwt (hundredweight) of coal. Coalmen delivering the coal wore a hat/cap back to front and a leather jerkin and carried the sack on their backs. Homes would have many types of storage and these might be a coal hole or coal cellar. Early cottages had a coal cupboard within the house but more modern premises had an outside purpose-built 'coal hole' cupboard or shed.

Coke and anthracite, products derived from the coal, were also used and were considered ‘smokeless’ and thought to cause less pollution to the air. However, in an enclosed area certain poisonous gases from these two products could become a health hazard. The popularity of these fuels in wintertime, with many homes now choosing to use them as an alternative to coal, caused something called smog.

Smog is a type of air pollution; the word "smog" is derived from ‘smoke’ and ‘fog’ as the smoke from the chimneys contained large amounts of soot as well as gasses. In large cities the ‘smog’ would be so dense that visibility became extremely poor and it was referred to as ‘pea soup’.

Much soot would cling to the inside of the chimney and if not cleaned regularly could cause a fire in itself. This had led to the practice of using young children in the 1800's to climb the chimneys for cleaning but this was eventually forbidden by law and 'chimney sweeping' became a new occupation. The 'chimney sweep' used long rods joined together which were attached to a flat round brush which was inserted into the chimney fireplace in the home and pushed up and down to disturb the soot which would fall into the hearth, covered by a cloth to protect the furniture. The soot was then removed. To make sure all of the chimney had been swept it was a delight to young children outside in the road waiting for the brush to appear above the chimney pot.

With the new housing now equipped with modern fire places it was fashionable to own 'modern' gadgets for attending to the fire such as a coal scuttle. A companion set comprising useful equipment to clean the hearth or monitor the fire, came in various guises but most would have a brush, poker, shovel and tongs. Many fires would require a fire guard and sometimes a fender that would sit near to the fire with little boxes either side which were ideal for small children to sit on and warm themselves in wintertime. Prior to the introduction of television the 'fire place' was the focal point for the family, who would sit together in the evenings and listen to the wireless (radio).

A popular practice especially during winter times was the use of a long- handle 'toasting fork'  fashioned in such a way to hold a large slice of bread (sometimes referred to as doorsteps!) and this was held  towards the flames of the fire and toasted. Spread with an ample amount of butter or fat from the Sunday roast, commonly known as 'dripping', this would be a welcome meal to many poor families.

With the introduction of central heating using either gas or electricity for heating purposes and producing a cleaner environment plus a decline in the coal industry - coal merchants were phased out.

However, in recent years many families have now introduced a 'wood burning' stove into the once redundant fireplaces. 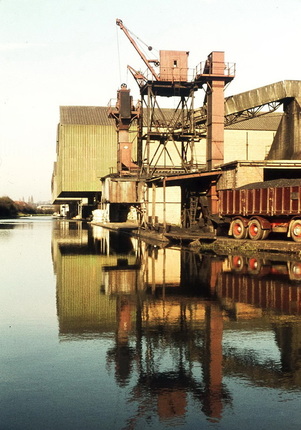