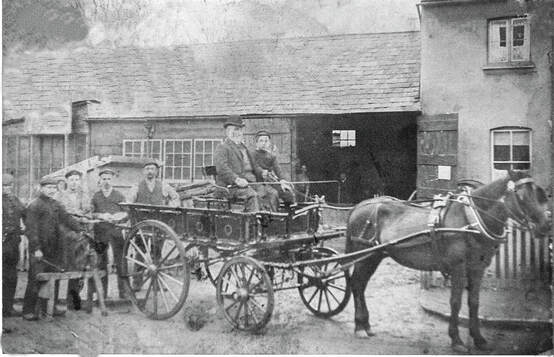 Jesse his wife seated and his four sons and Wally Chapman
Croxley Green began to flourish in the mid 1800's as the surrounding land became attractive for the gentry to escape and enjoy the open countryside yet still be within distance of the towns. At this time their means of transport would involve horse-power to draw their carriages or carts and to ride. Local farmers would also use horses in the fields and in time, when the first shops arrived in the village, horse transport was used for delivering produce and goods.

Consequently, the need for maintaining both the horse and the conveyance was essential. Census returns for Croxley Green show there were a number of villagers who had the skilled trades to repair and upkeep them as well as supporting passing travellers who would require their services. These trades might be the version of the modern day 'garage'

Residents as part of their memories, recall the village having at least three blacksmiths from around 1900 onwards. The locations of the smithies were at the end of Copthorne Cottages, another adjacent to The Artichoke public house and a more notable one in New Road.

Jesse Gibbs and his wife lived at their family business in New Road and are shown in the 1881 to the 1911 census. The house and site is now a local garage and car repair business. Among their children they had four sons as well as a son-in-law Wally Chapman and all participated in the process of cart production/blacksmithing including the  shoeing of horses.

Individually they would be responsible for each separate component in the making and final finish of the cart. This would include carpentry, metal work and painting. The final finish required for the paintwork would be extremely important as the carts would have to be robust to withstand severe all year weather conditions as well as usage. For instance at least several undercoats were applied besides a minimum of four topcoats.

Young village boys would be excited when the finished wooden wheels required the metal rims to be applied. This was done at the front of the premises when a fire would be created to provide sufficient heat to expand the metal rims before applying them to the wooden wheels. Once this was achieved they would require immediate cooling by dousing in cold water. A well on the site would have drawn water for this purpose. A good blacksmith would not need to strengthen the attached rim with nails. However, any such metal accessory would have to be made by the blacksmith and made individually for the conveyance.

When the metal rims were ready to be applied to the wooden wheels, word would get round the village and the local lads would assemble to watch the Gibbs brothers create the necessary bonfire and watch with great excitement.

Many young men from Croxley Green volunteered to serve their country during WW1 and were fortunate to survive the terrible times whilst in France. They were eventually able to return to the village. With strength and fortitude they continued with their lives knowing they had played their role in making it a safe and peaceful place to live. Dennis Gibbs was such a person.....

Dennis Gibbs was  born in 1892 and lived with his parents Jesse and  Ann at 48 New Road, working at  his father's blacksmith premises next door. The 1911 census lists Dennis as a Coach painter, responsible for painting the carts made in the family business. Taught to be particularly thorough he would apply at least four top coats of paints for durability, following the initial preparation of several undercoats to the woodwork.

Britain declared war on Germany,  4th August 1914 and Dennis registered with the army to serve his country. He received his 'call-up papers' and enlisted on 8th December 1914 aged 22yrs at the Watford recruiting office. He was assigned on the 21st December 1914 to barracks at Woolwich. Dennis served in the Army Service Corps (ASC) 150th Company, 18th Division. The ASC changed to the Royal Army Service Corps in 1918.

The largest element of the ASC was the Horse Transport section and service numbers were prefixed by the letter 'T' indicating this.  Dennis' service number was T/4  037857 and  his World War One records included a letter from his father Jesse dated 14th December 1914, confirming Dennis had previous experience with horses.
A wheelwright called Reuben Doggett lived at Providence Hall on The Green  and was a well known character who would be responsible for making wooden wheels only. Reuben and his wife Catherine and son William are listed in the census between 1891 and  1911 as occupying the house.  Reuben is 57yrs, Catherine 52yrs and William 27yrs in 1911. Providence Hall is actually a cottage on The Green built in the 16th century and  known as 'Doggetts' when Reuben resided there. As with many properties around The Green the cottage once had an orchard attached. 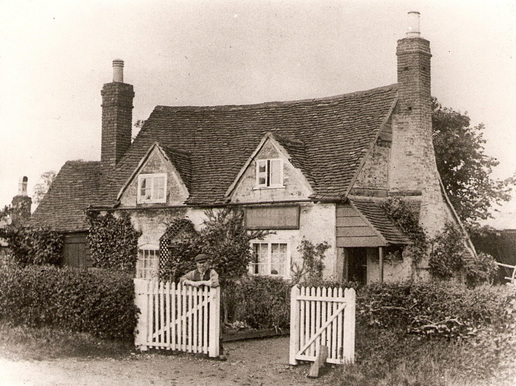 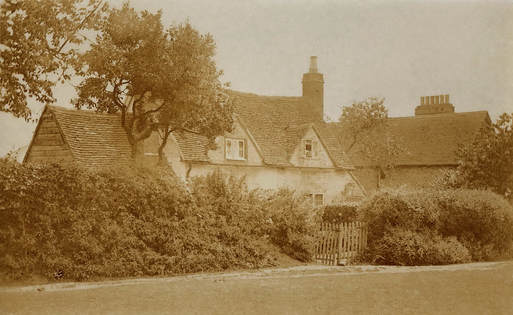 Providence Hall c1910
Alan Williams, who is related to the Jesse  Gibbs  writes,
In the summer of 1966, when I was 17, my parents and I moved to a bungalow at 21 Sherborne Way from my childhood home in Whippendell Road, Watford.
My father had come from South Wales in the 1930s, but my mother’s parents were both from Croxley families.  Her mother was Edith Gibbs (born 1890), the youngest daughter of Jesse and Ann Gibbs, Jesse having the blacksmith’s shop in New Road which is nowadays the New Road Service Station.  Her father was Walter (Wally) Chapman (born 1888), wheelwright, who worked alongside Jesse Gibbs and his sons in the early-twentieth century.
It might be expected that a village blacksmith’s shop had been in the same family for generation after generation.  But in fact the Gibbs were not a long-established Croxley family, and neither were the Chapmans.  Both Jesse Gibbs and Walter Chapman hailed (coincidentally?) from the Amersham area of Buckinghamshire.  I have been able to trace the Gibbs in Buckinghamshire back to approximately 1640.  Earlier generations of the Chapmans – including Walter’s father, John – lived in Bedfordshire, where I have traced them to approximately 1730.
In the past both the Gibbs and the Chapmans had been humble agricultural labourers, and it was only by the late-nineteenth/early-twentieth centuries that they had elevated themselves somewhat by acquiring skilled trades.  In 1871 Jesse Gibbs, aged 23, was a lodger in the home of George Rixon in Farnham Royal, Buckinghamshire, a blacksmith, to whom Jesse was presumably apprenticed.  By 1881 Jesse appears as a blacksmith in Croxley Green.
The Chapmans followed a similar pattern.  In 1881 John Chapman, Walter’s father, was an agricultural labourer in Weston Turville, near Aylesbury. By 1891 he and his family were in Cow Lane, Croxley Green, where he was still recorded as a farm labourer, but by 1901 he had become a carpenter.  The 1911 census is more descriptive, stating that he was a carpenter in a “paper mill”, few guesses which one, I’d have thought!  Presumably, this influenced Walter to follow broadly the same line of work, specialising in the trade of wheelwright, which is how he is described on the 1911 census.
Walter Chapman was the fourth of eight brothers.  In 1911 he was living with his parents and his four younger siblings at 155 New Road, but in 1914 he married my grandmother, Edith Gibbs, and they went to live in Hagden Lane, Watford.
Of the eight Chapman brothers, four volunteered for military service early in the First World War and were celebrated in the ‘Watford Illustrated’ of 11th January 1916.  The eldest brother, Albert, was wounded at Hooge in 1915 and had to have his right leg amputated.  In 1911 Albert had been living at the stables of the Victoria Hotel in Rickmansworth (which I understand has only recently been demolished) and working as a “horse keeper”, which may explain why he entered a cavalry regiment, the 3rd Dragoon Guards.
Walter Chapman, however, was given an absolute exemption from military service by the Rickmansworth Military Service Tribunal, on account of his occupation, repairing agricultural machinery.  I am indebted for this information on the Chapmans to Brian Thomson’s book, ‘Croxley Green in the First World War’.
Walter and Edith Chapman had three girls, the eldest, Joyce, being born in May 1915, and twins, Olive and Dora (my mother) being born on 19th August 1919.  Walter, however, died at the age of just 40 in 1928.  As I understand it, he had been engaged to repair the wheel of a watermill, which entailed standing for long periods in the mill race, as a consequence of which he caught pneumonia.
This tragedy left Edith to bring up the three girls on very limited income.  She had always worked in domestic service.  In 1911 she was a live-in servant in the Chorleywood home of a Mr Louis Charles Mieville, who worked on the Stock Exchange.  I understand that, at some time, she was employed by the Tussauds, this presumably being the family of John Theodore Tussaud in New Road.  Later in life she worked for a Dr Berry, a well-known GP in Watford, and when I first knew her as a child in the 1950s she was still working as a ‘daily’ for the Hewitt family who owned the Premier Coaches concern.
Olive married Don Reed in 1940, and Dora married Bill Williams in 1947.  I was born in 1948, and for a time we were all living with ‘Nan Chapman’ in the house at 310 Hagden Lane.  My parents and I moved ‘round the corner’ to Whippendell Road, but Auntie Olive, Uncle Don and Nan stayed in Hagden Lane, together with my cousin, Sue (born 1954), until they all moved to 28 Canterbury Way in the early-1960s, a ‘coming home’ to Croxley Green for Nan.  She continued to live there until she died in 1983, having been a widow for some 55 years.
When I was a child, Nan Chapman, Auntie Olive, Uncle Don and my own parents all attended the Methodist Church in Whippendell Road.  The two sisters had both been married there and, as a young woman, my mother had taught in the Sunday School.  This all leads me to presume that the Gibbs (certainly) and the Chapmans (quite likely) had been associated with the Methodist Church in Croxley Green.
Alan Williams
Langholm, Dumfriesshire
November 2016