​On 28th June 1919, Great Britain with others countries signed the Peace Treaty at Versailles, France, finally bringing the WW1 conflict to a close. To celebrate this and to bring closure to the war, Saturday 19th July 1919 would be observed as a Public Holiday throughout Great Britain.
At that time, the village of Croxley Green organised a grand display and a parade to celebrate the occasion.
One hundred years on, there was support for local communities throughout the U.K.  to consider ways in which the Peace Celebrations of 1919 should be remembered. As the 100th Armistice celebrations in the Community Club on the 3rd October and 14th November 2018 had been successful, the same collabriative group met and considered a community picnic in Stone’s Orchard would be a special way in which to mark this occasion. Sunday 14th July 2019 was chosen as the date closest to the anniversary and would be funded by Croxley Green Parish Council. 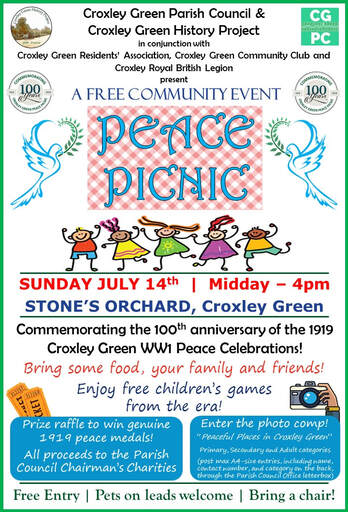 Peace Picnic poster (Designed by Ben Whitley)
​Photographic Competition
As well as the picnic, it was decided to hold a Photographic Competition, ‘Peaceful Places in Croxley Green’ as a subject.  Rosettes would be awarded to the winning entries.
Yellow Ribbons
Using the information for the 412 soldiers with WW1 connections to the village, it was decided to celebrate and remember every individual soldier by tying a named yellow ribbon on selected trees in the orchard. Each soldier would have his name and address printed on a length of special weatherproof ribbon.
The preparation for writing the details for the 412 soldiers was done over several afternoons arranged in the Parish Office by Amanda Gardiner, the Parish Council Administrator. Sue Pope, Heather Fuller, Stella Davies, Rosemary Dennis,  Julia Matheson and Margaret Pomfret contributed towards this task.
Houses that had displayed the WW1 soldier’s posters in November 2018 would be approached to offer them the opportunity to tie a ribbon, as well as residents attending the picnic during the afternoon. 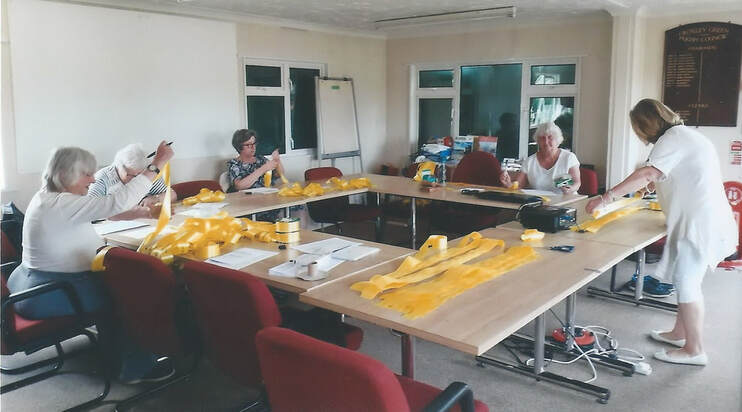 (© Loaned by Amanda Gardiner) The yellow ribbons are prepared
Stroma Ltd, Digital Printing, Southall, Middlesex. https://www.stromaltd.co.uk/
the company who had printed the window posters for the soldiers free of charge once again were generous in donating an A1 size print showing all the 412 soldier’s names.
Centenary Commemorative Booklet
A booklet to accompany the event and describing the village Peace Celebrations for 1919 was researched and written by Julia Matheson, photographs by Margaret Pomfret and the design and layout by Ben Whitley.  The title ‘Commemorating the 100th Anniversary of the 1919 Croxley Green WW1 Peace Celebrations ‘  would be available during the picnic price £1.  Any surplus booklets would be donated to the Croxley Green Library and Three Rivers Museum.
Village Walk  Leaflet
When the enlisted men left to fight during 1914-18 the village population was in the main just few roads centred around Scots Hill and New Road.  It was decided to produce a walks leaflet taking in this area and describing many of the features that still existed or had now gone to redevelopment. 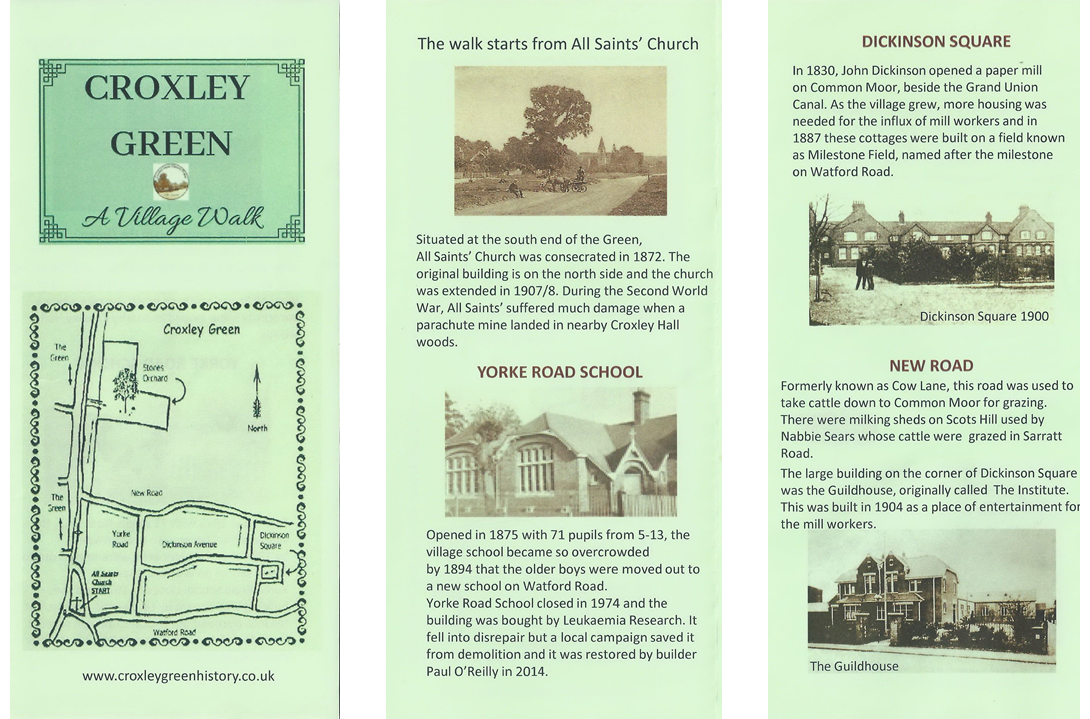 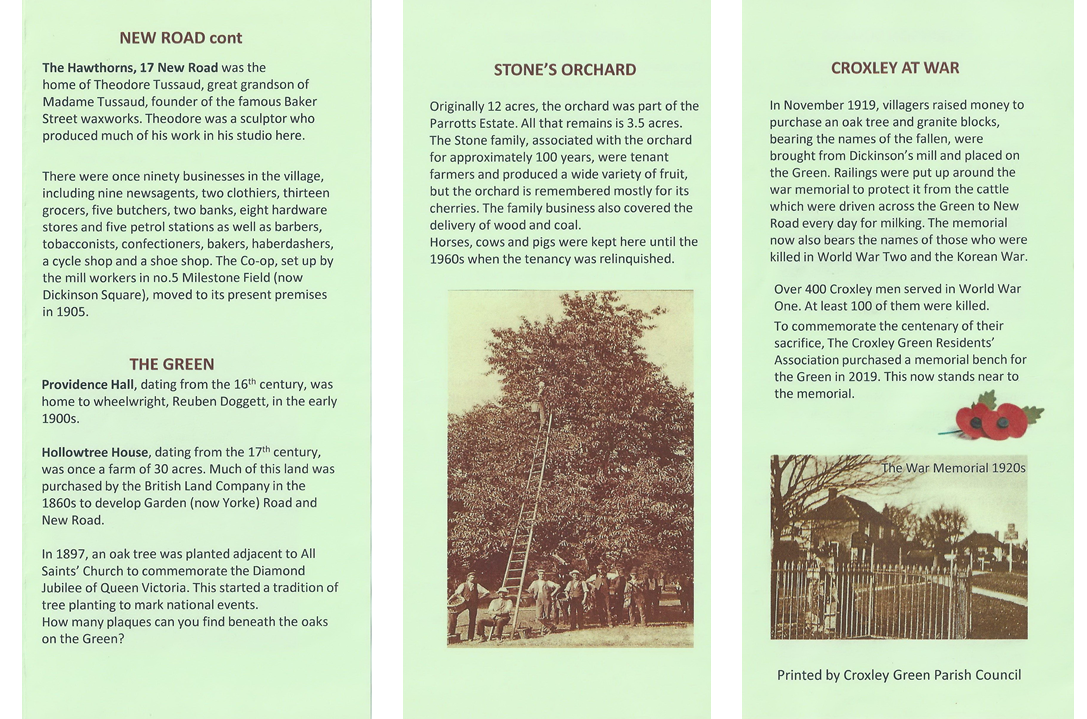 Games
As well as the picnic during the afternoon, an opportunity to enjoy games and activities, old fashioned as well as modern would be distributed around the orchard area. They included the following,
Quoits, using horse shoes sourced by Cllr. Derek Wallington and supervised by David Tait. (A recorded tally of points  was kept for adults and children during the afternoon for the highest score) and a small prize offered; Apple Bobbing, overseen by June and Jo Emson; A selection of Table Top games provided by Cllr Tony Walker; other activities provided by the Parish Council included a Giant Hopscotch, Jenga, Spinning Tops and Whips,  Yo Yo’s
Photograph Display
Many photographs of the original Peace Celebrations were available taken in 1919, and these too would contribute and feature as a display. Two wooden figures, depicting a soldier and sailor from WW1 with their faces  ‘cut out’  were created by Don Carless, as an added attraction to pose and have a ‘photo’ taken, looking through the ‘cut out’.
Preparations on the day
Setting up for the afternoon, members from the Parish Council, Community Club, Residents Association, History Project as well as enthusiastic residents arranged the Orchard area in readiness ,giving families and friends space to enjoy the ambience and activities on sunny afternoon.