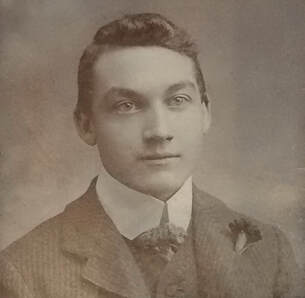 (© Loaned by the family) William Beauchamp
​William Charles Beauchamp was born in West Dean, Wiltshire, 30th May 1885, to parents Charles and Amelia. When William was five years old he and his sister Mabel, aged seven, were living in Downton, Hampshire, where, according to the 1891 Census, their father was a farmer. The village is on the outskirts of Salisbury, close by Highclere Castle. (Highclere Castle is used as Downton Abbey in the TV series of the same name).

The 1901 census reveals the family had moved to Mortlake, Richmond.   William has left school and is apprenticed to a Cycle Maker. Cycling was steadily becoming a pleasurable form of transport and, with the newer designs making production quicker and cheaper for all classes to purchase, this would have seemed a career with excellent prospects for William.

Some time after 1901, William moved to Croxley Green.  In 1910 he married Ada Louisa Sills, a local girl living with her parents Frank and Louisa and family.  Ada was born on 21st July 1886 and was baptised at All Saints Church on 5th September the same year. The family were living in New Road when William arrived in the village.

The Census of 1911 shows William and Ada living on Scots Hill.  William is now a qualified Cycle and Motor mechanic, employed at a Motor Works. This could possibly have been on Scots Hill too, as it is known that one existed in this location.

Family history and personal memorabilia for William reveals his career changed during World War One 1914-1918.  He was employed in the local John Dickinson Paper Mill as a Firefighter.
​The family have several personal memorabilia belonging to William. A special WW1 medal that all John Dickinson’s staff received from the company is one William also received. These were issued and engraved with ‘Work Well Done’ as well as the dates. The employees were under a great deal of pressure to keep the mill functioning whilst producing many special war-related products. These were not part of the mill’s usual output, but were required by the Government. 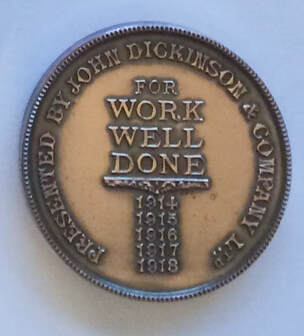 (© Loaned by the family) All John Dickinson employees received a medal for their contribution during the war.
​Firefighting at the mill became a very important occupation in the company due to the increasing amount of paper production and the growing size of the site. The mill required two types of fire fighting services and equipment. Fires could start at any point or place within the mill and they would have to be accessed from within as well as from the canal side.  The location of the mill was close by to the River Gade and the Grand Union Canal ran alongside the building.  This was a very important source of water to extinguish the fires.

John Dickinson’s first official private fire brigade was established at Nash Mills in 1883, founded by Lewis Evans, grandson of John Dickinson. There was, however, firefighting equipment prior to this at all the John Dickinson mills.

Croxley mill had fire barges as well as fire engines to access a fire as required. The mill processing machines were run by steam, the engines/locos transporting the coal to the boilers were also run by steam.  Safety measures within the mill were paramount.  Notices were constantly in place around the mill as a reminder to the staff of the vulnerability of the environment they worked in.
However, the mill was constantly upgrading the fire-fighting equipment.  For instance, in 1883 a Merry-weather manual engine was purchased after one outbreak.  Nevertheless, several other major fires were recorded.
​A particularly serious incident occurred in May 1924, which put the entire local mill brigades to the test. A fire was discovered in the main offices at around 9pm. Croxley mill’s own brigade was soon mobilised to save the building but the task was too much as there was a strong breeze that night fanning the flames. Such was the intensity, more brigades were called in and arrived soon after 10pm from other mills including Apsley and Nash mills. National fire crews came from Bushey, Berkhamsted, Chesham and Hemel Hempstead. Kodak (Harrow), Rickmansworth, Watford and St. Albans were also involved. In total at least ten Brigades and one hundred and fifty fire fighters tried in vain to save the buildings.  The Offices and Stationery Department were completely gutted. Though water was freely available from the canal and the River Gade, the damage ran into several thousands of pounds.  William would have most certainly been involved with this incident.  Eventually his long service with the mill gained him three Firefighter Fighter Service medals, for five years, ten years and a twenty year service medal which he received in February 1934. 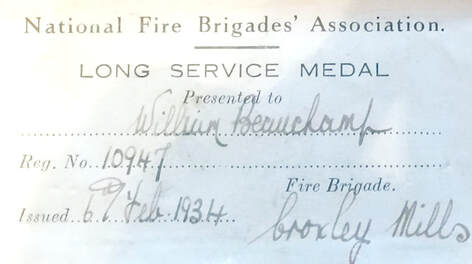 (© Loaned by the family) The presentation card for William's 20 years medal he received.
​The 1939 Register, taken on the 29th September to record the location of all UK citizens following the outbreak of World War Two, shows William as living at 289 New Road. The household includes Ada, their daughter Vera born 9th May 1920, and William’s mother Amelia aged 80 years.
William is no longer is employed by John Dickinson but is once more a Motor Mechanic. According to the family William had shown a lifelong passion for the mechanical side of motor vehicles.

During the 1930s, there was a growing concern in the British Government over Germany’s increasingly large army.  In December 1937 it passed the Air Raid Precautions (ARP) Act, requiring local authorities to ready themselves in case of an invasion or an air attack. Germany was determined to take back control of many of the border areas that it had initially invaded in the WW1 conflict of 1914-1918 and which had been reinstated following its defeat. When the German army invaded Poland, with whom the United Kingdom had an alliance, this country issued an ultimatum and, when Germany did not respond, declared war on 3rd September 1939.   Immediately, many residents who were not in the age bracket to enlist or to be called up to serve in the armed forces, joined the various local defence organisations.

For local people, one of the most visible forms of ‘ARP’ were the air raid wardens.  This organisation would include firefighters, rescue and first aid groups, ambulance crews and medics. With many years of experience as a firefighter with John Dickinson, William made the choice to join the ARP as a warden.
A warden had a range of duties, such as advising local people on the precautions they should implement in case of an air raid. A particular task was enforcing the night time ‘blackout’ to ensure that no artificial lights were visible from the air. During and after a raid, wardens were responsible for monitoring and reporting bomb damage, and for helping to coordinate the response of other civil defence services. There were a number of occasions during the war that Croxley Green came under attack from German bombing. William would have been at the forefront with other residents in the many defence groups that were operational during these tense and worrying times.
​See Croxley Green History - Civil Defence - Croxley Green History Project

William continued to live in Croxley for the rest of his life.