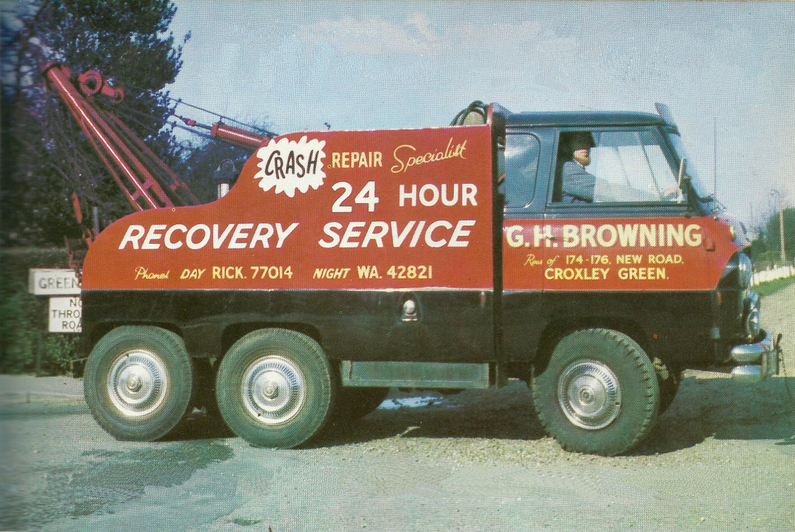 (© Hot Car magazine June 1971) G H Browning truck on The Green
A 15-cwt Thames? Wrong! A six wheel15-cwt. Thames? Wrong again! A 6-wheel 4-wl?eel-drive Thames? Quite wrong! George Browning and George Simmonds
wanted a high capacity, go-anywhere, powerful, easy-to-operate tow-truck with small over-all dimensions for operating in narrow lanes, and confined spaces. And they found themselves looking at a Short-wheeIbase Land Rover which was rapidly undressed and left naked in the middle of the workshop floor. Then work began.

The chassis was reinforced, lengthened, and the rear fitted with four L/R front. springs upturned, onto which they hung two driving axles. Then they fitted a special air suspension which raises the front and lowers the rear when unladen, and lowers the front and raises the rear when loaded. As the vehicle has a maximum proof-load lift of over two tons it is capable of actually towing away a lot of weight-in addition to its own. Therefore it's got dual brakes-two separate systems and two separate servos. And pneumatic operation of the suspension ​-the pump for which is on the 3-litre 6-cylinder Rover car engine they fitted. It's all original thought and work-as is the highly modified Thames cab, with the last word in driver comforts. The excellent appearance and finish is not surprising-the company does all kinds of bodywork repairs, from small dents to major accidents (even to straightening out damaged shells for car-modding enthusiasts).
You could have this fascinating device at G. H. Browning, 174/176 New Rd., CroxleyGreen,Herts (Rickmansworth 77014).
(© ​Hot Car magazine June 1971) 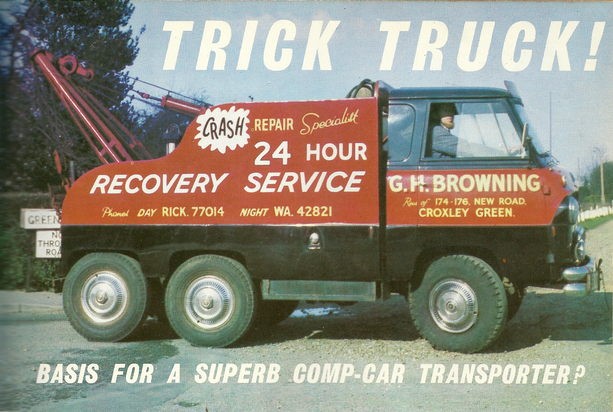 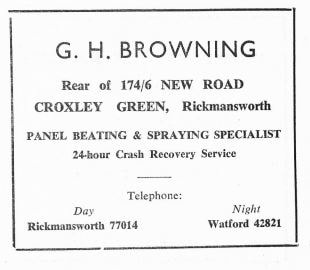 An advert for G. H. Browning that appeared in The Croxley Resident April 1965

Another mention for G. H. Browing in the Autumn edition of The Croxley Resident 1985 showing their community support for the Revels.