The scouting movement dates back to the early 1900’s when Lord Robert Baden-Powell having had an illustrious military career in the South African Boer war playing a major part in the defense of Mafeking which eventually led him to create opportunities for young boys to enjoy the freedom of the countryside as well as experiencing teamwork.
Brownsea Island, Poole in Dorset was chosen as an experimental venue by him to take some 20 young boys in 1907 from mixed backgrounds to set up a camping program under his leadership. This was so successful that he published his results the following year called ‘Scouting for Boys’ in six fortnightly parts leading to many enquiries on setting up Scouting Patrols throughout the country. The ‘Movements’ motto is taken from Baden- Powell’s initials BP – Be Prapared
In 1909 an official list of Scout troops was recorded in Hertfordshire and mentions Croxley Green as having 17 members led by Mr Pitkin the Scoutmaster. With the First World War some five years away many of these young people joined up with the Church Lads Brigade to join the 16th Kings Royal Rifle Corps to France/Belgium supporting the conflict with Germany between 1914-18

A junior section, a cub pack, was formed during the war in 1915 meeting in the stables behind Fernley House on The Green but as the numbers were small  boys wishing to become Scouts mostly joined the Rickmansworth Troop.
Rover Scouts
The first Rover Scout group for older boys was formed in 1928 initially led by John Paterson and met in the ‘Tank’ Building at the back of Dickinson Square. Early Rovers included Geoff Newton, Percy Graver, Len and Dick Denton. 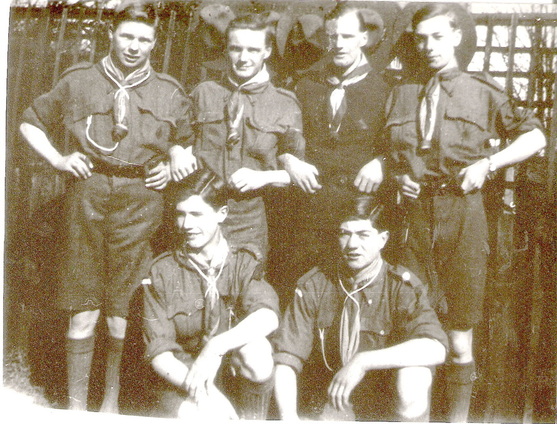 John Paterson with 4 Rover Scouts
As the 39th South West Herts Scout Group , 1st  Croxley Green, Arthur Barton- Smith (KAL) took over as Rover Leader as well as Group Scout Master from 1929 for almost 40yrs. Scouting expanded during this period and the ‘Tank’ became too small. With the support of parents, funds were raised to buy land in the Watford Road and a new building was erected and completed just before the Second World War. 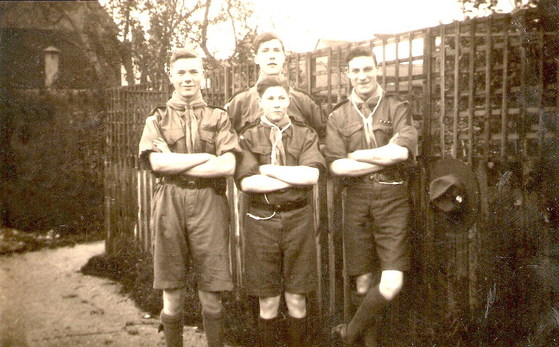 June 1930 Four of the original Rover Scouts
During the Second World War period ‘Kal’ kept the movement functioning and the new building was let to Herts County Council during the day to accommodate local school children as well as evacuees from London. This was a difficult time as many of the leaders were drafted into the armed forces but Kal used the older boys who were available to act as ‘runners/message boys’ for the local Home Guard. 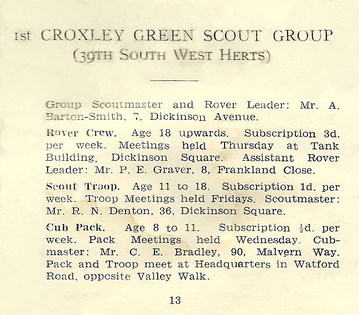 Taken from the Croxley Green Society booklet
When the seat was unveiled Dick Denton spoke in remeberance of  Arthur Barton-Smith. The following words are from his original the notes he used in that dedication.
Pleasure and honour at being asked to unveil and dedicate seat in his memory. Arthur B/S, knownas Kal to Croxley Scouts, was born leader & organiser. Was GSM (Group Scoutmaster) in this village for 40 years and in with his own inimitable and inconspicuous way worked 7 days a week for the youth of this village. In that 40 years100's of boys and young men found their manhood under his guidance and spirit of service.
The Scout H.Q. In Watford Road one of the first H.Q. Of its kind in the County was brought about by his keen enthusiasm to have a place of their own in which to hold their meetings, and meant an enormous amount of work by himleading his eager band of Scouts, Rover Scouts. Parents and friends to attain the finished product- a H.Q. Where the Scouts of today are able to work and play in the knowledge that their inheritance in such a H.Q.was the brainchild of the former G.S.M. Or rather Kal,and in itself is a fitting memorial to that quiet but industrious worker whose motto was “Service to the Community”
Not only was he the local leader of the Scouts,he was also a founder member of this local branch of the Royal British Legion-having served in the K.R.R's (Kings Royal Rifles)in the First World War- was a foundermember and leading light of the “Croxley Society” who are responsiblefor the Revels on the Greeneach year and indeed for today'sseats and for this memorial seat, and served in his declining years as 'President' of the said “Croxley Society”
Croxley Green has such a lot to be thankful for in having a man such as A.B.S.to have lived among them, and I have served under him in the Scout Movement for 25years first in the Rovers and for 12years as S.M (Scoutmaster)Feel intensely proud at being asked to unveil and dedicate this seat on his beloved Green to the memory of A.B.S.(Kal) a worthy Son of Croxley Green.

Percy Graver also one of the original Rover Scouts, a Woodwork teacher at Durrants School was instrumental in the making of the seat.  In his memories taken  during the 1990's he recalls...

I designed the seat and built it. Arthur Barton- Smith used to sit on this spot under the oak tree contemplating what events should take place in the arena for the Revels. For many years it was the Scouts task to go to Croxley House, in one of the out houses to get the posts etc. for the arena with the trek cart. We went about a month beforehand to see if any needed replacing, cracked ones for instance. ABS was our mentor when we were younger. Don Griffen helped me with the seat. We had an old dilapidated scout van that we collected the stones in. A number of us appreciated what he had done for us. We did not want concrete blocks etc.
There was a scout camp behind Chorleywood House and we had seen these stones.We asked the Ricky Council and they gave us permission to go and collect for granite kerbstones. I also designed and made the one for Mr. Jefferies.
We had to put planks in the old van to support the the stones. We had to get permission from Joe Foster, chairman of the Commoners to do this. He gave permission of course.
I made the iron brackets at school to make the supports. These were built into the stonework to support the wood which came from Walkers. I carved Kal in the centre on the back. Mr. Jefferies seat I designed and made too. The wood came from Great Westwood.Timber, home grown, was quite rare then. The seat was originally made of elm wood.

A lot of the scouting had folk lore which was adapted and used in the scouting movement. When we started to build the trek cart which we would sometimes take to Ley Hill the other side of Chesham. It had a long handle and ropes that we pulled it along with.We  used to take twenty or thirty kids. Sometimes it was pouring down with rain and everything and the boys were soaking wet when we got there and we had to light fires to get dry first.

The originals were Dick and Len Denton, Les Lipscombe Geoff Newton and myself. We were attracted to the Scout   Movement- weweretooold for the Church Lads. Blois Bhisshop ket a keep-fit  gymnasium class at the Institute. He was very althetic- a Cambridge Blue, but that was only one houra week so we decided we mustdo
BOB A JOB
One of the most memorable of the scouting movement to raise funds was the yearly 'Bob a job' week. As the name suggest the cubs and scouts would knock on residents doors whether in the town or countryside and offer to do a job for the householder for 'a bob' This was the nickname for one shilling, or twleve pence (old  pre decimal coinage)
The first Bob a Job Week was in April 1949, in which Scouts did small tasks for the public in return for a "bob" (5 new pence) to raise funds for the Association and for "starving Europe”. In 1970 the scheme was renamed 'Scout Job Week in anticipation of the currency changing to decimalisation.
LOCAL EVENTS
The group took part in many local community events  including the following  occasions.
OTHER EVENTS
The original group became great friends and spent holidays together as well as supporting personal occasions
IF YOU CAN HELP FILL IN THE GAPS AND UPDATE US ON THE CURRENT GROUPS IN CROXLEY GREEN …...PLEASE CONTACT OUR WEBSITE HERE