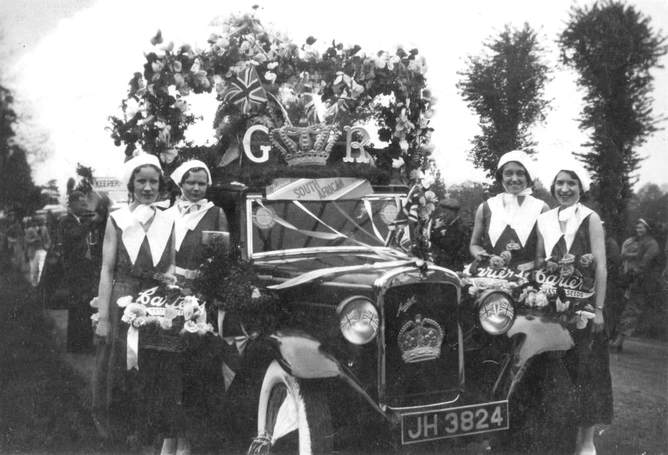 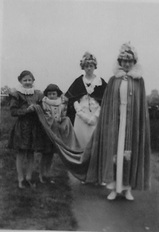 Doris Gibson as the May Queen
Notable events during the first 25 years of King George V‘s reign included World War 1 (1914-1918) and the General Strike in 1926. Inevitably, these events affected the lives of the people of Croxley Green. In addition, the arrival of the Metropolitan Railway and various housing projects heralded a large increase in local population coupled with inevitable changes in the character of the village.

6th May 1935: there was great support for Croxley’s celebrations and, as usual, practically everyone got involved and entered into the celebrations with their usual gusto.

A procession was arranged at 10.15 am starting from The Green near New Road. It made its way to the Watford Road, Dickinson Square, Dickinson Avenue, Yorke Road and returned back onto the Watford Road to continue down Scots Hill to Scotsbridge playing fields. There it met up with a similar procession from Rickmansworth. A short ceremony took place which included the singing of The National Anthem and Land of Hope and Glory. The two processions then moved off in different directions. The Croxley Green procession, which was based on three themes, made its way back up Scots Hill. The first section ‘Croxley Looks Back’  began with The Prehistoric Times, Early Cave Man, Ancient Britons, and The Romans to Norman Times, Plantagenet, Tudor, Stuart and Georgian periods and concluded with Britannia and Empire representatives.

The third section ‘ Croxley at Play’  was depicted with a Carnival King and Queen, Christmas Mummers, The Circus, Going to Widdicome Fair, Village Band, Off to the Football Final and much more. 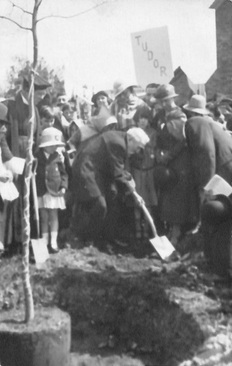 Mr. George Ricketts with the youngest school child, who has since been identified by a family member as Shirley Mavis Howard, aged 8 years
Prior to the procession dispersing at approximately 1 pm, an oak sapling was planted. This was performed by Croxley Green’s oldest inhabitant, Mr George Ricketts, aged 97, aided by the youngest child then attending the local school. They placed the first shovel of earth in the planting. Residents were also invited to add earth and sign a Memorial Record Book during the afternoon. The site chosen was on the corner of New Road opposite the War Memorial.

The afternoon was given over to field sports events and mainly involved the children. Running races covered distances of between 40yds and 100yds. School boys and girls up to the age of 14½ years competed separately.  Also included were relay races, boys’ tug -of-war and a girls’ skipping rope race. A sack race called ‘War of the Roses’ had nine teams competing. To round off the events the men had a ‘tug of war’ whilst the ladies had an egg and spoon race. Other events took place on The Green areas and these included boxing bouts by local youths and a Comic Football match - Trousers v Skirts. There were several other events mainly of the ‘fairground type’ along with stalls, games, shies, competitions, a Punch and Judy show as well as refreshments.

In late afternoon the school children enjoyed a tea party in front of ‘The Cottages’ near the Coach and Horses Public House and approximately 600 Jubilee commemorative mugs were presented. During the remainder of the day residents took part in various activities around the village. Musical entertainment in the form of a concert party was arranged for 4.30-5.30 pm. It was directed by Mr J Tandy and included a performance by the Croxley Choral Society, conducted by Mr Dutton Harrison (this type of event was usually held in the hall at the rear of the Guildhouse).

The evening was also given over for the enjoyment of more musical entertainment with community singing and a concert party by the Legion Frontiersmen Band. At 8 pm the Kings speech was transmitted. Mrs Charles Barton-Smith presented prizes won at the events held that day whilst those who wished could enjoy dancing on the Green at 9 pm. The Green was also used for a firework display and residents could join in a torch lit procession leaving from the Memorial to light the bonfire at 10.30 pm. At 11.15 pm everyone joined in singing Auld Lang Syne before making their way home.