For many centuries long before paper and writing implements were available for drawing up official documents, it would be the responsibility of a learned and a professional person to provide these services. Parchment, which is prepared animal skins  including sheep or goat skin, was more often used. However good quality vellum, the highest quality skin used, tended to be made from the skin of young animals (lambs or kids ) Both formed a smooth surface to write on and were very durable.

A quill pen was used as a writing implement and obtained from a molted flight feather, preferably a primary wing feather from a large bird. Later came a dip pen, a metal-nibbed pen, the fountain pen and eventually the ballpoint pen.

There were two basic coloured inks used as the medium, black that (tended to fade in time to brown) and red.
Black ink was either made from carbon (charcoal or lamp-black) or a compound of iron and gall. Gall comes from ‘oak apples’ which are growths on the bark of oak trees caused by gall wasps laying their eggs there. Red was used for highlighting, and was known as rubrication (which comes from Latin and literally means ‘reddening’). Rubrication was used for marking and highlighting points of interest etc. in a document.
Prior to the eighteenth century the then standard literary medium was Latin before the change to English. When local dignitaries and notable people were required to produce official documents, the services  of a professional person who was accomplished in Latin would be required. It was the custom to have  the purchase and exchange of land and property for instance written in Latin.

As these and other types of documents become available, and with the valued assistance of local residents who have the skills to translate them, we will have them recorded on the website .
Note: the Latin is highly abbreviated; I have extended some of the abbreviations and provided a full translation, which I have tried to make not too stilted.
Heather Falvey

(© loaned by David Loose)
(Kindly translated by Heather Falvey)
​[margin] Maner[ium] de Croxley   The Manor of Croxley
Curia Baron’ vernerabilis viri Joh[ann]is Gostlin in Medicina Doctor’, M[agist]ri sive Custod’ [line filler] Collegij de Gonvill et Caius in univ[er]sitat’ Cantabrig[iensis] et Socio[rum] eiusd[e]m Collegij Tent’ ib[idem] vicesimo \primo/ die Maij 1623 Annoque R[egni]R[egis] Jacobi dei gra[cia] Anglie Franc’ et Hib[er]nie fidei defensor’ &c vicesimo primo et Scotie quinquagesimo sexton, Coram Thoma Fotherley Ar[migero] Senescall’ Man[er]ij predcit’
Court Baron of the venerable John Gostlin, Doctor of Medicine, Master or Warden of the College of Gonville and Caius in the University of Cambridge and [court] of the fellows of the same college held there [i.e. Croxley] on the 21st day of May 1623 and in the year of the reign of King James, by the grace of God of England, France and Ireland, defender of the faith &c, the 21st and of Scotland the 56th, before Thomas Fotherley esquire, steward of the aforesaid manor.
[margin] Fin’ iij li  sol’  Fine £3 paid
Ad hanc Cur’ venit Nicholaus Aldwyn et Dorothea uxor eius, ipsa sola et secret’ exa[m]i[n]ab’, Coram Senescall’predict’ et sursu[m] Redd’ in manus d[omi]ni un[um] Cl’m terr[ae] Customar’ cu[m] p[er]tin’ vocat’ sive Cognit’ p[ro] nomen de Clobbes Continen’ per estimac[i]o[n]em septem acr’ sive plus sive minus [next line and a bit crossed out; or filled in] An[n]ual’ Redd’ duo[rum] solid’. Ac etiam un[um]  Pictellu[m] terr’ Customar’ cu[m] p[er]tin’ vocat’ Clobbes pictell Continen’ per estimac[i]o[n]em un[am] acr[am] sive plus sive minus An[n]ual’ Redd’ quatuor denar’ Ad opus et usuu’ Petri Lacke hered’ et ass’s suo[rum] imp[er]petuu[m].  Cui d[omi]ni per Senescall’ predict’ Concess’ ei inde seisina’ per virgam. H’end’ et Tenend’ premiss’s predict’, sibi et hered’ suis imp[er]petuu[m] Ad voluntatem d[omi]no[rum] s[e]c[un]d[u]m [line filler] Consuetud’ Maner’ predict’ per Redd’ et servic’ inde prius debit’ et de iure Consuet’.  Et dat’ d[omi]nos de Fine prout patet in Capite, fecit d[omi]nos fidelitat’, Et Admiss[u]s est inde Tenens
Ex’ p[er] Tho’ Fotherley S[e]n’llo
1623
To this court came Nicholas Aldwyn, and his wife Dorothy having been examined/questioned on her own and in private, in the presence of the aforesaid steward and rendered into the hands of the lord [of the manor] one close of customary land, with its appurtenances, called or known by the name of Clobbes, containing by estimation seven acres, more or less, with the annual rent of 2 shillings and also one pightle of customary land with its appurtenances called Clobbes pictell, containing by estimation one acre, more or less, with the annual rent of 4 pence, to the customary service and use of Peter Lacke, his heirs and assigns forever, to whom the lord [of the manor] through his steward aforesaid granted seisin by the rod, [he] having and holding the aforesaid premises and his heirs forever at the will of the lords according to the custom of the manor aforesaid by rents and services from there previously due and by rightful custom. And [he, i.e. Peter] gave to the lords as a fine as appears above his name [i.e. in the margin]. He made fealty to the lords and was admitted thence as the tenant.
Examined by Thomas Fotherley, steward, 1623
[i.e. Fotherley has verified this copy of the tenancy, which would have been given to the tenant] 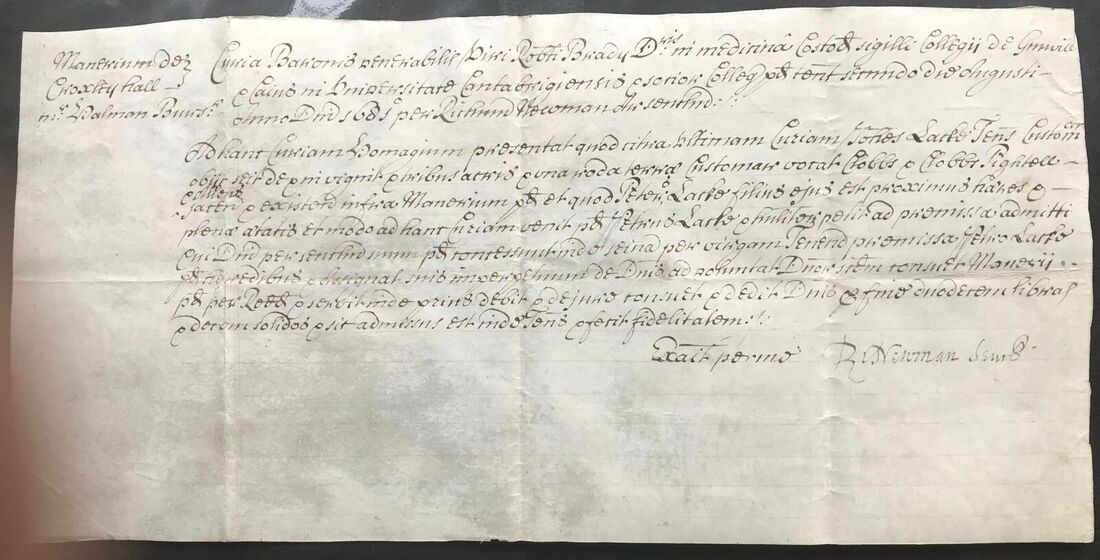 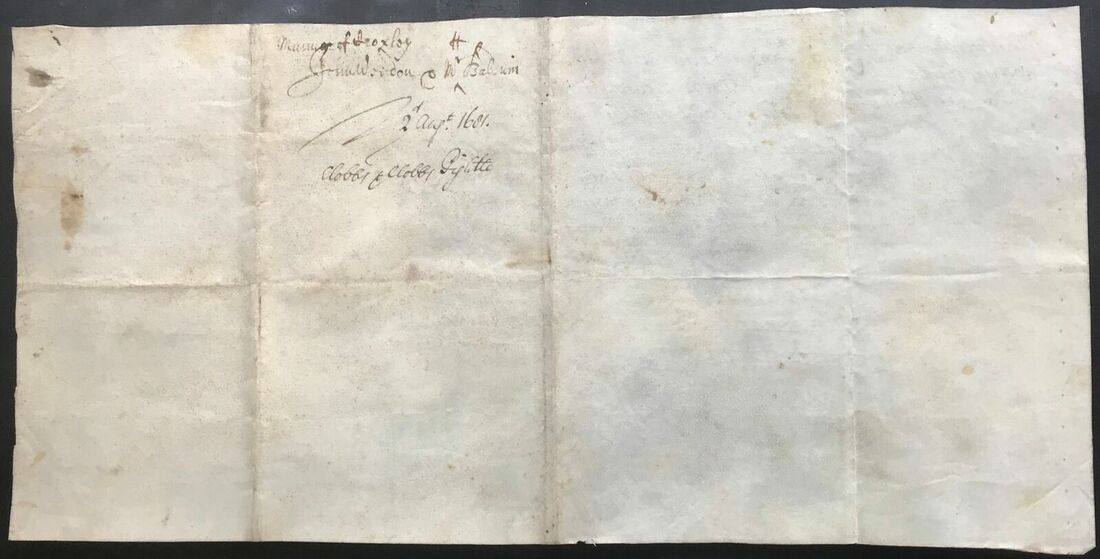 (© loaned by David Loose)
(Kindly translated by Heather Falvey)
Examined by me, Richard Newman, steward [i.e. he verified this copy of the tenancy, which would have been given to the tenant]
[reverse] Manor of Croxley
John Wedon & W[i]ll[iam] Baldwin
2d Aug[us]t 1681
Clobbs & Clobbs Piglitte [misreading]