​The following has kindly been submitted by Lyn Dyke (nee Rosalyn Oliver), daughter of Mrs. G. L. Oliver. It captures an insight into the opportunities for local young ladies to advance their career and giving them an opportunity to learn typing skills that were not available on many school’s Timetable. However, several local Secondary Modern Schools did adopt this opportunity many years later after WW2. 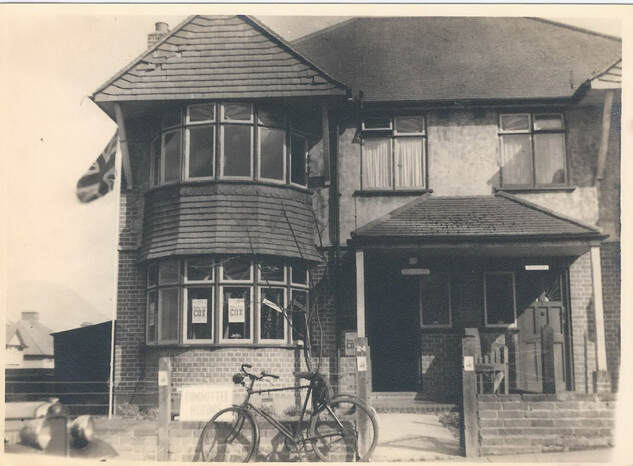 (© loaned by Lyn Dyke) 24 Durrants Drive, the Commercial College run by Mrs G. L Oliver and also the family home. Taken in 1947 at the time of an election.
Croxley Commercial College was run by Mrs G. L Oliver from 1940 until the mid to late 1970s.  It was located at 24 Durrants Drive, where the main bedroom in the front of the house was converted into the school room with 7 desks around the walls each with a typewriter with a wooden shield over the keyboard to encourage touch-typing. A large table in the middle of the room was used by those learning Pitman’s shorthand. On one wall was a low bookcase atop of which was a large blackboard. A small cupboard for supplies behind the door was the base for a wind-up gramophone. The 78 rpm records were used for pupils to learn to type to the underlying rhythm of the classical music pieces.  Mrs. Oliver also had a desk in the corner of the room.
Out on the landing at the top of the stairs was an open set of shelves for day pupils to leave their books and papers overnight. It is thought there may have been a similar establishment in existence at number 24 prior to Mrs. Oliver’s ownership.  Mrs. Oliver’s mother, Mrs. L. Richardson, had run a similar establishment in Winchmore Hill, prior to 1940, until she was killed in a bombing raid. At number 22 Durrants Drive were a couple of the Croxley family, Mr & Mrs. Dorrofield.
Lessons were given each day for 2 hours in the morning and afternoon, and after the Second World War evening classes were offered also twice a week from 6pm until 9pm.  At times Mrs. Oliver had help from one or two ladies in the village, one being a Mrs. Dracup, from Hastings Way and a Mrs Holland, also from Durrants Drive.  Students were trained to take Pitman’s and RSA certificates in both disciplines, up to advanced level. Exams were held twice a year, invigilated by independent adjudicators approved by both Pitman’s and The Royal Society of Arts.
From throughout the local area Mrs. Oliver was frequently approached by professional and commercial businesses to recommend students who were close to qualifying with offers of employment, Mrs. Oliver’s standard of student being very well valued and respected.”
Note: Pitman’s Shorthand was introduced and invented by Sir Isaac Pitman who published his first paper in 1837. His unique method of writing symbols representing the spoken word as a phonetic and speedier system of recording dictation and was originally called phonography. With the invention of the typewriter in 1868, leading to its commercial production in the 1880’s this increased the clerical duties and office status for women who were known as Stenographers. Large offices would eventually employ many ladies who would sit in rows typing and they were known as ‘typing pools’
Over the years other forms of shorthand were introduced but it was considered a great asset to have Pitman Shorthand experience on ones CV. (Curriculum Vitae )
Although computers may have overtaken the modern office ‘stenography’ is still widely used.