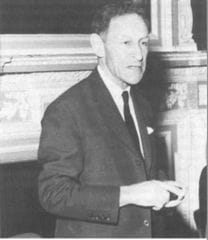 Dr. Julius Grant
Dr  Julius Grant was born on 19th October 1901 in the East End of London. He was always interested in chemistry,  He attended evening classes at Queen Mary's College, London, obtaining a degree in chemistry and then went on to take his doctorate at King's College, with the intention of eventually working in a laboratory.
In 1931 Dr Grant joined John Dickinson at Croxley Mills as one of the first qualified scientists to be employed by the British paper industry. It was soon after the discovery of Tutankhamen's tomb and on joining the company he was asked to analyse the material of the mummified king.
During World War Two, Grant used his expert knowledge in the properties of paper to develop specialist papers for war related activities. Secret agents working with M16 could benefit from messages sent to them on edible paper which once read could then be eaten! He also developed special paper for ration books that could not readily be forged.
After the war Grant joined a chemical forensic and analysts company, Hehner & Cox of Fenchurch Street, London,. Following the death of Cox he was appointed Managing Director, a post which he continued to hold into the 1980s.  His expertise in the properties of paper became recognised throughout the world. He was frequently called upon to give his professional opinion on cases where the outcome was crucial in deciding important matters.
The following are examples of a few of these cases where his skills were used to scrutinise evidence submitted to determine an accurate conclusion, especially in paper related forgeries.
Grant was President of the Medico-Legal Society between 1973-75 and was known to have handled up to five hundred cases each year. He was also a prolific author, writing at least twenty eight books on his subject.

Dr Julius Grant was married twice and lived for thirty years (from 1966 until his death in 1991) on Friday Island - an island in the River Thames at Old Windsor, Berkshire on the reach above Bell Weir Lock, just short of Old Windsor Lock. The small island, whose shape is said to resemble the footprint of Man Friday in Daniel Defoe's 1719 novel Robinson Crusoe, contains a two-bedroom cottage.
Taken from
The Daily Telegraph obituary  July 1991
Obituary of Julius Grant T. S. Shepherd
The Forensic Historian by Robert C Williams