Francis Beckett was born in the village of Chenies, where his parents, John Beckett and Anne Cutmore, lived.  His birthday was 12th May 1945, four days after the WW2 with Germany ended. The village of Chenies was owned by the Duke of Bedford. The Dukes of Bedford's ancestral home is Woburn Abbey, Bedfordshire, approximately thirty miles away from the village.
In 1949 his parents moved to Croxley Green, to live in a house bought by the Duke of Bedford.  It was called The Firs in Loudwater Lane just off The Green and was set in approximately thirteen acres with a cottage for the gardener.  The family renamed the house Thurlwood House 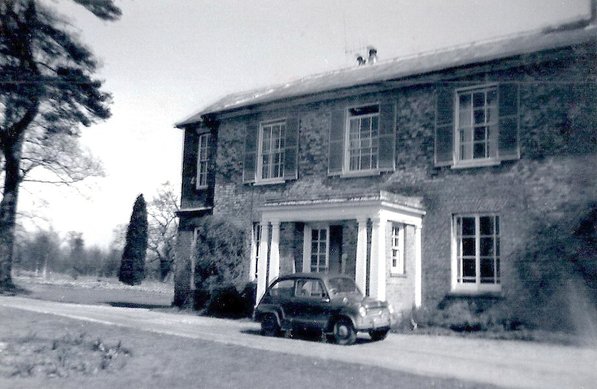 Francis remembers Mr. Arch his English teacher as well as Miss Collings who taught Latin. The school had various clubs for the pupils during break-times.
Whilst his son was at the school Francis’s father donated a grand piano from Thurlwood House to the Grammar School.  This was received with huge appreciation.
In 1958  Francis’s father had new plans for his eldest son. John Beckett was persuaded to send Francis  to Beaumont College, a Jesuit boarding/day school near Windsor, Berkshire, and withdrew him from the Grammar School.  Unfortunately for Rickmansworth School, the 'ownership' of the grand piano was withdrawn at the same time and it followed Francis to his new school.

Part of the Beaumont School education system involved a College Cadet Force where pupils had an opportunity to become officers in the army. Conscription was still in force and  Beaumont College pupils would automatically bypass the standard soldier's entry.
It was compulsory at the end of WW2 for a young man between the age of seventeen and twenty-one years to serve for eighteen months in one of the three armed forces, the Army, Navy or Air Force. They were expected to leave their normal employment to do their ‘National Service’. In certain professions or circumstances, if it was considered a priority, young men were exempt. This system only ceased in 1960.

Francis considered his education was of a higher standard at the Grammar School and this was very apparent when he first started at the private school. For a period during his four years at Beaumont College school Francis was a boarder. It was not an ideal experience for him as corporal punishment was readily given to boys for very small wrongdoings.
John's father had begun to write his memoirs and he related some of his experiences to Francis as a schoolboy. He listened, fascinated, to the stories of the famous people and events his father had been involved with.
On leaving Beaumont School Francis joined the London City of Westminster Further Education College to take his  A-levels. Keele University, Staffordshire, was the next stage for Francis where he studied history and philosophy. Whilst at Keele he was selected by the English Speaking Union to be one of the two British student representatives to tour the USA in 1969 for a series of debates.
During his active career Francis worked as a journalist, a teacher, an adult education lecturer, and West Midlands organiser for the housing charity Shelter, before becoming head of the press and publications department at the National Union of Students. He was President of the National Union of Journalists in 1980, and worked as a Labour Party press officer during 1983–84. In 1983 he worked for the unsuccessful Labour Party deputy leadership campaign of John Silkin.
Since 1984 he has been a freelance writer. He contributed regularly to The Guardian and The Independant for fifteen years and was education correspondent of the New Statesman for seven years. He has also written on politics, industrial relations, business and management, and the theatre.  In 2017 Francis became editor of Third Age Matters, the national magazine published by the University of the Third Age.
Francis Beckett's latest book about his father John Beckett is Fascist in the Family (The tragedy of John Beckett MP) Published by Routledge ISBN 978 -1-138-90787-4
His account gives an insight into the turbulent and changing times this country was facing between WW1 and WW2 with which his father was associated.
Taken from Fascist in the Family (The tragedy of John Beckett MP)  by  Francis Beckett
Published by Routledge ISBN 978 -1-138-90787-4 www.routledge.com  as well as information from on-line historical websites and documents.