​CONCEPTION: Until 2018, Croxley Green had four village memorials to those killed on the battlefields of WWI and later wars: two on the Green, one inside All Saints’ Church and another overlooking the Church’s Garden of Remembrance recording those killed who had worked at Dickinson’s paper mills, the major employer in the area at the time.

In 2014/15 a wish was conceived, born and fostered in the village, for a new - but more importantly, new style of - memorial; a wish prompted, at least in part, by local historian Brian Thomson’s 2014 book, Croxley Green in the First World War: the story of a Hertfordshire village 1914-1919

In particular, and strikingly, the new memorial was intended to do more than duplicate those existing ones, but rather prompt reflection of the village as a whole where the men who went to the battlefields had grown up; the tragedies the war had visited on, and the changes it engendered in, the families of the village.

Over time a vague, unformed, wish crystallised into something concrete; a proposal for engraved glass double doors to replace the main inner doors of All Saints’ Church.

CREATION: In late 2016, with the help of the Diocesan office and the Secretary of the Guild of Glass Engravers, we found exactly the right designer and engraver: Winchester-based Tracey Sheppard. A small steering group was set up representing the village, the Church and the Diocese to brief Tracey and to oversee the project to its completion, including raising the necessary money. On the advice of the church surveyor a joiner, Mark Glendinning, was commissioned to build the oak frames and hang the doors.

Although hanging in All Saints’ Church, the doors are very much a village project, supported by local fundraising and personal donations, as well as grants from Croxley Green Parish Council, Three Rivers District Council, Hertfordshire County Council, Croxley Green Residents Association and the Croxley Branch of the Royal British Legion, from All Saints’ itself and at a national level, the All Churches Trust. The new doors are a unique and beautiful artwork; both a reflection and piece of the village’s heritage and perhaps that of the wider world. It is hoped they will inspire reflection of the events of a century ago; how nations and governments sleepwalked into a murderous world-wide conflict; and the price paid, not just by the many millions who gave up their lives on the battlefields, but the many more millions in towns and villages whose lives were changed by the war, both in the short and much longer term, and its effects at the level of everyday family and village life. 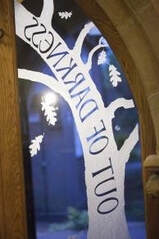 CONNOTATION: TRAGEDY AND CHANGE Death in action brought suffering, grief and often destitution to both those left behind and to many of those returning, injured mentally, physically and emotionally. But there was also resilience, a springing back, a trust in better. The message of Christianity is one of hope and trust. Of something good arising from something bad. Death followed by Resurrection. Tracey’s design contrasts the dark with the light. The words ‘Out of darkness let light shine,’ 2 Corinthians 4:6, offer hope after the tumultuous and terrible events of WW1.

One result of the role women played in WWI led to their being given the vote. 2018 also marks the centenary of the passing of the Representation of the People Act, the first political move to extend the vote to women since their denial of voting rights by the Great Reform Act of 1842. The doors embody all these themes; their design and symbolism springing from the words, ‘Out

of darkness let light shine.’ In the left hand panel, the first three words of the phrase are carved into the trunk of an oak tree, offering those entering the church the chance to come ‘Out of darkness’. An oak tree on The Green was planted at the suggestion of the then headmaster of the Boys’ School, H. T. ‘Neggy’ Wilson, “in memory of those men from the village who had died in the war.” In Christian symbolism, oak trees are often used to represent the cross; here the oak tree is a main part of the design, as well as its frame. 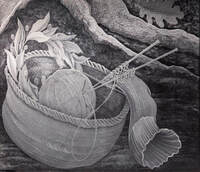 ​In the left hand panel, the tree’s branches are bare, their leaves falling and reminding us of the lives lost. The tree grows in a barren landscape where only broken stubble and ridges of old furrows remain. These could be seen to represent the trenches of the battlefields.

An abandoned basket lies at the tree’s base. In it is a half-finished sock, suggesting that the knitter has lost the man for whom she was making it. Making socks for ‘Tommy’ was something that the women of Britain were called upon to do as part of the war effort. The basket also holds a laurel wreath. Laurel is a symbol of triumph and eternity. It became a tradition for the girls of Croxley Green to make laurel festoons for the railings that surround the memorial oak as an act of commemoration. The memorial plaque on the south wall of the church has a broad decorative band of laurel.

The branches spread across the top of the right-hand panel of the doors, where now they are no longer bare but full of leaf, and so life, perhaps suggesting the resurrection. The second half of the quotation, ‘Let light shine’, sits amongst the leaves and can be read from inside the church as a message to carry out into the world.
​Three birds fly across the glass – birds have often been used to signify the soul being released to fly heavenwards. These particular birds are lapwings which villager Frank Paddick recalls seeing in ‘great flocks which flew round and round the village’ in
his book A Village Boyhood in Croxley Green. They would have been a sight familiar to the local men who had gone to the world’s battlefields.

The land beneath is full of signs of growing food. Croxley Green was farming country. The nation still had to be fed, even with its men now digging trenches and burying their comrades rather than tilling fields. A single figure dressed in a pinafore and long skirts digs up potatoes. She represents the many women who found themselves not only home- makers but obliged to take up the role of agricultural labourers while the men were away fighting. In the foreground, a fork is left standing with a Woman’s Land Army hat hanging on the handle. Either the owner has taken a break from her digging, or the war has ended and neither are needed by her any more. Fork and hat serve as reminders that the place and part played role by women in Croxley Green, as in the world outside, were changed once and for all by the ‘war to end wars’.
CONSECRATION: It was always intended that the doors would be in place in time for the Armistice celebration on 11 November 2018. It was a near-run thing. Two years in the planning and construction, the doors were hung with only a month to spare, and consecrated on 14 October in a spectacular, beautiful and moving service by Alan, Lord Bishop of St Albans. Robert Voss CBE, Lord Lieutenant of Hertfordshire, deputised for Her Majesty. Mark Saxon, Chair of the Croxley Green Parish Council and Ray Baxter, Chair of the Croxley Branch of the Royal British Legion, were in attendance The Church was full to overflowing with villagers and friends.

The Parish Council generously paid for a sumptuous tea in the church hall, to round off the ceremony in a rather splendid and much enjoyed way. 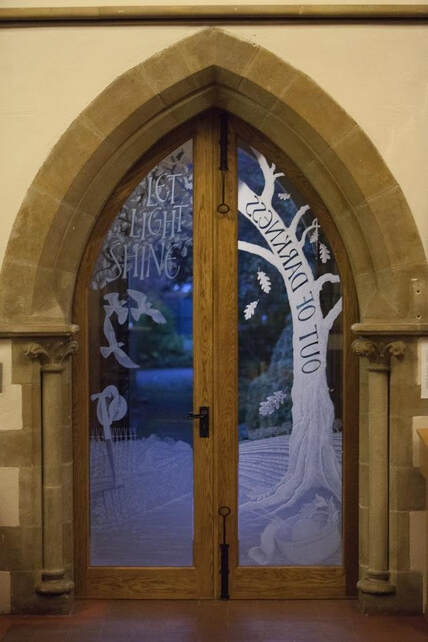 Blessing of the World War 1 memorial doors took place on Sunday 14th October 2018. The doors were blessed by The Right Reverend Dr Alan Smith, Bishop of St. Albans. The event took place at All Saints Church and was followed by a reception in the All Saints Parish Hall that was kindly hosted by Croxley Green Parish Council. Below is a copy of the Order of Service.