The Coronation of Edward VII and Queen Alexandra 1902 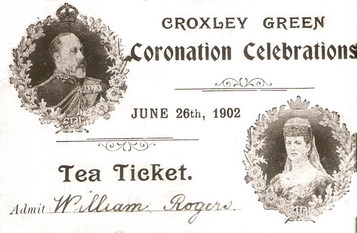 Copy of a tea ticket for William Rogers
Young girls, under the guidance of Miss Clarke and the school teachers, performed traditional Maypole dancing.  Mr. Pyne’s ‘Negro Banjo Band’ pleased the crowd, and the Naval Brigade, together with some British troops, re-enacted a Boer War battle.

There was suitable entertainment for children: Punch and Judy, swings and tea in Mr. Stone’s Orchard. Each child was presented with a commemorative coronation mug. The day ended with a torch lit parade at 9 pm and a magnificent display of fireworks, which lasted for an hour and half, donated by Mr Newall of Redheath. The huge crowd expressed its appreciation with loud and prolonged applause. Despite the occasional presence of some rain and wind, the event was a great success.