Durrants House has been on this site from approximately 1866/67 and was built for Thomas Hoade Woods a partner in the auctioneering firm of Christie, Manson and Woods, now most popularly known just as ‘Christies’. Woods purchased the Durrants farm possibly at the time of  the advertisement (see below). and had the attractive Tudor type mansion built,  Eventually over a period he purchased 224 acres altogether.
Rousebarn farm appears to be part of the estate bought by Woods, as seen from the estate map. There is a direct route from the house to the farm which suggests this. The farmhouse fell into disrepair and was demolished (date not known) but a barn remained standing in the 1990's  until it too was dismantled for safety reasons. Older maps show various spellings for Rousebarn as well as its location from the farmhouse towards Croxley Green. 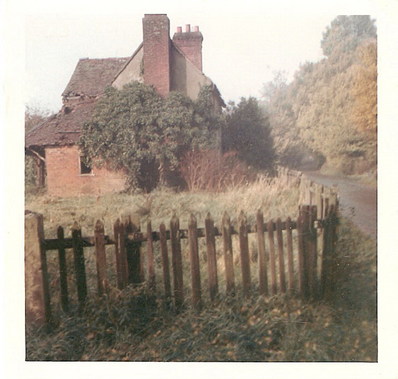 Rousebarn Farm
Woods retired to Bournemouth in 1903 and passed away unmarried in 1906 aged 76. His estate at that time, together with an outstanding collection of paintings and drawings, was valued at half a million pounds.

Durrants Estate was sold to Charles Morland Agnew of Thos. Agnew & Sons, Fine Art Dealers. He died in May 1931 and in 1933 Durrants was sold to Headstone Manor Estates Ltd., that was taken over by Croxley Estates Ltd. They developed much of the estate with semi-detached houses/bungalows and detached homes to accommodate the growing population of Metroland using Arthur Pitkin and F J Simmonds as builders. Detached and semi- detached houses were for sale from £600 to £1000, with £35 deposit and 19 shillings and 7 pence repayments which apparently included the ‘rates’. Prospective buyers could make enquiries at the Old Merchant Taylors’ Sports Club and show houses were soon erected for viewing.

Old Merchant Taylors’ school, founded in London and situated in Charterhouse Square in the 1930’s, was seeking alternative accommodation outside the city. Land was acquired by the school and a move to the Sandy Lodge/Moor Park Estate took place in 1933. However, as their playing fields were still in Catford, South London, Durrants House and additional adjacent land was purchased in 1936 by the school. The grounds were required for sports facilities including rugby and the house converted to a clubhouse.  In 1947 an Old Merchant Taylors’ society was formed and the conservatory was demolished in 1964 to make way for squash courts which eventually provided greater facilities to allow non members to join the club.

The development of the housing estate lay to the north of Baldwins Lane bounded by Little Green Lane and Rousebarn Lane.

During the time when the  estate was developed  into a  'ribbon style' 56 "printers houses" (for Sun Printers workers) in Durrants Drive were submitted for planning permission in January 1950, renewed in July 1952 by Dawe, Carter & Partners of 53 Clarendon Road Watford.  Thirty more dwellings were accepted in August 1953 (now 51- 86 Durrants Drive) and completed the following year for occupation.

A second development of 16 "printers houses" (87-94 Durrants Drive) were built three years later in 1957 whilst others were built in the vicinity including Links Way in the late 1950’s.

Many of the roads were named after large towns in England.