(© CGPC) Pipe Laying
The primary purpose is to meet the growth in the demand for water and a secondary reason is to reinforce and eventually replace the 250mm main linking Hunton Bridge and Rickmansworth which is over 50 years old.

The growth in demand is due in part to new development, both residential and industrial, and in part to increased per capita usage arising from the growing use of household appliances such as dishwashers and washing machines.

Forecasts of future demand suggest that there will be a shortage at peak times in Loudwater, Croxley Green, Abbots Langley and Hemel Hempstead.

The poor summers over the last few years have masked the underlying growth but it is forecast that with normal summers, this main will provide for growth ever the next twenty years. It will also provide additional security in the event of a failure of one of the older mains.

Route of the Main

The main is required to convey water from the source to the four areas expected to be in deficit. The route through the Green at Croxley was selected as the most effective and economic option. It will 'also link up logically with the existing mains system. It will cause the least disruption to traffic and least 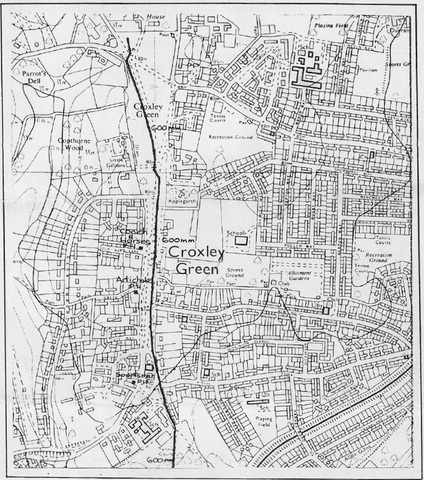 (© CGPC) Map of the route of the pipe across The Green

The timing of the construction has been carefully chosen after lengthy consultations so as to cause the least problems to the owners of the land crossed and to the residents fronting onto the route. The stretch next to the coarse fish.ii1gwaters will be laid during the close season, the section by the trout fishing lake will be laid in August, with the section near the school being constructed during the school holidays. It is intended to complete the section through the Green so that reseeding can take place this Autumn.

The precise timing for the crossing of the Green very much depends on the progress the Contractor makes on other sections of the route. Strict timing is laid down for the sections by the school and the fishing lakes. The section south of the canal is dependent on the weather because of the boggy nature of the ground.

The whole length of the main across the Green will be fenced off in a series of enclosures except for access to the houses. The fences will remain in position until next Spring. The top soil will be stripped over a width of same 14 metres (where possible) I and laid to one side. The pipes will be strung out inside those compounds, then the excavation of the main will begin within each enclosure in turn. It is expected that five pipes 5.5 metres long will be laid each day. Actual progress will depend on conditions and will be affected by road, path and service pipe crossings. The trench will be 900mm(3ft.) wide by 2m (6ft.) deep.

None of the roads other than All Saints Lane and the road behind the Church will be closed. Access to properties will be disrupted for only a short time and planned access to or egress from houses can be arranged by speaking to our Resident Engineer, Mr. Ron May.

When trenches are open heavy steel plates will be on hand to bridge over the trench. Arrangements have been made for the houses fronting onto All Saints Lane to have access via the school, and the houses behind All Saints Church will have access either off the Green or off Watford Road. The main and associated works will cost £1 million.

By the Spring of 1989, the Green and all the roads will be fully reinstated. Any sign of the work will have disappeared by the time the spring grass on the Green has fully grown. A few years ago we laid a similar size main across Chorleywood Common and after a relatively short time there were no visible signs of the work.

The Contractor will be directed: to take every care particularly when passing the memorial seat and the memorial oaks. One or two of the oaks may have to be trimmed to avoid damage by the excavator. This will be done by a tree surgeon and.every effort will be made to preserve the symmetry of the tree.

The trench for the main through the woods will be mostly in the roadway or just to the east of the road. None of the mature oaks. will be felled. The smaller trees and undergrowth to the east of the road will be cut down to ground level. Soil will be loaded straight onto a dumper and put back in the trench as soon as the pipe is laid. It is expected that, as the roots will not be grubbed out, most of the vegetation will quickly regenerate.

The Water Company are employing Consulting Engineers, R.T. James & Partners of Rickmansworth to design and supervise the works. Mr. Ron May, will be representing both the Company and the Engineers on site. Anyone with problems arising from the work should contact him at his site office in front of Rickmansworth School.

The Contractors are R.E. Docwra Ltd., of Coppermill Lane, Harefield.

We regret any inconvenience this main laying may cause. We will make every effort to keep disturbance to a minimum and to Complete the work as quickly as possible and to ensure that effective restoration is carried out. The main is absolutely necessary for safeguarding the adequacy of water supplies for the future. No one has yet invented an economic way of transporting water apart from in pipes! 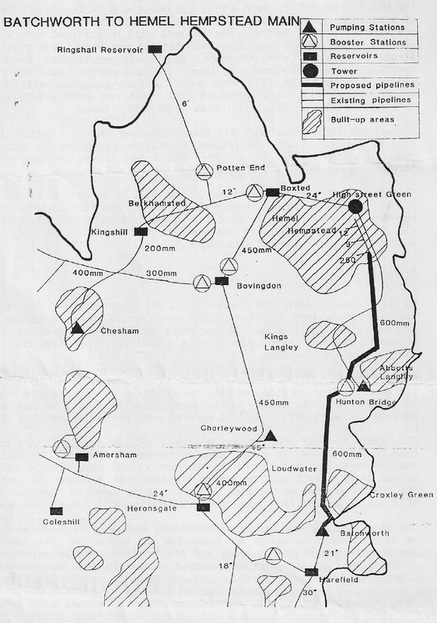 (© CGPC)
The current Parish Council information can be accessed from their website at www.croxleygreen-pc.gov.uk