Commemorative Trees on the Village Green

Lynn Withington - June 2022
1897 8th December. The Diamond Jubilee of Queen Victoria. The plaque reminds us that she was both Queen and Empress: Victoria Regina Imperatrix “V R I 1837-1897”.
(The tree planted to mark the coronation of Edward VII in 1902 was destroyed sometime after 1953 and not replaced. It stood near the site of the 2012 tree.)

1911 The Coronation of King George V was lavishly celebrated with a huge fancy dress procession, maypole dancing, sports and fireworks.

1919 2nd November. The Memorial Oak, beside the war memorial, to commemorate those who lost their lives in WWI. The villagers raised the money for the tree by purchasing special little lapel badges and it was planted by ex-servicemen. The tree was protected by railings as cows were herded daily across the Green to the milking parlour on Scots Hill. The original tree died and was replaced in the 1980s. The iron bench was added in 2018 to mark the centenary of the Armistice.

1935 6th May. The Silver Jubilee of George V. The plaque reads “GR PER ANNOS XXV”. The day was celebrated in style with a procession, sports events and fireworks.

1936 To commemorate the short reign of Edward VIII who was not crowned and abdicated the day after the tree was planted! The plaque reads “ER REX 1936”.

1937 12th May. The Coronation of George VI took place on the day planned forEdward’s coronation. The plaque reads “G R CORONATUS 1937”. This tree is a replacement for the original which died and has stood here since 1973, having been planted as part of the Blue Peter campaign to “plant a tree in ‘73”.

1945 19th November. The Victory Oak behind the bench on the “triangle” at the top of The Green to mark the end of WWII.
During WWII the metal railings around all the commemorative trees were removed for the war effort but Colonel Woolrych of Parrotts Farm recovered and stored the metal plaques until they could be replaced after the war.

1953 2nd June. The Coronation of Elizabeth II. The oak was planted on Coronation Day outside Providence Hall during the village celebrations. The plaque reads “ER 1953”

1965 28th November. The tall pointed conifer in front of Croxley House at the far end of The Green was planted after the death of Winston Churchill. The plaque simply bears his name.

1977 2nd July. The Silver Jubilee of Elizabeth II. This is the low spreading oak outside Hollow Tree House. It was planted on the Jubilee themed Revels Day.

2000 10th December. The Millennium Oak in the “triangle” behind the Victory Oak. Under the tree is a lump of Hertfordshire puddingstone. The plaque reads “This oak tree commemorates that 5000 people from Croxley Green gathered near here on 31 December 1999 to welcome in the new millennium.”

2022 The Platinum Jubilee of Elizabeth II. Three oak saplings were planted in front of Croxley House. 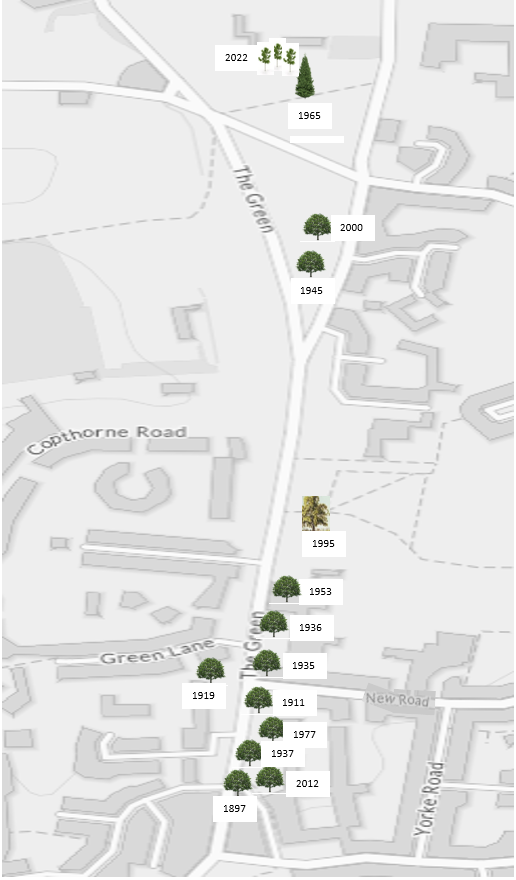 Location map of trees on the village green