At the start of the First World War in every village, town and city, men were encouraged to enlist and support the UK and Allied Forces in Europe. The fatalities were so great that conscription was soon introduced.
The recruits presented themselves at the enrolment centres to be assessed and their  personal details were recorded. This basic information included their name, address date of birth, mother’s name and a physical description. The name of the Army unit they were assigned to was also entered and this information was recorded manually. At this time a pen with a single metal nib without a reservoir to hold the ink was used. This was constantly dipped into a bottle of ink. War progressed, the movements and condition of health of each soldier were recorded in a similar manner.
At the end of the war the army records were collated and stored in various buildings around the country. However, during WW2 many of these records were destroyed when these buildings were bombed. Of those that survived, many were damaged by water or partially burnt. These records were eventually to find their way to the National Archives at Kew where they were filmed and made available to view via many websites.

Tracing the Soldiers connected with Croxley Green
From early 2018, a group of residents representing the Community Club, Croxley Green Residents Association, Croxley Green History Project, Royal British Legion and Croxley Green Parish Council met on a regular basis to consider ways in which the community could remember the 100th Anniversary of the cessation of hostilities of World War One on the 11th November 1918

It had already been decided by the Croxley Green History Project in 2017 to make a start on investigate how many men associated with Croxley Green had served in the War, both those who had lost their lives and those who had survived. It was agreed all should be remembered and documented. Several local memorials exist that have the names of the fallen (though these proved not to be a complete record), but to find those men that had returned and survived, we relied on several other sources. Websites were a good starting point as well as many local and past residents who were able to assist us. The Frogmore Paper Mill, at Apsley, who hold the archive of those who had worked at the Croxley Green John Dickinson paper mill was another avenue. After many months, a spread sheet was compiled of 412 men, divided into those killed and those who had survived. The list can be viewed HERE

Creating the  Window Posters in Remembrance  of the Soldiers
Everyone felt that it was important that all the men who had left the village to fight in this ‘war to end all wars’ should be remembered, not only those who lost their lives but also those who returned to face more challenges. It was decided that some visual means should be found to draw the attention of today’s community to the men.  The soldiers’ original addresses were checked from the spread sheet and it was possible to identify 287 names where the properties were still accessible.

Two A4 posters were designed that would distinguish between those who died and those who returned home. A letter delivered to each of these homes set out the plan to have a poster for each named soldier which could be displayed in the house window throughout November.  It was, of course, to be completely voluntary to take part.

Stroma Digital Printing, Slough, generously printed and laminated for free the A4 posters with a simple single stemmed poppy and bud.  The name and address for each serviceman was given, and  ‘Lest we forget’  added for the Fallen.  Without exception all the homes that could be contacted were delighted and felt honoured to accept and display the posters.
The Remembrance Posters for those men who served and lost their lives and those that survived and returned home can be accessed in the following order.
New Road, Dickinson Square, Yorke Road. Remainder of properties situated in the original Parish Boundary. 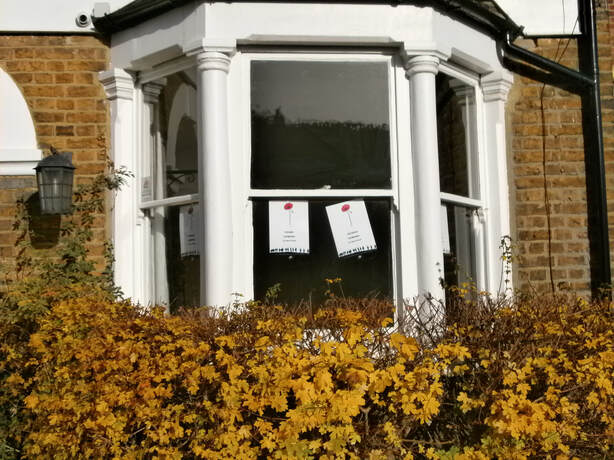