Aerial shot of the Scots Hill Area of Croxley Green

This aerial photograph taken in the early 1970’s shows many changes about to take place in this area. The buildings on the left are Rickmansworth School. Scots Hill is still single carriageway and about to have the upside created. Property at the lower end is being demolished for this purpose including Highfield House a large Victorian house and part of a large estate. Several homes as well as commercial buildings made way for this improvement as the hill was causing huge vehicle problems. Accidents and breakdowns were a common occurrence, clogging up a main route. The Windmill can be seen quite clearly central as the Windmill Estate has not been built. There are various buildings on this site that also had to be cleared. Amongst them is an old T.A. (Territorial Army) hut from WW2 that when vacated was used as the first Croxley Green Youth Centre. The village raised monies to have a new purpose built centre built for the youth of Croxley Green. (This is now the Community Centre)

The photographs below were taken to give a 'snapshot' in time of  Croxley Green and how it fitted in to the surrounding area and especially its separation from Rickmansworth and Watford. By doing this it would hopefully help to keep these two towns apart from Croxley Green. 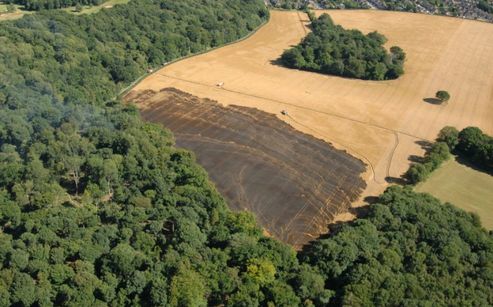 (© Watford Observer) Fire - 19th July 2015
Flames from an arson attack ripped through a Croxley Green farm and caused about £10,000 worth of damage.
Six fire engines and 35 fire fighters were sent to tackle the field fire in Rousebarn Lane just after 3.30pm yesterday.
About a square mile of wheat crops were damaged and witnesses saw two people, believed to be 12-14 years old, setting fire to the wheat.