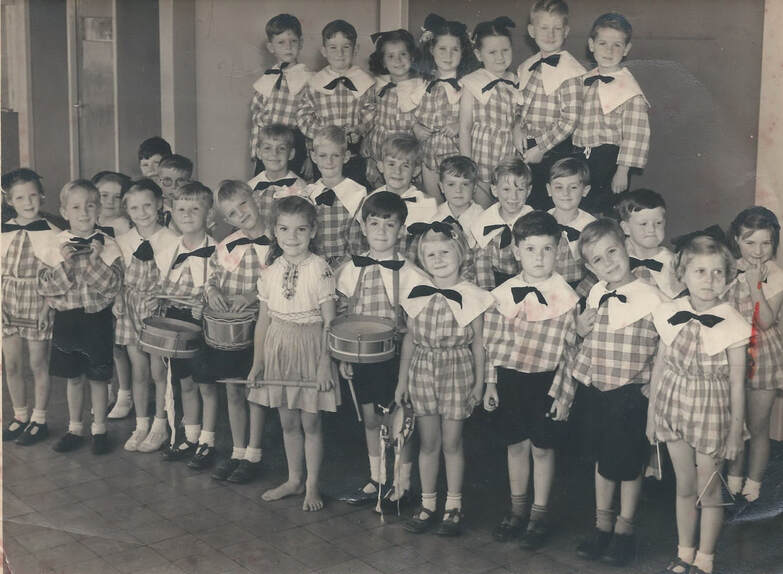 (© loaned by Lyn Dyke (nee Lyn Oliver) Malvern Way Infant School. Lyn (Rosalyn) Oliver is in the back row third on the right. Can you name the year and who is in the photo, what is the event, please? Identified so far , the little girl on the front row, next to the drummer, with fair short hair is Hazel Green, the boy at 3rd in on the right of the middle row is Colin Riddle and the girl standing on the far left at the end of the front row is Elaine Harris. Can you add more names? 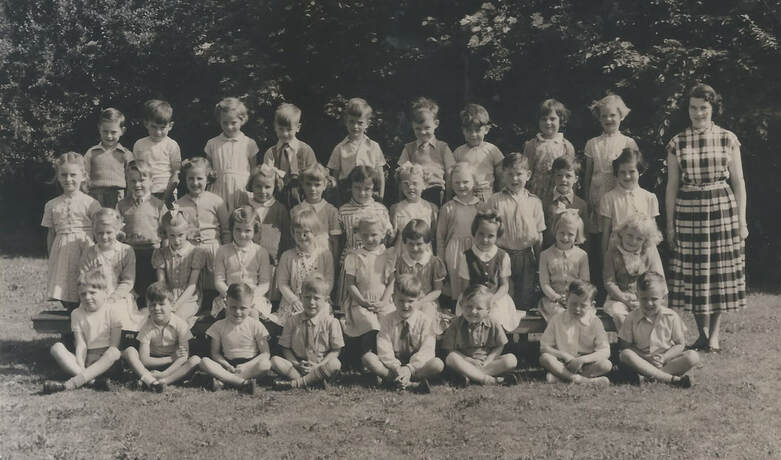 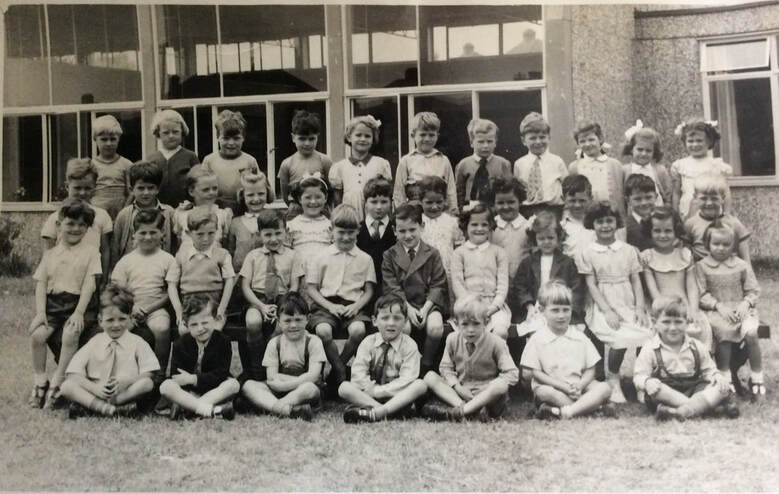 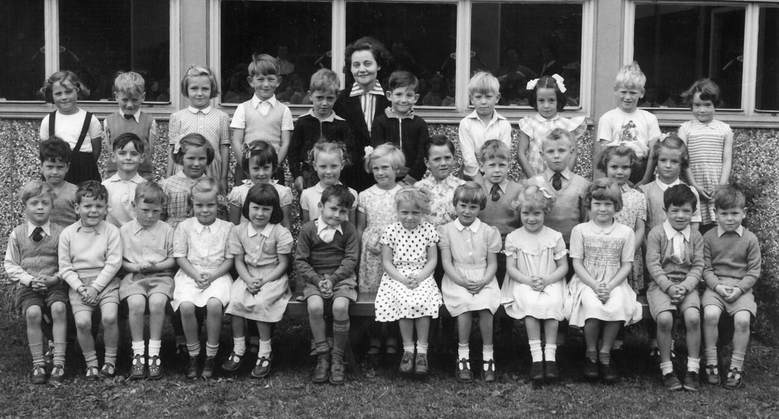 Malvern Way School 1955
Malvern Way Class of 1955
This photograph is unusual as we understand from Brian Ormerod (1st left middle row) that many of these children in this photograph came from Mill End to attend Malvern Way for a short time due to a housing increase in Mill End resulting in a shortage of school places. Were you one of these children? Did you travel by bus? Do you remember how long you attended Malvern Way ?
Back row left to right
1. Trish Bender 2 Graham Davies 3. ?? 4. ??  5. ??  6. ?? Teacher 7. ?? 8. ??  9. ??   10. ??   11. Elaine Childs
Middle row left to right
1. Brian Ormerod  2. ??  3. Jennifer Newton  4. Sandra Pritchard  5. Stephanie (Thompson?)  6. Janet Carvey 7. Phillip ?? 8. Paul Rabbits 9. Peter Puddifoot 10. ??  11. ??
Front row left to right
1. John Owen 2. ?? 3. Derek (Ridley???) 4. Anne Phillips 5. Elaine Parker 6. David Hart 7. Dawn Horwood 8. ?? 9. Marilyn Sole 10. Maureen Godfrey/Wells 11. & 12. The Fraser twins David and Stephen
Memories of the 1955 photograph from Graham Gray;
I have a copy at home somewhere. I think it would have been taken in the Summer Term 1956. I was in this Class but unfortunately I am not on the photo as I believe I was off ill at the time. Looking at the photo I think our teacher's name was Mrs Boulger (spelling?) and I remember her as a very kind and gentle lady. Pupils 2 and 7 in the middle row are Billy King and Phillip Compton, and pupil 1 on the front row is John Woollams (not Owen). I recognise some of the other children (by face and/or name) but I cannot remember how many of them lived in Mill End. Certainly though Phillip Compton, Maureen Godfrey and I lived on the Berry Lane "Council" Estate (built in the early to mid 1950's) which is up the hill from Mill End although I think then was considered as part of Mill End. John Woollams lived on the older Mill End "Council" Estate.

I was born in July 1950 and at that time my parents were living in Winton Drive (just 5 or so minutes walk from Malvern Way School) with my widowed auntie and her three children. There was also a lodger - not unusual in those days. So there were 8 of us living in a semi-detached house. We were on the Council House Waiting List. When my sister was born in January 1954 we climbed the housing list and moved to a brand new 3 bedroom semi-detached Council house on the Berry Lane Estate in March 1954. New houses were still being built on the Estate after we moved there. There were a lot of young families on the Estate and it was a great place for children at that time. We were part of the baby boom of course. It placed a great strain on schools.

I should have started school in September 1955 but there were no spaces in Mill End. Malvern Way school was able to accommodate at least some of us but I think it was the winter of 1955/56 before we could start there. A coach picked us up at the corner of Chiltern Drive and Shepherds Lane and took us to Malvern Way School. In my mind's eye the coach was light blue and had a bonnet - possibly a Bedford similar to the one in the attached photo.

We were at Malvern Way School until the end of the Summer Term 1956 when we were found places at Mill End Infant School. I don't know the full story of the schools in Mill End but the newly built William Penn School freed up space in the Mill End area.

John, Phillip, Maureen and I were together at Malvern Way School, Mill End Infants and Shepherds Junior Schools. In September 1961 Phillip went to William Penn Secondary School and the other three of us went to and Rickmansworth Grammar School. 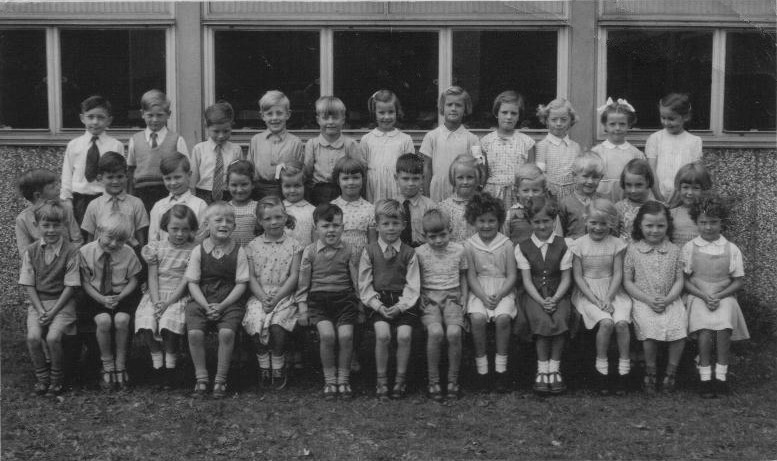 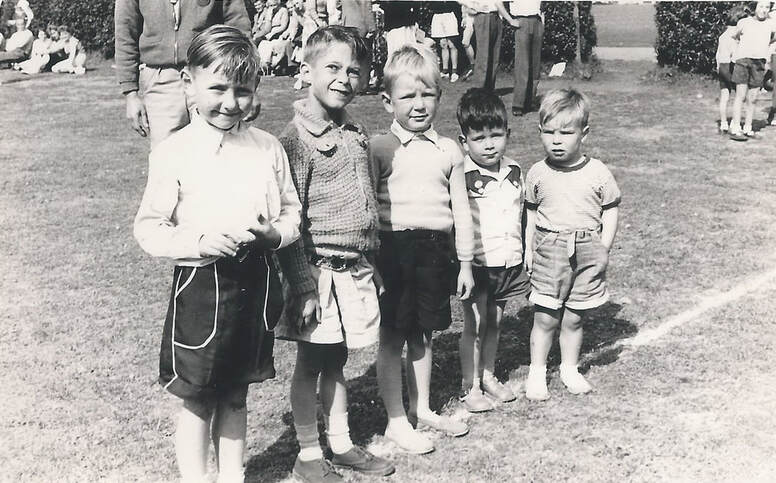 (© Jill Watkins) Malvern Way School 1957
1957 Malvern Way Sports Day Trevor Watkins is in the centre. Do you know the other children. Please contact us if you do. 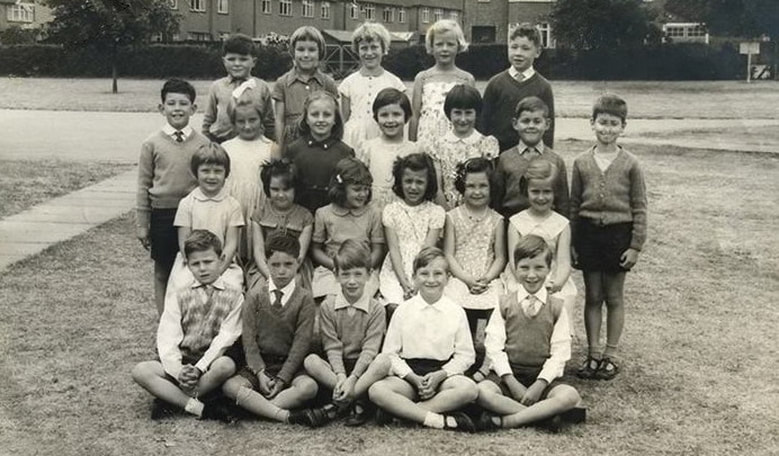 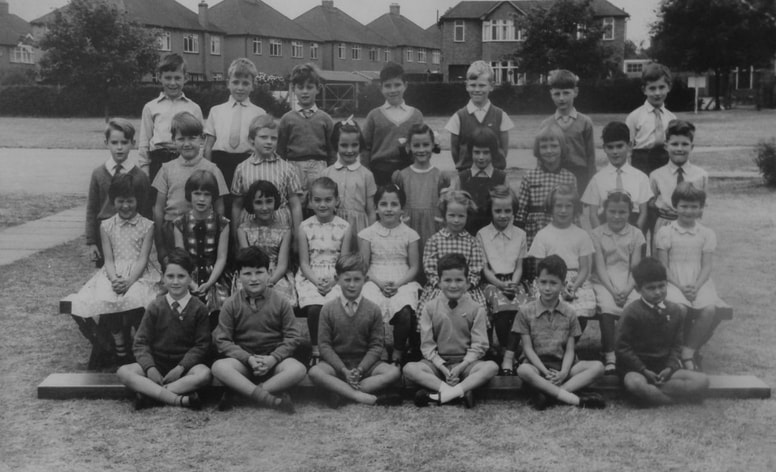 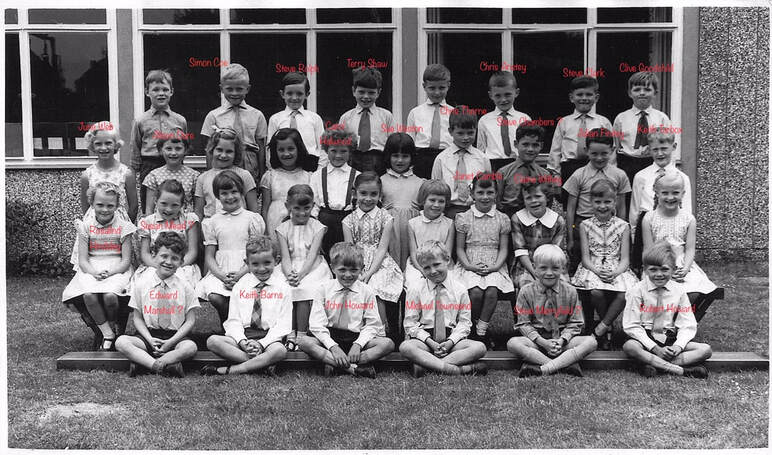 (© loaned by Christopher Anstey) The original entry class of Malvern Way School now in c1962. Please can you help identify the missing names in this image? Were you one of these pupils? If so, please use the Contact page and let us know. 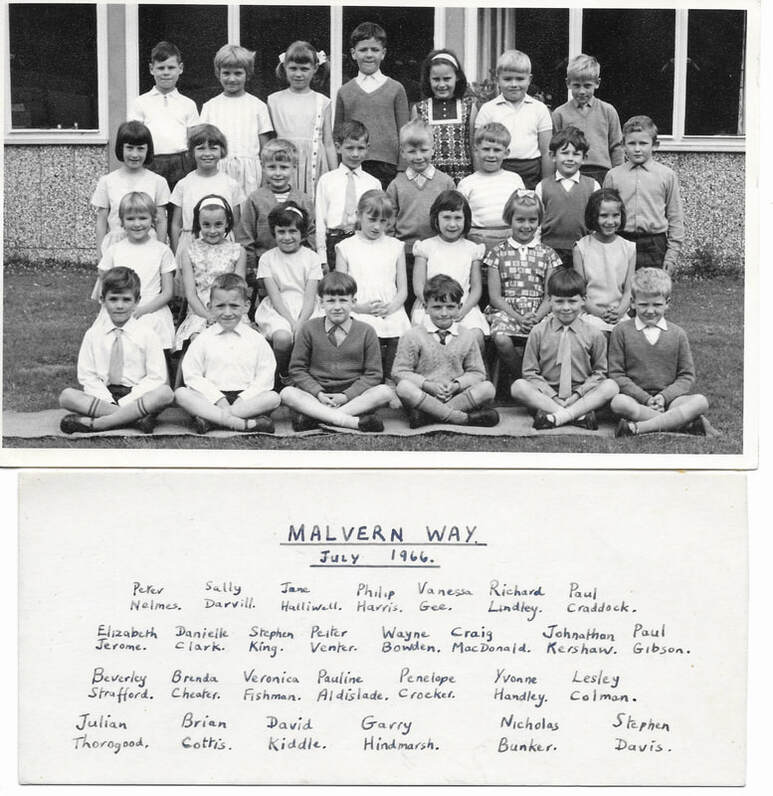 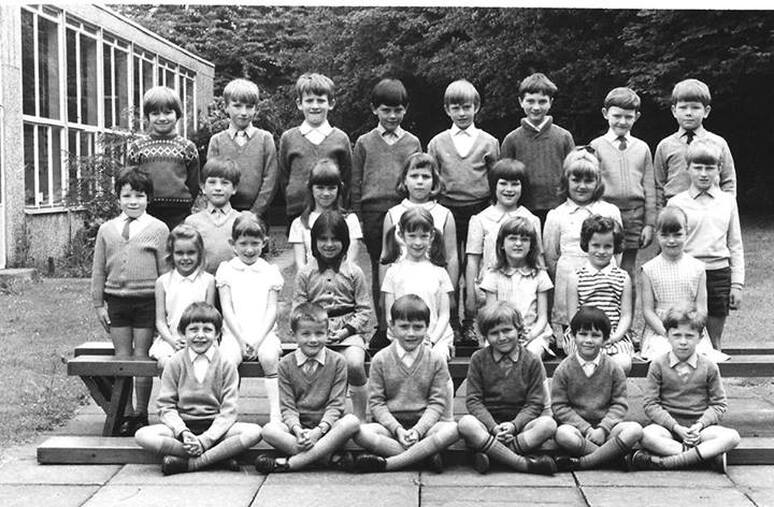 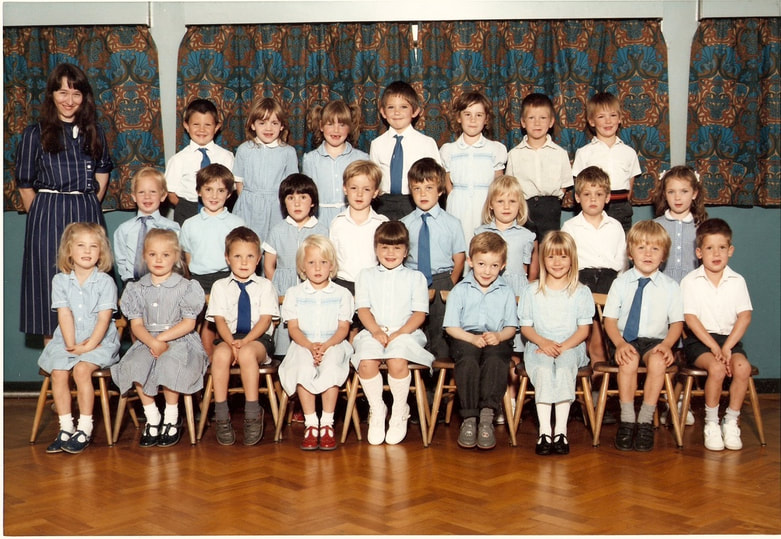 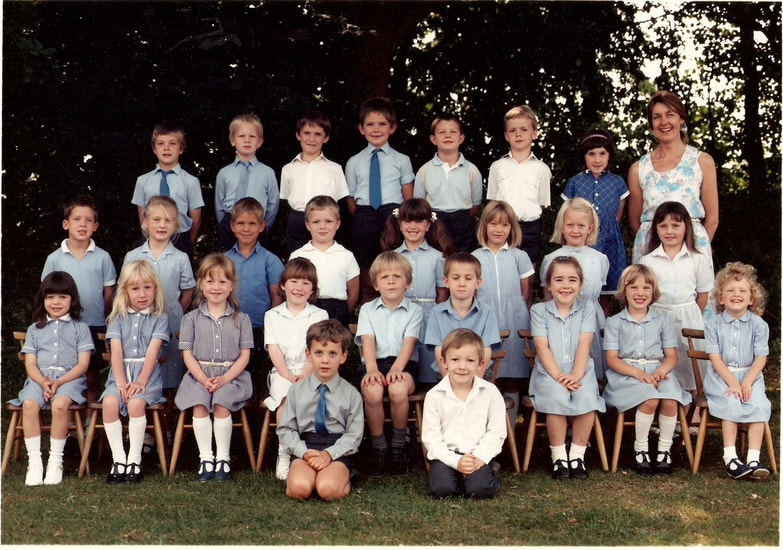 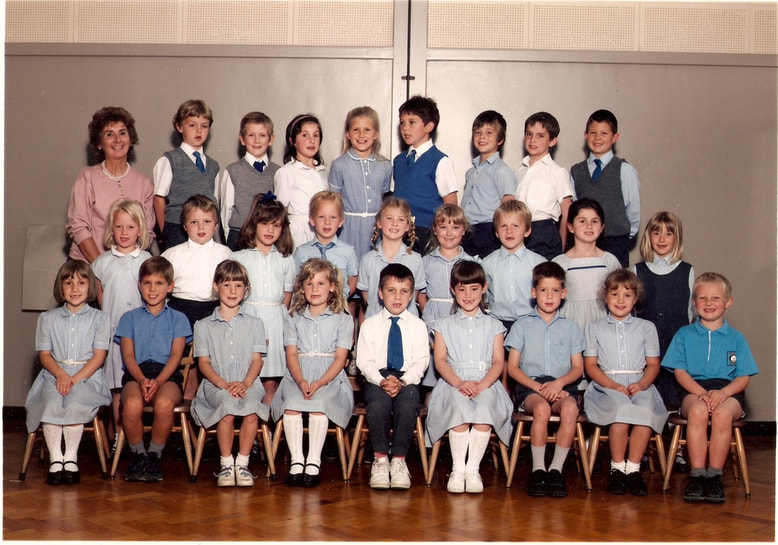