​Horace married Beryl May Chater in 1922. Beryl was born on 16th September 1898 and was the eldest daughter of Walter William and Mary Ann Chater, living in New Road, Croxley Green. Sometime between the 1901 census and the 1911 census the Chater family moved to 52 Dickinson Square, Croxley Green. Walter and Mary now had three daughters, Beryl May 12 years, Eileen Edna 5 years and Vera Mildred 1 year.

The cottages in the Square were built to provide homes for residents who worked at the local John Dickinson paper mill. Beryl’s father, Walter, was a Calenderman at the mill supervising a Calendar machine which gives the rolls of paper a high quality finish. The mill could produce many varieties/types of paper, some would onward travel to the other John Dickinson mills including Apsley for the final stages to complete the product.

Horace and Beryl had been married for five years when their daughter Jean was born on 21st November 1927. Jean would become Glenn’s mother. Sometime prior to WW2 Horace and Beryl moved to 6 Scots Hill, Croxley Green and ran a Greengrocer and Fruiterer business at that address as the 1939 Register shows. The Register was taken to record the U.K. residents and enable the Government to issue Identity Cards to everyone for wartime purposes.

During a bombing incident on 19th February 1944, a parachute mine landed in an outhouse at the top of Scots Hill. Horace’s shop was one of those damaged and was just to the right of G.W. Hunt’s shop in the accompanying photograph. 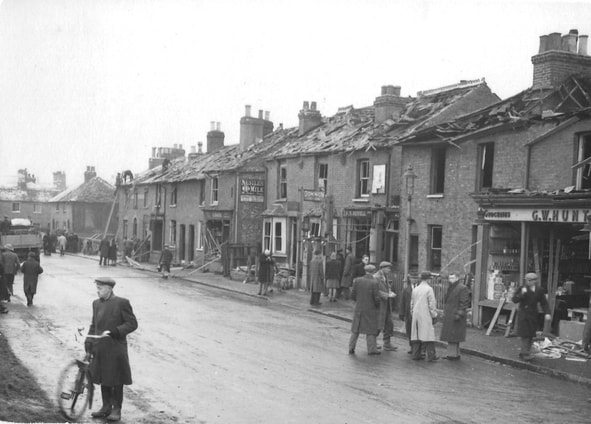 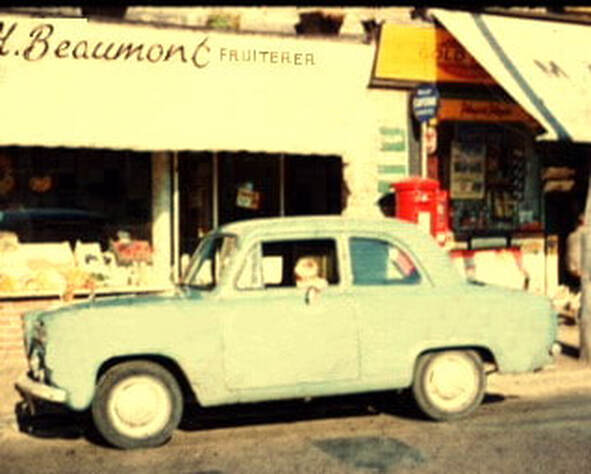 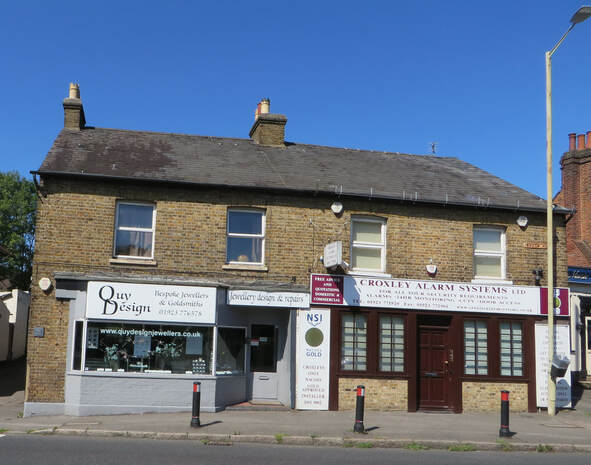 The site of Horace and Beryl's shop now Quy Designs (2020)
Glenn’s father, Robert T Kinnear, was born in Glen Cove, Nassau County, New York State.  He joined the USA army in 1945 aged 18 and was sent abroad to Erding, Bavaria Germany.  Erding had been a Luftwaffe pilot training airfield and was seized by the United States Army in April 1945. Robert transferred to the US Air Force and was part of a crew, flying U.S. heavy bomber B-17 planes, known as Flying Fortresses, which were used extensively during WW2.

Robert came to England from Germany and was based for a while at Daws Hill, High Wycombe.  The land and the house were previously occupied by Wycombe Abbey School and were requisitioned for the Headquarters for the Eighth Air Force Bomber Command (Pinetree).   An underground bunker dug beneath Roundabout Hill (below Daws Hill), and a large encampment of tents and huts constructed within the Abbey parkland of Daws Hill House accommodated staff associated with the Headquarters.

The encampment was sold to the U.K. Ministry of Defence in 1946, and from 1958-1965 became part of the US Strategic Air Command base. Due to its role during the Cold War a peace camp was organised there from 1982 for at least two years. The US Navy used it for US Visiting Forces in the early 2000s, and in 2007 the site passed to the RAF. It has since been redeveloped.

Robert was assigned to a Weather Reconnaissance Squadron and remained with them for the rest of his career.

Following the Japanese attack on Pearl Harbour and the decision of the United States to support the U.K. in Europe during World War 2, the United States had to move large numbers of aircraft to the European and Mediterranean theatres. This had to be achieved via the North Atlantic, with a series of short flights between Newfoundland, Labrador, Greenland, Iceland and the UK. The stormy and erratic weather in the North Atlantic region also presented problems to ships sailing between North America and Britain, and required the same solution: accurate weather forecasting.
The amount of time the route was open could be increased and the losses en route decreased by accurate weather forecasting. Land based weather stations left large gaps; the solution was the development of airborne meteorology. The Weather Reconnaissance Squadron was formed to gather weather data used to provide forecasts for the safe passage of aircraft and shipping. It became operational in April 1943 and operated throughout the North Atlantic region.
There were several RAF bases in and around Croxley Green that were now used by the  8th  US Air Force. Their proximity to Bentley Priory, Stanmore,  Headquarters Fighter Command, and  to RAF Uxbridge, where The Bunker  played a major part in the Battle of Britain and later in the D Day Landings, would have been a key reason . Other bases, RAF Bovingdon and RAF Bushey Hall, were also used by the US Air Force.

Robert continued to be stationed in the U.K. and Glenn is not sure how his father Robert came to meet his mother Jean Beaumont, a Croxley Green girl, but local girls were invariably invited to the dances at the US Air Force camps.  The arrival of American servicemen brought with them a new and exciting form of dancing including the Jitterbug or Swing dancing which were types of Jive and Lindy Hop.
Glenn believes his mother and father met in 1945.

Jean and Robert were married in 1948 at All Saints church. Clothing was still rationed  and new bridal gowns scarce. These special dresses for brides were often home made with whatever white material was available. A material that was often used in the years following the end of the war was parachute silk. As Robert was in the Air Force and there was a local parachute manufacturing company, Martin-Baker, at Denham,  these sources might well have provided the material that was used for Jean’s wedding dress, which was indeed made from parachute silk.
Robert and Jean lived at 6 Scots Hill for many years in the 1950s and 1960s with Horace and Beryl. Glenn was born in 1951,  and a brother Gene 1955. Glenn remembers they also stayed in a cottage on a turkey farm at Bucks Hill. When he was old enough Glenn would help his grandfather deliver the groceries and would occasionally leave with him as early as 3 am on Thursday mornings in Horace’s canvas covered green lorry, to go to Covent Garden to buy supplies.
(Does anyone remember seeing the lorry?)
It was while Robert was serving at USAF Alconbury that he was required to return with his family to the USA in 1955 and was assigned to the Suffolk Air Force base in New York State. Glenn’s younger sister Deborah was born in 1960. That same year they returned to the U.K. and Robert was assigned to the US Air Force base at Bovingdon.
The family continued to travel back and forth to the United States and Robert continued his service at many U.K. bases including South Ruislip, Alconbury, and East Ruislip.
Robert and his family finally returned to the United States in June 1969 where he retired as a Staff Sergeant. At a WW2 exhibition held at Westbury Gardens, an historic house museum near their home, Jean’s unusual wedding dress was part of the exhibition.
Glenn’s grandfather Horace died in 1966 and Beryl in 1980. Both are buried in the Chorleywood Road Cemetery.
Robert passed away in 1999 and Jean in 2017