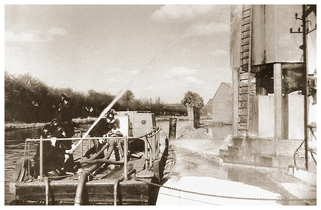 c1954 The mill had its own fire float and fire fighter service
Fire fighters at the mill became a very important department due to the increasing amount of paper production and the growing size of the site. Dickinson’s first official private fire brigade was established at Nash Mill in 1883 founded by Lewis Evans, grandson of John Dickinson. There was however fire fighting equipment prior to this at all the mills.

Initially, a basic fire fighting crew was established and as the equipment to tackle any impending disasters improved so the mill took advantage of upgrading their appliances.

Several serious fires were recorded at Croxley Mill. In 1883 A Merryweather manual engine was purchased after one such outbreak. Another incident documented in May 1924 put the entire local mill brigades to the test when the offices and stationery department were completely gutted.

A fire was discovered in the main offices at around 9pm. The mill’s own brigade was soon mobilised to save the building but the task was too much as there was a strong breeze that night fanning the flames. Such was the intensity brigades arrived soon after 10pm from other mills as well as fire crews from Bushey, Berkhamsted, Chesham, Hemel Hempstead, Kodak (Harrow) Rickmansworth, Watford and St. Albans. In total at least 10 Brigades and 150 fire fighters tried in vain to save the buildings even though water was freely available from the canal and the River Gade. The damage to the main offices and stationery department ran into thousands of pounds.

Safety was always uppermost with the mill managers and notices were constantly placed around the mill as a reminder to the staff of the vulnerability of the environment that they worked in.