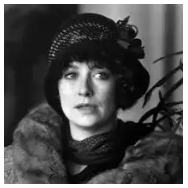 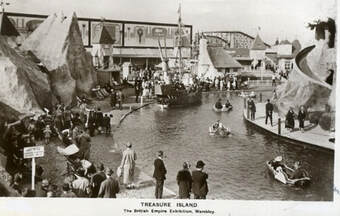 The Treasure Island British Empire Exhibition 1925 Nancy and Agatha organised
​Nancy Neele was the daughter of Charles Woodward Neele (1866-1936) and his wife  Mabel Lillie Fraser(1871-1960).  Charles and Mabel were born in Hampstead London and their marriage also took place in Hampstead in 1894. Their first two children were baptised in Belsize Park London, George Brian 1895, Nancy 1900. However their home address was given as Stockport and according to the time of the 1901 census this also showed Stockport, Cheshire as their home address.

Nancy’s father was an Electrical Engineer with the Great Central Railway. Across the country the railway networks were expanding with many of the smaller independent railways amalgamating. This was the case with The Great Central Railway, which had been formed from several smaller railways from Manchester across the Midlands to Grimsby. The main purpose for this merger was to improve the movement of coal and goods across the Pennine moorland. The eventual intention was to connect up with the London and North Western Railway (LNWR) into London.  This necessitated creating Watford Junction to be a mainline station en route into Euston. Later a branch line was built from the Watford Junction to Croxley Green through the Cassiobridge area in 1912.

It may well have been a coincidence that Nancy’s grandfather George Potter Neele, also worked for the LNWR and at the age of 35 years old had progressed to Superintendent. During his career he had been responsible for Queen Victoria’s private railway journeys and would accompany her and travel on the same Royal trains.  Now retired and an 85 years old widower, he lived at The Lawn, Clarendon Road, Watford as the 1911 census shows. This was once a prosperous road with large private houses close by to Watford Junction, but has since been redeveloped with high rise offices.

This expansion to the railways may have been the reason Charles and Mabel moved the family south to live in Croxley Green. The 1911 census now shows that their family home was ‘Rheola’, Copthorne Road, Croxley Green. The children were George Brian 15 years, Nancy 11 years, Mollie Audrey 7 years,  Anthony Woodward 2 years and Charles Kingston 2 years.

George was attending Aldenham School whilst Nancy and Mollie possibly went to the girls school in Yorke Road. After Nancy left school, she completed a course at the Triangle Secretarial College in London and obtained a position as a clerk in the Imperial Continental Gas Association.

After World War One the British Government decided to promote the United Kingdom to stimulate trade, strengthen bonds between the existing countries connected to the Empire with a world tour, followed by a Grand Exhibition planned at Wembley Park. This site was already laid out with pleasure grounds built around the turn of the century.  It had also meant to include a huge tower planned by Edward Watkins as a replica to the French Eiffel Tower but due to many problems with the structure this project failed.

Major Ernest Belcher was appointed to lead this exciting world tour, starting in 1922 which lasted ten months. The aim was to encourage participation in the Exhibition. Colonel Archibald Christie was appointed financial advisor and his wife Agatha Christie, a popular crime writer, were among those invited onto the committee. Nancy Neele, a friend of Major Ernest Belcher, was also invited.  A Children's Paradise section with Treasure Island as its centrepiece was proposed and the committee on which both Agatha and Nancy sat were asked to design and organise this. The British Empire Exhibition took place between 23rd April 1924 and 31st October 1925.

It was during this time that Colonel Archibald Christie became better acquainted with Nancy Neele  who eventually became his mistress. This caused a rift between Agatha and Archibald and he wanted their marriage to end. Having just recently had news of her mother’s death Agatha was so distraught with Archibald’s conduct  that she ‘disappeared’ for approximately eleven days under unusual circumstances. She was finally discovered living in an hotel in Harrogate registered under an assumed name coincidently of Mrs Theresa Neele.

Agatha divorced Archibald in 1928 and he married Nancy soon after. They had one child and eventually lived quietly in Surrey. Nancy died in 1958 and Archibald in 1962.  Agatha Christie went on the marry Max Mallowan, a British archaeologist specialising in ancient Middle Eastern history. 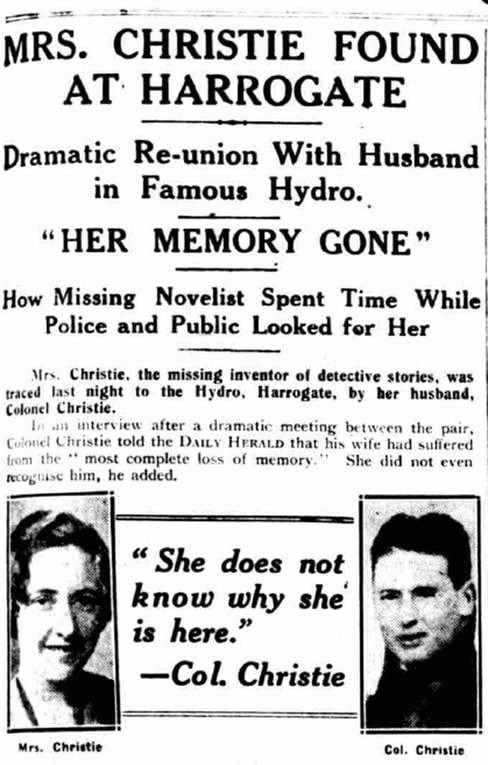