Milson Watkins: D O B 16/03/1921   Gladys Watkins nee Hunt DOB 28/04/1921
​
My parents Milson Watkins and Gladys Hunt were born in Bethnal Green in 1921. He met my mother Gladys, at the age of nine years old; she lived in the same street.
Milson left school at the age of 14 years and worked as a courier for Lloyds of London. He travelled all around the city of London streets, on a pair of roller skates. Gladys worked at home with her mother and sister as a machinist Milson Watkins joined the Territorial Army when he was 17 years old and was therefore one of the first to join the forces at the age of 18 yrs. He was a member of the 12th Light anti aircraft regiment and in charge of a Bofors gun. He quickly rose through the ranks to become one of the youngest Sergeants in the army.  He travelled to many countries as part of the Eighth army. He was one of the first on the beach with his gun, in the infamous Sicilian landings and fought northwards to central Italy to capture Florence. He was mentioned in dispatches by King George V1 for gallantry.
My mother Gladys also joined the forces. She was in the RAF based mostly at Chicksands RAF base, as a teleprinter operator, where she was responsible for passing on codes to Bletchley Park.  On being demobbed in 1945, she lived with her family, who had moved from the East end of London because of the bombing and settled at 3, Claremont Crescent Croxley Green.
Milson did not see his childhood sweetheart Gladys for 4 years. He returned home in 1945 having been awarded many medals and married my mother within a few months in September 1945. 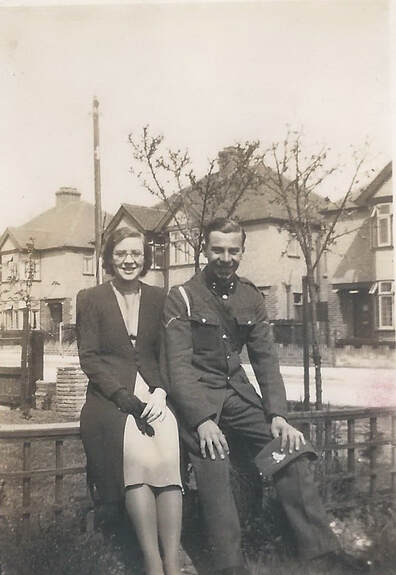 (© Loaned Jill Butler) 1945 Gladys and Milson
​Milson remembers being on leave on VE Day. He went from Croxley to Trafalgar Square in full uniform, with family members to celebrate. They were singing, dancing and watching the fireworks when a rocket hit his sister in law in the face, very close to her eye. Milson carried her to Charing Cross hospital and spent most of the day waiting for her to be treated. She carried that scar on her face till the day she died.
After marrying, Gladys, they rented a flat above the hairdressers on the corner of New Road owned by Joyce and David Samuels (now the library). My father returned to the City of London to find work as a marine insurance agent. My mother worked in the Co-op in New Road.

In 1949 they were expecting their first child and were lucky enough to acquire one of the newly built prefabs at the top of Baldwins Lane. 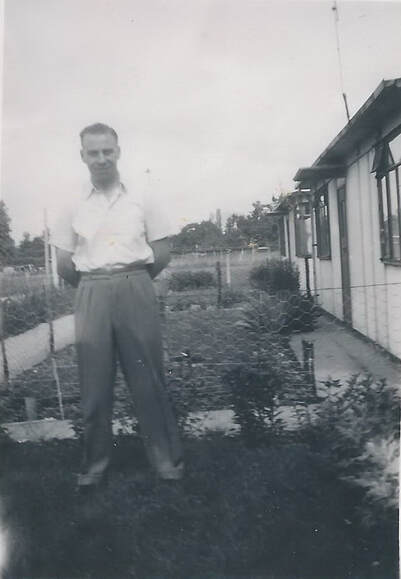