Sections of this full image will appear over the following pages.

So, why New Road?
Well, the answer is very simple. This is where the recent history of Croxley Green really began. There are many far more ancient buildings around – local farmhouses, estate houses and, of course, many older dwelling houses on the Green itself, but it is from New Road that modern Croxley Green developed and grew, and it was New Road that became, initially, the main shopping and cultural centre of the modern residential town that Croxley Green has now become.
This area was, I believe, one of the two original manors of Croxley – Croxley Manor and Croxley Moor Manor – and was, probably, owned by St. Albans Abbey until it was taken over by the crown in the dissolution in 1539. In the mid 1550s Croxley Manor was purchased by John Keys, a very wealthy physician. He presented it to his old Cambridge college – Gonville Hall – so that they could use the income either for bursaries or running costs. Whether it was at his insistence or as a mark of gratitude from the college I do not know, but the name of the college was changed to include his surname but, as is confirmed on their website, the spelling of his name was “latinised”  to make it seem less common, and it became Gonville and Caius College (the pronunciation still being “keys”). It is also suggested that, some time later, John Keys changed the spelling of his own surname to match! There are other versions of this story which say that he changed the spelling of his name beforehand but, either way, this is why so much of the local land is, even today, owned by the distant college in Cambridge.
In the late 1680s, 35 acres was sold to allow Hollow Tree Farm to be created and built. According to the local amateur historian Godfrey Cornwall, writing in the journal of the Rickmansworth Historical Society in 1971, the farm occupied the area between the Watford Road and the footpath along the rear of the current properties in New Road. The old farmhouse still remains, although it is now called Hollow Tree House, and is the first building on The Green south of New Road.
In 1829, John Dickinson bought the land to build Croxley Mill to add to existing operation at Hemel Hempstead and Apsley Mills but it remained fairly small until Croxley Mill began to expand extensively from about 1860. Suddenly more workers were required and, in turn, more homes were needed to house them.
Round about 1860, possibly because of the demand for development land, the farm sold the majority of its acreage to the British Land Company Ltd., and Croxley Green New Road (later to become just New Road) and Garden Road (later to become Yorke Road) were built.
A short article in the Rickmansworth Historian (Issue No 21, Spring 1971 pages 517 to 519) entitled “Hollow Tree House, Croxley Green” by Godfrey Cornwall states:-
“The estate was bounded on its western side by the old turnpike road now known as Watford Road and on its eastern side by the footpath that runs to the rear of New Road. The farm was mainly arable having 30 acres under plough, three acres of meadow and a little over one acre of woodland, the remainder of the land being occupied by the farmhouse, yard, a cottage and garden.
“A private roadway ran through the property giving access to the field known as Milestone Field (so called because a milestone of the Reading Hatfield Turnpike Trust stating one mile to Rickmansworth stood alongside its fence with the Watford Road). This field was owned by the Trustees of Salter’s Brewery and was fifteen acres in extent; it had once been part of Hollow Tree Farm but was sold to Messrs Salters.”
The article goes on to say the owners had, in February 1860, made an agreement for the sale of the land to the British Land Company Ltd and plots were offered for sale at The Swan Inn in March 1865 at £20 per plot. A condition was placed on them that any houses built on the land should not be below a nett cost of £150 in labour and materials.
The British Land Co Ltd was a subsidiary of the National Land Society which was constituted in 1849.
By 1887, Croxley Mill had expanded to cover 16 acres and John Dickinson purchased Milestone Field to build even more houses for his workers in what later became known as Mill Square and then Dickinson Square, but more of this later.
In 1898 the road name was changed from “Croxley Green New Road” to “New Road” and it has remained so ever since. The first shops are said to have been built in the late 1890s and early 1900s.
One of our difficulties has been that street numbering was not generally introduced until the very late 1800s or early 1900s and then it was mainly used in towns and cities. In this area it doesn’t appear in the local street directories until 1902, which initially made it a little difficult to pinpoint some of the locations mentioned in early Census Records or Directories. More about this later.
The extract of the old Ordnance Survey map below shows roughly the position in 1871. I say “roughly” because, although the standard of surveying and plotting was extremely accurate by this time, these details then had to be engraved on to plates and printed. Also the information included relied upon the O.S. being told of the existence of changes or additions, so, although anything shown as existing can generally be accepted, the converse is not always true – i.e. it cannot necessarily be assumed that because something is not shown that it wasn’t there. 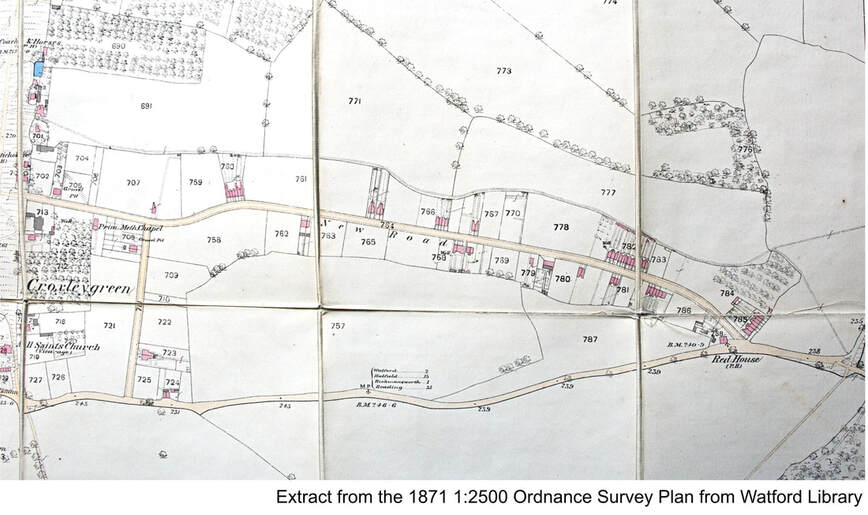 © Crown Copyright
There is at least one instance where we spotted a building which had not yet “arrived” on the plan although we knew it to have been in existence at the time.
This is The Hawthorns, which I will talk about later, which is situated on the north side about half way between The Green and what is now Yorke Road and is reputed to have been built in 1863.
In spite of a few possible slight inaccuracies it is still an invaluable dating tool and gives a very good impression of the beginnings of development along this road.
It is interesting to look at and compare the lines of the footpath to the north, and the main Watford Road to the south with the line of New Road. The footpath is a bit “windy”, probably having originated by following field boundaries, avoiding wet areas, ponds, trees, and other obstacles. The main road is somewhat similar with very uneven boundaries – probably also having started life as a footpath then growing into a horse track, cart track and eventually the Reading/Hatfield Turnpike road, before becoming the wide, metalled main road that it is today.
New Road, in contrast, has obviously been designed with its straight lines and easy curves to maximise the use of a “green field” site, evening up the lengths of the plots of land for sale on each side of the road as much as possible.

Whilst we are looking at the map, there are a few more little points of interest …·       Note the milestone about half way along the length of Watford Road. It was because of this that the adjacent field was known as “Milestone Field” and we will look at this again a little later when we take a quick look at Dickinson Square.

Eighteen years later, the 1898 map shows that development of the road was now well advanced. We can see ……Milestone Field, (later to become Mill Square and then Dickinson Square) has been built; 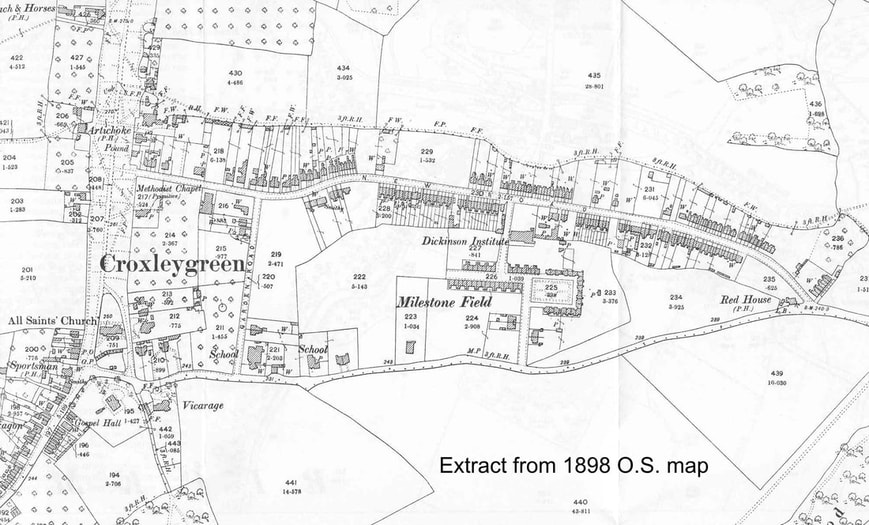 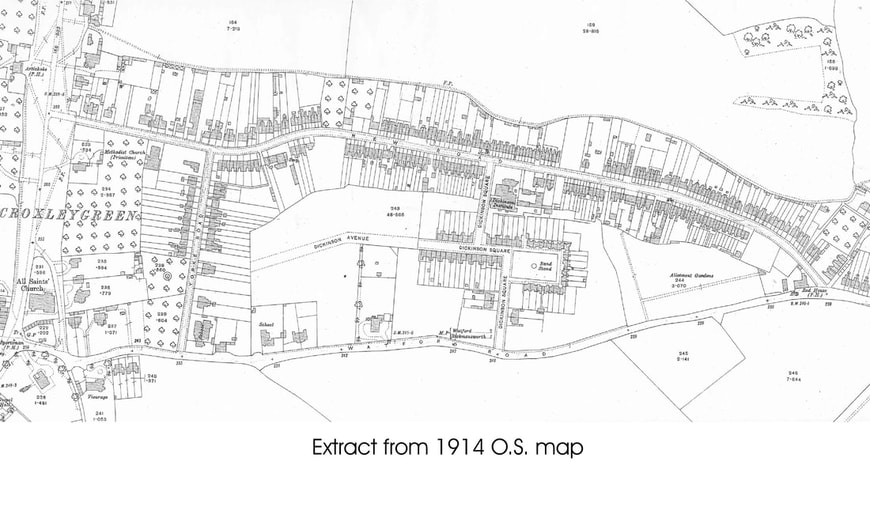 © Crown Copyright
​…. and over the one hundred intervening years there has been a little rebuilding and a few new  roads but little change otherwise. 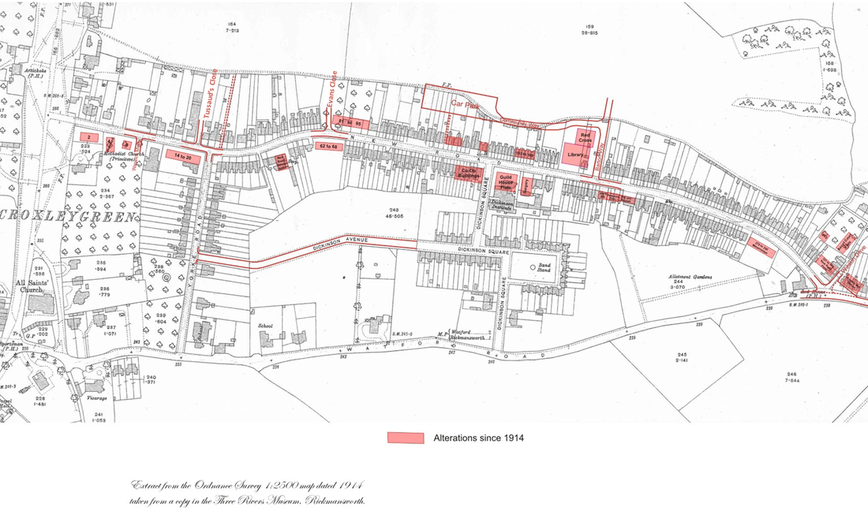 © Crown Copyright
​Now to begin our stroll round …….
Crown Copyright information taken from the Maps on this website has be re-used under the terms of the Open Government Licence (OGL)  The OGL is a free licence developed to enable freer use of government information and public sector information without the need for formal agreements or any registration transaction,  This licence takes the form of a simple set of terms and conditions for re-use and can be viewed HERE
PREVIOUS PAGE  /  NEXT PAGE