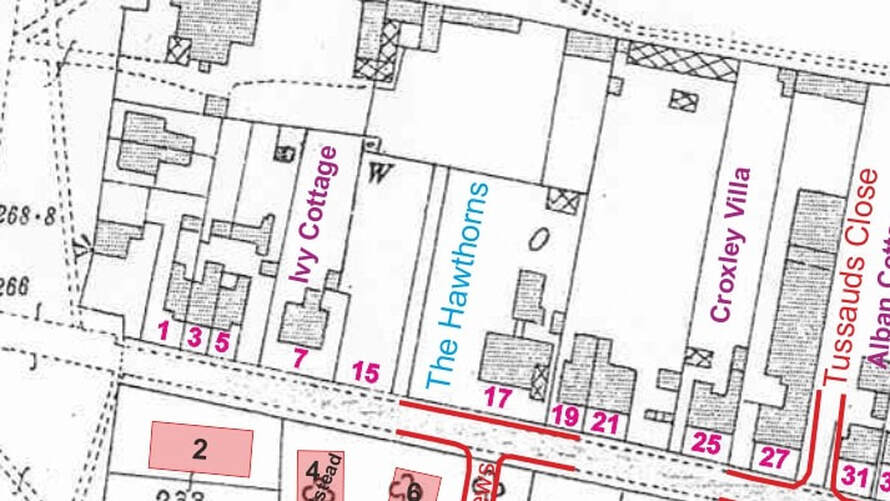 Odd numbers between The Green and Barton Way 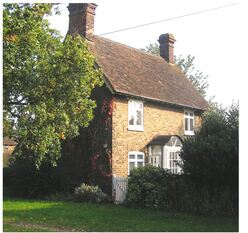 ​Standing on The Green, looking East down New Road towards Watford Road, the odd numbers are on the left side, the same side as the Library.
The very first house, called “South View”, now actually only has access direct from The Green, although it clearly faces New Road and the hedge on this boundary looks as if it might, at some time, have allowed access from New Road.
It has been suggested that this building was the very first Post Office in the area, letters being posted through a slot in the wall, long since bricked up. Its garden also doubled as the village pound – presumably a safe haven for stray animals. 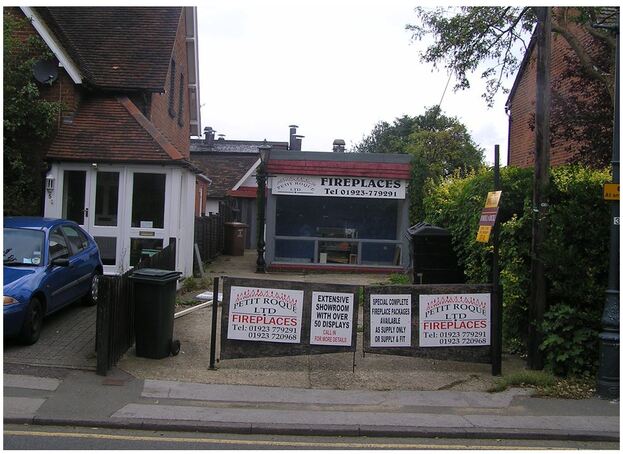 No. 17 is “The Hawthorns”, a large house which is said to have been built in 1863, although it doesn’t appear on the 1880 Ordnance Survey map. Both the 1890 Kelly’s and 1891 census both show the house to be occupied by a Susanna Warwick, who was “living on her own means” with her young servant Alice Chilton.

John Theodore Tussaud, the great-grandson of Madame Tussaud, occupied The Hawthorns from 1902 to 1947 and in the 1930s it was used as a base for the family business run by her great-great-grandchildren, “The Tussaud Brothers”, who organised  “Exhibitions, Tableaux and Scenic Effects”. 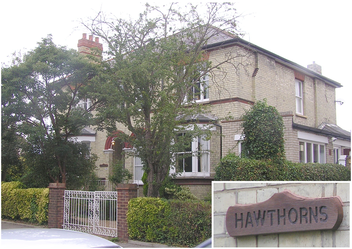 Hawthorns in 2006
Madame Tussaud was born Marie Grosholz in Strasbourg in 1761. Her mother worked for a Dr Phillipe Curtius, who ran an exhibition of waxwork figures and, from a very early age she learnt the art of wax modelling, becoming very proficient at it.
At the outbreak of the French Revolution in 1789 she helped Curtius to model the death masks of the guillotine victims, and in 1794 she inherited the collection of masks from Curtius. In 1795 she married a French engineer, François Tussaud, but left him eight years later to tour Britain with her waxwork exhibition.
In 1835 the exhibition settled into its first permanent home in The Bazaar, Baker Street. She died in 1850 and, in 1884, her grandsons moved the exhibition to its present site in Marylebone Road.
Since “The Hawthorns” seems to have been built after her death there can be no substance in the suggestions that she actually lived there at some time.
In the 1891 census, No. 25 was occupied by George Ricketts, a Tortoiseshell worker. By 1913, 1920 and again in 1930 it was listed as occupied by Dr Richard Evans, although it is not clear whether this was his private house or his surgery or, as was often the case in those days, both. 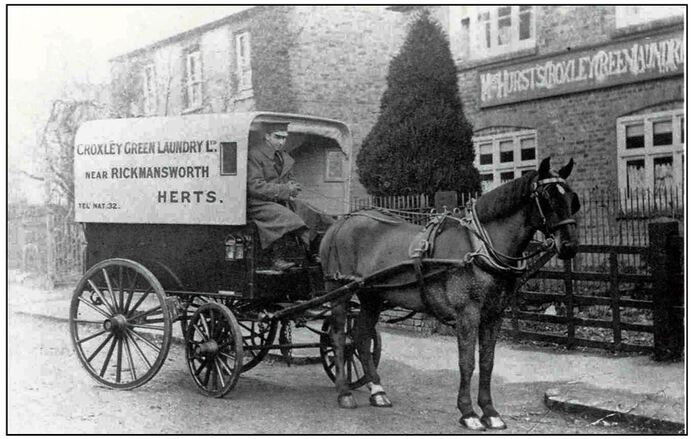 Mrs Hurst’s Croxley Green Laundry c1900
From 1890 (and possibly before) until at least 1901, No. 27 was listed in the Local Directories and the 1891 census as occupied by Henry Revell, firstly as a bricklayer and later as a builder. As mentioned earlier, this surname crops up a lot within this small area so it would seem likely that the family had lived close by for some time.
By 1904, however, “Mrs Hurst’s Croxley Green Laundry” was then resident and this certainly continued through to 1930 and possibly later. At some time around 1935 it relocated to the foot of Scots Hill in Rickmansworth.
PREVIOUS PAGE  /  NEXT PAGE