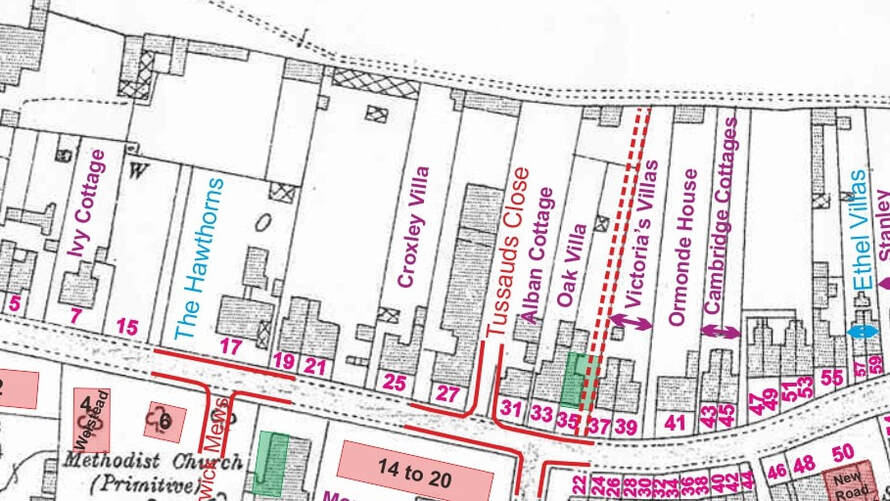 Map Data: Purple - Early Cottage Names / Blue - Current Cottage Names / Green - Buildings on 1880 OS Map / Pink - Buildings since 1914 OS Map
The 1940 Kelly’s shows No. 27 as occupied by “George R Francis, Electrical Engineer”, although it is not clear whether this was a private house or a shop; probably the former.
In the modern day picture it looks as if the laundry has been rebuilt although the house next door still looks very similar to the one in the older photograph.
On reflection, however, a glance at the chimney stack indicates that it is probably much older and I now suspect that, although it has had a complete make-over, with new roof, windows and new rendering to the exterior walls, it could well still be the original building.
I have now had confirmation from a local resident who remembers work being done on the windows on a number of occasions and is certain that this is the original building shell.
The photograph nearby showing old and new together gives the opportunity for closer comparison and, whilst the laundry building itself is obviously hugely altered, the building next door is virtually unchanged.

No. 27a is shown in both the 1940 and the 1968 Kelly’s Directory as being occupied by Thomas Rixon, Builders and, an internet trawl in 2006 gave the address as occupied by “J & J Insulations Ltd, licensed asbestos removers”. Another similar advert gave their address as No. 1 New Road and it is not clear whether both properties were owned by the same business or it relocated.
Next to No. 27, on the plot which presumably would have been numbered No. 29 had it ever been built upon, is “Tussauds Close”, which was constructed round about 2000.
Continuing past the close we come to No. 31, rebuilt, possibly, in conjunction with the building of Tussauds Close in 2000 (I don’t have this information).
The 1910/11 Kelly’s directory indicates that it was occupied by Susannah Batchelor, a Baker and in the 1930 Kelly’s by Albert George Wilson Batchelor, a Tailor. By 1935 he was advertising his trade from No 222 as we shall see later on. The above advert from a 1933 All Saints’ magazine, however, confirms that he was, at that time, operating from No. 31.
The original building on this site was, we believe, called “Alban Cottage”.
No. 33 was shown in the 1920/11 Kelly’s as being occupied by Miss Elizabeth Young, a Draper and in the 1940 Kelly’s as being “Oak House Preparatory School”, with Mrs Mackay the Principal.
Today, this and the house next door, which is now numbered 31a, are private houses, but I suspect in 1940 that they were a single unit which has since been split.
It is interesting to note that our placing of the 1891 census gives this building the name of “Oak Villa” – surely not a coincidence in the naming of the school as “Oak House”!
Looking at it today, with its square, rather austere frontage, it is not difficult to imagine it as a small private school ! 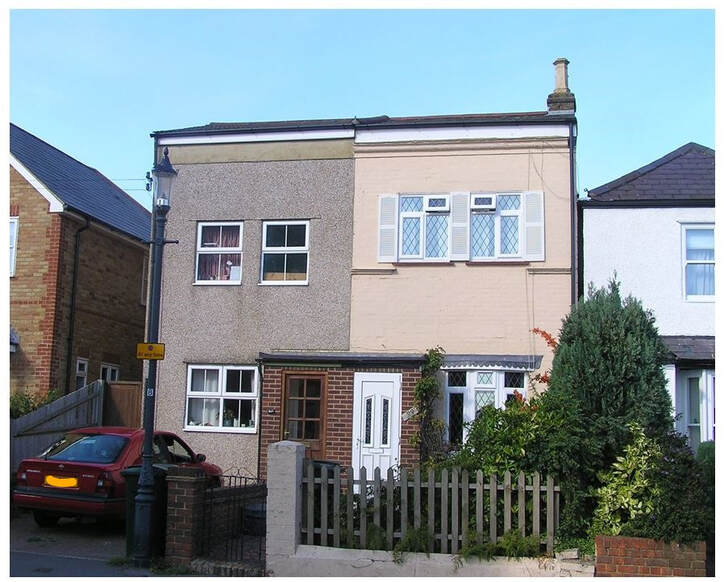 ​No. 35 is one of the few houses along this length which is shown to be in existence on the Ordnance Survey Map of 1871, and it is standing in quite a large expanse of ground.
Each of the 1940, 1968 and 1974 directories gives the occupier as “The House of Dickinson Guild of Sports” with a description as just “Grounds” so it may have been some sort of clubhouse or groundsman’s house.
The 1896 map shows this area as having been built upon so, I suspect, if it ever was a playing field or recreational area that was here, it was moved round the corner to the present ex-Dickinson Sports Ground. Some early Dickinson’s documents refer to “The Cricket Field”. The first sports ground was on land opposite where the station now stands but it was moved to its present location when the land was required for the railway line.
​
There is an entry in the 1891 census for “David Sweeting, Laundryman” and his wife Eliza, a Laundress, which we are certain relates to this building. It could be that the Laundry business began here before moving up to No. 27?
PREVIOUS PAGE  /  NEXT PAGE