Croxley Green Mill was originally a five storey tower mill with a stage at second floor level. The tower has an internal diameter of 22 feet (6.71 m) at ground level. It had a boat shaped cap winded by a fantail. The four Patent sails drove three pairs of millstones. It was built in c1820 according to Historic England's listing.  The tower is built of mixed red and stock brick with a leaded roof with timber parapet.  There are timber steps up to a first floor timber balcony running all the way around. It was converted and extended  for residential use in the1960s.  The glazed entrance was added in the1960s and, to historians, the residential extension is of no special interest. The Windmill itself is a Grade II listed building and the list entry number is: 1100797

The windmill was operated until the sails were blown off in a gale in the 1880s. It was then worked by steam power and was last used to grind wheat in 1899.
After 1900 it became a sawmill and turnery but by the 1930s it was being used as a chicken house and pigeon loft. During the Second World War, the mill was used as an air raid precautions observation post, with an air raid siren mounted on the tower.  After the war it was converted into a residential property and had an extension built on the side in the 1960s. The windmill has 2,055 sq ft of accommodation with a lounge/dining room and greenhouse in the sixties extension on the ground floor.  A workshop or family room occupies the circular part of the mill alongside a kitchen and bathroom in the extension on the first floor. A circular sitting room rests on the second floor and a third bedroom also lies on the top floor of the former mill. it is tucked away in grounds of just under half an acre and can be accessed over a tarmac driveway.

Anonymous memories of the Mill: (c1950)
The present mill was adapted to steam power in Queen Victoria’s reign and corn was still being ground there within living memory.  The miller, Mr. Holloway, also specialised in the making of wooden malting shovels for brewers.

The sails of the windmill no longer show above the housetops, a wild wind one morning in 1890 blew two of the sails away and the miller, who was ill at the time was unable to repair them. The mill had been built at some date between 1841 and 1851, in a field that was part of the holding of Thomas Blackwell of "Smoky Hall". The mill came later into the possession of Ephraim Holloway and it was to this mill that the many gleaners of the corn fields carried their gleaning' to be ground into flour, the miller retaining the "offal" as his payment. The windmill is the end of this wander into the past, it is all past, but the, story of the Green will go on - new buildings replacing the old, new people too as well as new memories, there is room for the past but one has to look forward into the future for that is what living is for.
CROXLEY WINDMILL AND THE HOLLOWAYS – Frank Paddick  (Article for Rickmansworth Historical Society) 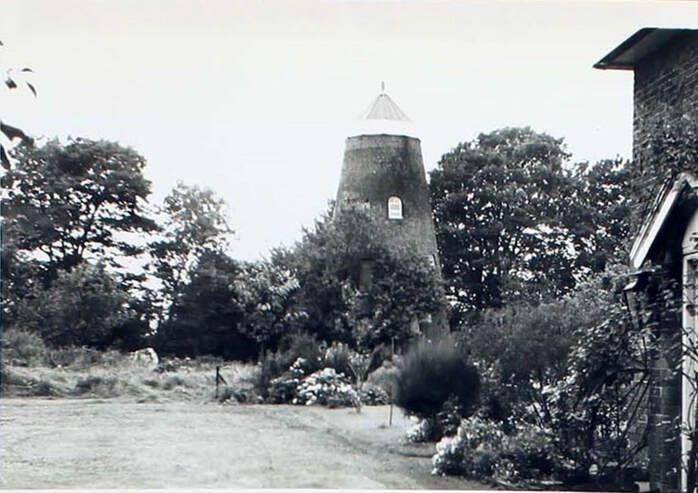 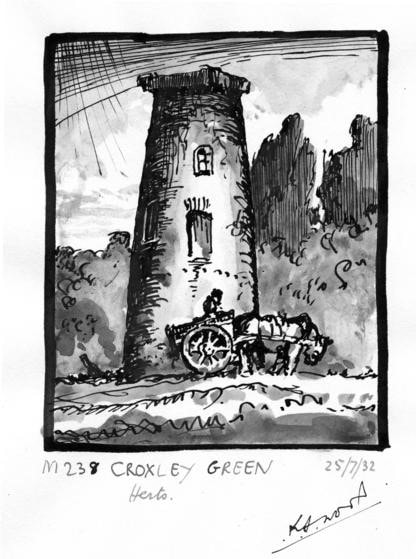 © Karl Salsbury Wood (1888-1958) The Windmill drawn in 1932
Karl Wood (1888-1958) was born in King's Newton, Melbourne, Derbyshire. He later settled in Gainsborough, Lincolnshire where he was art master at Gainsborough grammar school. He had his own art studio and undertook private tuition in several subjects including painting, piano and singing lessons. Painting tuition resulted in sketching bicycle tours into Lincolnshire with his pupils. His first windmill painting was in 1926 and by 1956 he had completed 1394 windmill paintings. It was Karl Wood's intention to publish a book on British windmills to be called The Twilight of the mills, based on his extensive travels by bicycle, but this was never completed. Karl Wood's paintings are now housed in the Usher Art Gallery, Lincoln. 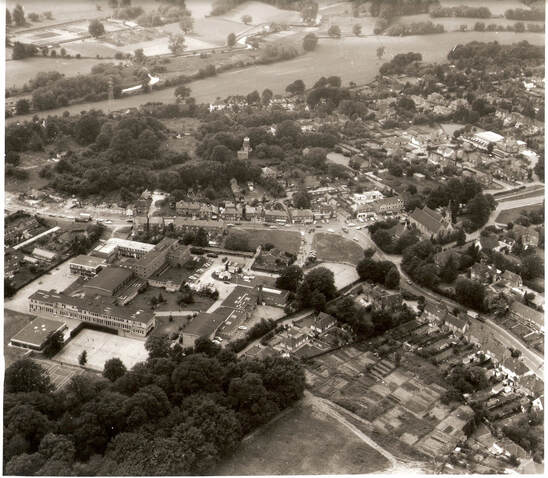