Situated just off The Green and originally just over 12 acres, the orchard was part of Parrotts Farm and leased to George Stone who came from Sarratt in the late 1880's. When George passed away his nephew Walter Stone took over the tenancy. In addition to the orchard area there was a large meadow where dairy cattle were grazed. This would have contributed to the income for Walter and his family as he provided a daily supply of fresh milk for local villagers. The orchard had an extensive variety of fruit trees, and as the village expanded the orchard became very popular with local residents especially when the cherries were available during June and July. Families would make a special day of it to visit the orchard on so-called 'Cherry Sundays' Having bought a good portion of the plump ripe juicy cherries from the stall set up outside the orchard entrance the families would have a 'cherry picnic.' Maybe father would walk across The Green to the Coach and Horses or The Artichoke for some refreshment too! On this side of The Green the cherry orchards, some attached to the public houses, were known mainly grown for the cooking varieties.

During the 'cherry ripe time' it was the custom for an organised group/contractor of 'pickers' to bring their cherry ladders to local orchards to pick the fruit for owners or tenant farmers. The trees were very high and the men would climb into the tops of the trees to gather all the juicy fruit. These special ladders were wide at the bottom, and narrow at the top and were designed just for cherry picking, enabling the men to reach the treetops in safety.

There were a number of buildings then on the Stone's orchard site including a wooden barn and sheds for a small number of horses (for the carts) and pigs. In 1925 the old wooden barn was destroyed by a fire and was replaced with a more substantial brick one. 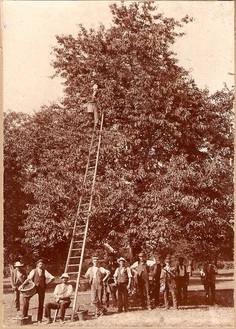 Cherry pickers in the orchard c1915
The hedge that fronted The Green was of cob nut (hazelnut) and in the spring a show of primroses grew underneath. The orchard provided the village with a wide variety of fruit that could be purchased from a stall at the gateway or from Rose Cottage where Walter and his family lived.

Walter and his two sons George and Jesse expanded the business delivering wood (logs) and coal, initially by horse and cart. During the construction of the Metropolitan Railway through Croxley Green, hundreds of tons of spoil required transporting from Croxley Hall Woods cutting to make the viaducts. Much of this was done using Walter’s horses and carts.

Eventually, Walter was able to purchase a lorry as the demand for coal increased with the new housing. When George’s daughter Doris married Bob Woods he purchased a lorry and subsequently took over this side of the business. Doris remembers that when she was a child the orchard site was known as Shepherd's Farm but with the family in place it soon changed to Stone's Orchard.

Many stories have been recounted about incidents attached to the orchard. Early one morning the local policeman was seen coming out of the orchard by Walter who approached him and enquired why he was there. The village bobby’s replied, he was keeping an eye on the property in case of trespassers and anyone stealing the fruit. Walter thanked him and declined to mention the purplish stain around the officer’s mouth.

It has been recorded that during some of the earliest celebrations for royal occasions, the orchard was an ideal place to hold the children’s tea parties.

Walter passed away in 1939 but his sons George and Jesse along with Bob Woods continued to run the business. However, when George and Jesse died, the tenancy was terminated as their daughters Doris and Margaret and their families did not wish to continue and the business came to an end in about 1970. 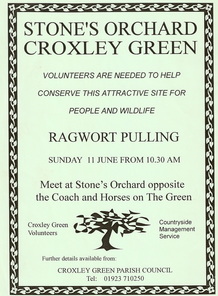 Ragwort was removed 11th June and 3rd July 1994
The land, now owned by John Dickinson Company, had been purchased many years prior to this and several acres, mainly the meadow, was sold to Hertfordshire County Council for a new school – Yorke Mead.

The remainder came under threat from a planning application to build many detached houses and garages on the site. Robust action took place and the planning application was rejected. John Dickinson Company closed the mill down in 1980 and sold the remaining three and half acres of the orchard for just £1 to Three Rivers District Council in 1983.

During the next 10 years, the orchard received no maintenance, resulting in the trees failing and the site becoming severely neglected.

Croxley Green Parish Council became aware of this in the early 1990's and following advice from many supporting environmental agencies and with the approval of TRDC  the orchard was given a new life. This was followed by a start-up management plan prepared by Martin Hicks MIEEM, Senior Ecology Officer, Hertfordshire Biological Records Centre and approved by TRDC and CGPC .

The site was now required the removal of ragwort which had invaded the grassland and preventing the growth of many species. This could only be achieved by volunteers removing it by hand. With the guidance of the Countryside Management Services 2 separate days were set aside for this task in 1994.
It was now evident how important Stone's orchard was within the county, one of the oldest recorded from old maps even before the Stone family had taken on a tenancy. Doris Stone had an interesting collection of family photographs recording times at the orchard and it was agreed to produce a small booklet incorporating some of these as well as its known history at that time. Habitat species had been recorded  and these too were included. 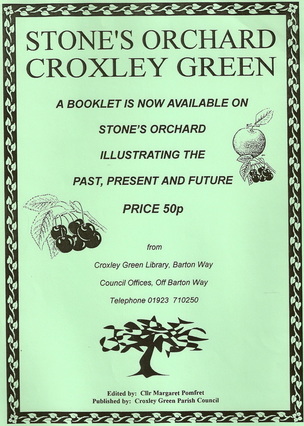 500 copies were produced and sold in 1995-6
It was also decided because the original hazel hedge had grown into trees and in time would topple over it was agreed with the Countryside Management Services and the CGPC ranger coppicing should be done. The inside hedge was completed initially and hazel whips planted to recover the original appearance. The outer hedge was done a few years later.
Following the advice on the management plan where to best plant the new trees, as the site was now reduced, the CGPC purchased trees from a recognised fruit tree specialist who knew of the orchard in its heyday and the known varieties that were stocked. 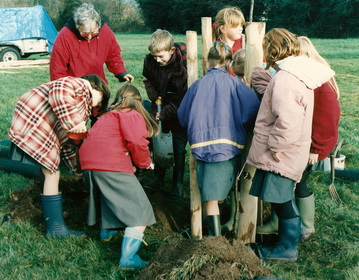 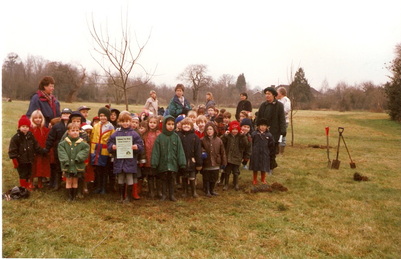 (© loaned by Margaret Pomfret) All done and back to school
November 1997 - Yorke Mead School
During 1995 celebrations were taking placed to honour and remember those who had fought in the Second World War. May 8th 1995 was the 50th anniversary when victory in Europe was declared, now known as V.E. Day. Later that year close to the 50th anniversary of the cessation of war with Japan in August a similar celebration took place.

In the past Croxley Green has recorded national events such as coronations by planting an oak tree on The Green. However, as many residents had fond memories of Stone's Orchard and a restoration program of the remaining land was being implemented the Parish Council decided to go ahead with a request from a resident to plant a walnut tree close by to the entrance, replacing one known to have grown but no longer existed. Over 200 residents gathered on a sunny afternoon to join in a short service to mark the planting of the walnut tree. Father Haines led the service that was also attended by the Royal British Legion, Wing Commander Samuel Hatton, Chairman CGPC Cllr John Hedges and their wives together with the young and old of Croxley Green.
On the 20th August to mark the 50th anniversary of the cessation of the war with Japan another service was held and a seat was unveiled close by. This was performed by Mr. George Newstead President of the local Royal British Legion who received a framed scroll to mark the occasion. The Chairman of Three Rivers District Council, Councillor Alan Littlejohn and his wife and Croxley Green Parish Council Chairman, Councillor John Hedges and his wife led the way to the memorial on The Green.

A short service took place and the laying of a wreath by Mr. George Newstead. All Saints Church was chosen to hold an Ecumenical service conducted by Father Haines and Cllr John Hedges. Norma Stubbington reading an appropriate lesson. This was followed by tea and light refreshments in the church hall. 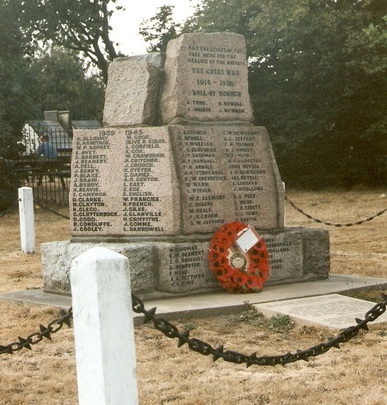 (© loaned by Margaret Pomfret) The Croxley Green war memorial
More trees have been planted over the ensuing years to restore this orchard, with its nostalgic memories for many residents, into a local haven to be enjoyed.

The management plan has since been updated and many surveys of the flora and fauna taken. The CGPC employs two rangers who take a great interest in the management of the site.

Events such Wassailing and a dog show have been established recently as yearly events.