Croxley Hall Farm name sign
In the 16th century the farmland, along with the rest of Croxley Green, belonged to St Albans Abbey which also included a monastery.  King Henry VIII confiscated all these lands when he dissolved the monasteries between 1536 and 1540. During the reign of his daughter Mary, the manor of Croxley Green including Croxley Hall was purchased from the Crown by John Caius who had been a scholar at Gonville Hall, Cambridge. (His name was added later to become Gonville and Caius College).

The original farmhouse built at the end of the16th century has been altered many times, the land  rented from the college had a succession of farmers.  Records show that the Bovingdon family lived here for over 100 years until the early 1800’s

At one time the farm would have been managed with dairy cattle and arable farming. It was the arrival  of William Sansom originally came from Berkshire/ Oxfordshire who changed this.  He came to work on the railway at Watford Junction in the early part of the 1800’s with a friend called Williams. After a short while William Sansom became aware that the area was ideal for growing watercress and in about 1837, with another co-worker named Durrant, moved to Boxmoor to start a business there.

The Sansom family eventually moved closer to Watford and Croxley Green, growing watercress in beds close to the River Gade near Cassiobury Park. They lived for many years in one of a pair of cottages at the junction between the bottom of Baldwins Lane and the Watford Road. 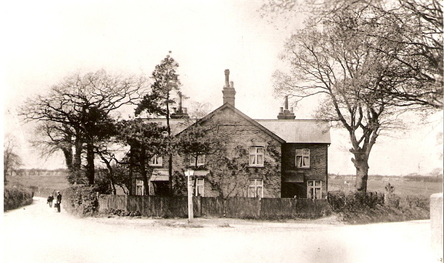 Cottages at junction with Baldwins Lane (right) Watford Road (left)
This location has changed from a T junction to a roundabout. A public house was built called The Two Bridges replacing the Halfway House PH that was demolished when the canal bridge was upgraded.  The Harvester Restaurant now occupies this site and alterations to it have changed the original look.
By 1880 the family had moved into Croxley Hall farm near Common Moor, the canal and River Gade. A Barn several hundred years old adjoins the farm.
By 1924 the watercress business was the family's main concern and the growing of cress was now on a large scale and to a high standard as the local springs provided a good source for watercress cultivation. Many areas of Croxley Green sit on gravel foundations and from around 1900 gravel extraction took place in Croxley Hall Woods and later on the farm land. Once the gravel had been extracted from the surrounding farm, lakes formed and destroyed the pastures. However, over time these lakes have matured and now offer many forms of fishing for the enthusiast including trout and carp.
The expansion of the business  continued into the 1930’s expanding so much that at least eleven family members were employed. They were renowned for dispatching special orders to London for the royal family for use in their dining cars on the royal train to Balmoral.

The railway was essential to the dispatch as watercress,a perishable product, depended on reliable transport. Leaving from Rickmansworth L.M.S. Station by what became known as "The Watercress Express" to destinations all over England and also up to Scotland, the cress was used in the railway dining cars. Markets too were very keen on the sale of this relatively cheap product.

In 1935, as part of The Lord Mayor’s Procession in London, a ‘Pageant of Agriculture and Country Life’ was depicted , the business providing a decorated lorry and trailer. Girls dressed in green on the ‘float’ decorated with watercress threw bunches of cress into the crowds. Two ‘watercress beds’ were laid out on the trailer and an 'Artesian well' activated by a hand pump followed behind. 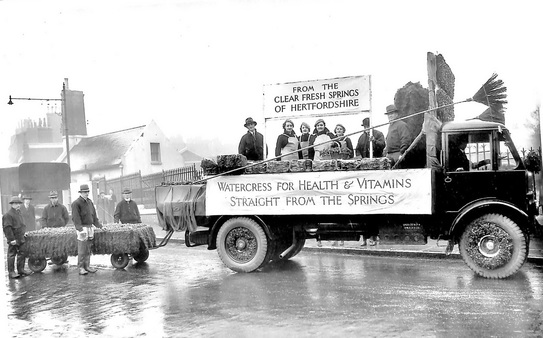 Leaving for the Lord Mayor Show
One particular family member, Charles H Sansom, was at one time Chairman of the National Watercress Growers Association, a subsidiary of the National Farmers Union.

During the Second World War watercress was considered a valuable food when so many other commodities were rationed. A bunch of watercress, freshly picked and tied with string and purchased for a few pennies, was considered a real treat when added to a sandwich. For a period during the war, two German prisoners interned locally were assigned to work in the cultivation process.
Sadly for the industry, public tastes changed after the war and even though watercress was still required for some time afterwards, new foods and foreign produce were strong competition.

The railway service deteriorated and the Church Street line closed. London markets became overstocked and prices fell. Beds were lost to gravel digging and building developments. However, a local greengrocer still provided a limited supply of watercress from the farm to his customers until the late 1990's.

Map showing the watercress beds at the farm 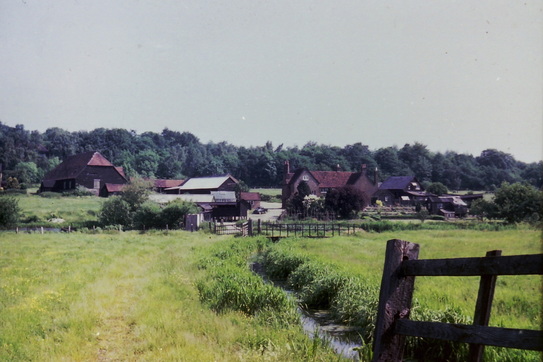 For many years the barn had been thought to be a tithe barn and written as this in many articles. In 2002 'Friends of Croxley Great Barn' was set up and as the barn would not have been used for 'tithes' it is now referred to as The Great Barn.
Adjacent to the farmhouse is a barn built around 1400  measuring approximately 101ft x 40ft and is considered one of the largest in Hertfordshire. The barn was initially constructed as a timber frame on low brick walls and tiled roof. Internally there are five bays, which were probably used for animals during winter months, a hoggin floor and flint walls.

Following Henry VIII‘s brutal dispute with the Catholic Church, ownership transferred to the Crown and the barn was leased to William Baldwin.

The Barn, along with other areas of Croxley Green including the farm were purchased by John Caius. The barn probably received regular maintenance while it was in use, but fell into disrepair in the last century.

During the 1930’s, possibly due to lack of funds and its size, the barn deteriorated even further and subsequently with the onset of the Second World War it remained neglected. Parts of the roof began to collapse.

In 1973, Herts County Council embarked on discussions to purchase the building and surrounding land with owners Gonville and Caius College, Cambridge. The intention was for it to be used by the nearby St Joan of Arc School Rickmansworth for recreational purposes. By the middle of the 1980 with the assistance of a grant from the Department of the Environment, the barn was restored and was granted a Grade II status. The school purchased the barn in 1994.
Friends of Croxley Great Barn was set up in 2002