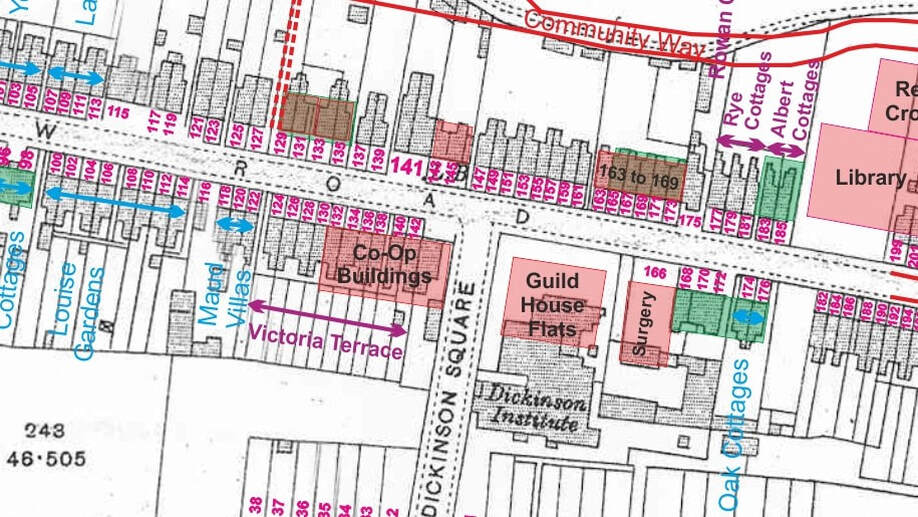 Map Data: Purple - Early Cottage Names / Blue - Current Cottage Names / Green - Buildings on 1880 OS Map / Pink - Buildings since 1914 OS Map
The Co-Op Store
The original store was actually opened in the cellar of Croxley Mill in 1887, selling meat, tea and dried fish on a co-operative basis. It was registered in 1888 as the “Croxley Co-Operative Society” and in the following year it moved into a cottage at No. 5 Milestone Field which had recently been built by John Dickinson. Milestone Field was referred to as “Mill Square” in the 1891 census and was later renamed Dickinson Square.
The site of Nos. 132 to 146 forms the current Co‑Op complex.
The block of ten cottages, constructed as two blocks of four and a block of two, can clearly be seen adjacent to Maud Place / Villas, between the prominent gables of Louise Gardens and the Co-Op corner shop in the adjacent photograph from 1908. 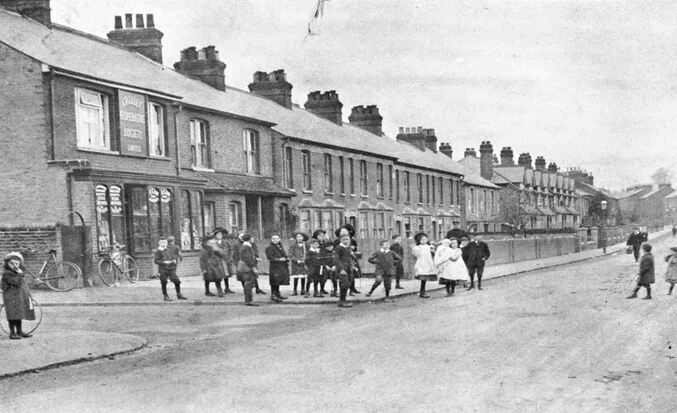 Co-Op c1908
It is also interesting also to note the style of dress of the children, particularly the girls in their white smocks. 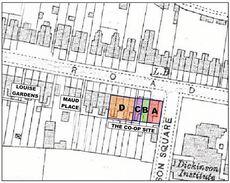 In 1904 the shop moved to New Road on the corner of Dickinson Square on the site now occupied by Co-Operative Funeralcare and this original New Road location is shown in the 1908 photograph. At this time it occupies the end, albeit slightly larger, cottage in the row.
The nearby extract from the 1914 OS plan may help to track the various changes which have led to the layout of the current store and adjacent shops.
The first Co-Op store in New Road is the building shown on the OS plan within the pink rectangle lettered “A”. It can be seen from the photograph that it didn’t extend quite to the edge of the flank in Dickinson Square, leaving space for a large black gate and a path through to a shed or store of some sort at the rear exactly as shown on the plan. This outbuilding can still be seen as you enter the car park at the rear of the current store as can be seen on one of the photos below.
I can find no written confirmation, but I am informed by a number of local residents that, some time between 1930 and 1950, the original store was demolished and replaced with the purpose built, two storey brick building which now stands on the corner.
This new store was slightly wider than the original, having now expanded across the previous side alleyway right up to the boundary of the site.
The advert from the July 1939 edition of The Croxley Argus reproduced here shows a range of goods which is far wider than one might expect from a standard local Co-Op store, so I suspect that the rebuilding had, by that time, already taken place. 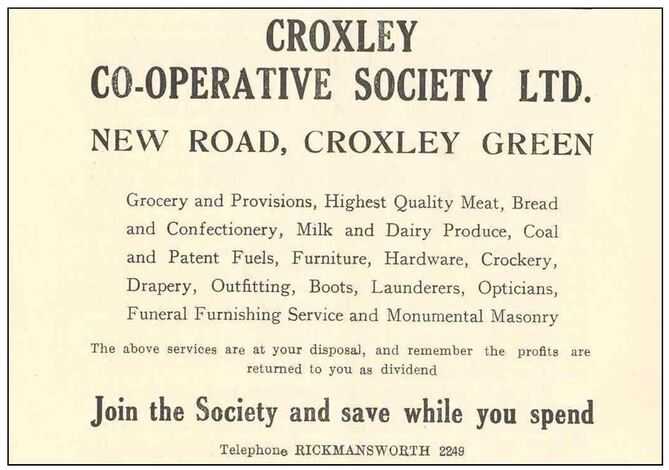 Local residents have described it, almost lovingly, as being an exceptionally good local “department store type of building”, selling furniture, clothing etc. upstairs and meat, groceries, vegetables other smaller goods downstairs, and surpassing anything available then in Rickmansworth and only bettered by a handful of stores in Watford.
The size and style of this “new” building is still obvious from the latter day photographs, both from the front and the rear.
The ground floor is currently used by the Co-Operative Funeralcare and the upper floor appears unused although it has at various times in the past been used as offices and a physiotherapist.
The next two houses also appear to be part of the original block of ten which were called Victoria Terrace. They are marked B and C on the OS map, and appear still to be residential in the 1908 photograph on the previous page.  Their outline is still clearly visible from both the front and the rear of the buildings.
At the time of writing, the left hand side is “CJ barbers” a gentleman’s hairdresser, having until recently been the site of “Fantasy Flowers” (now located on the other side of the road at No. 141). (CJ barbers moved out in 2019 and is now located further down the road.)  The right hand of the pair has a cash machine on its front wall and has, I think, facilities for the Co-Op staff behind.
​At some period between 1950 and 1980 the middle block of four cottages from the original terrace, shown orange (block D) on the OS map above, were demolished and a new, single storey store built in their place.
The large scale plan of Dickinson Square below indicates the slightly unusual numbering system, which is still in use today. It must also seem a little eccentric to visitors who don’t know their way around, that Dickinson Square and Dickinson Avenue abut at a seemingly random point along the road, with No 63 Dickinson Avenue next door to No 38 Dickinson Square on the north side, with numbers going in opposite directions, and No 54 Dickinson Avenue next to No. 39 Dickinson Square on the south side. I expect the postmen are used to it by now! 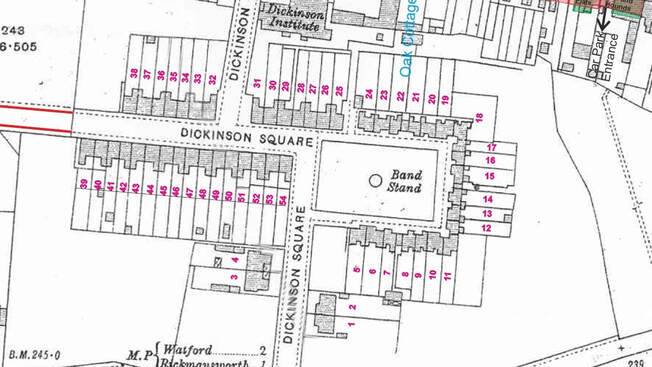