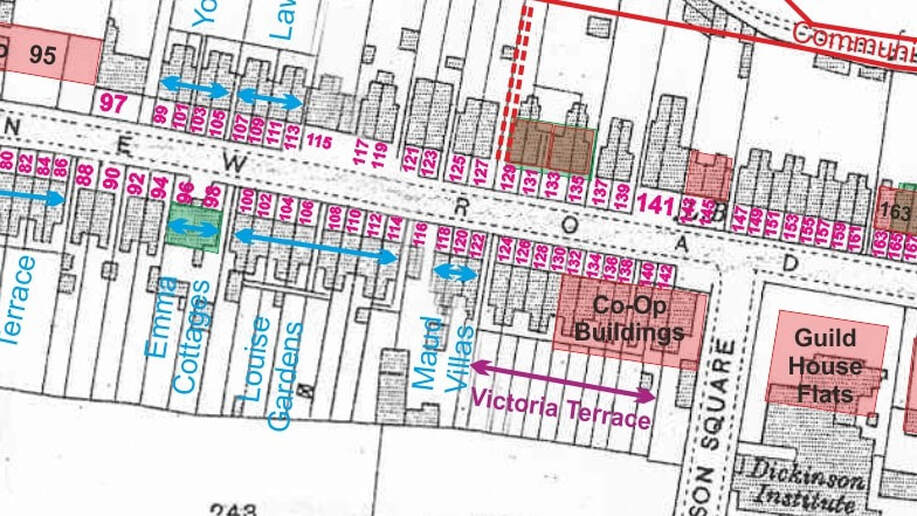 Map Data: Purple - Early Cottage Names / Blue - Current Cottage Names / Green - Buildings on 1880 OS Map / Pink - Buildings since 1914 OS Map
Nos. 118 to 122 were actually named “Maud Place” on the 1891 census but at some time between then and now the name has been changed to Maud Villas, as a plaque on the wall indicates. This one, fortunately, does have a date - 1884.
I don’t know either the timing of the change of name or the reason for it – perhaps the owners just thought the new name sounded a bit more “up market”? Or perhaps it was just a transcribing error by the census enumerator between his site books and the final census sheets?

Maud Villas in 2006
The 1910/11 Kelly’s gives the occupier of No.120 as George Canvin, Coal and Corn Merchant. As we saw earlier, by the mid 1930’s George Canvin had relocated to No.165.
There is one more block of four cottages before the start of the Co-Op complex. They are currently numbered 124 to 130 although at the time of the 1891 census they were the start of a block of ten dwellings under the name of “Victoria Terrace”
PREVIOUS PAGE  /  NEXT PAGE