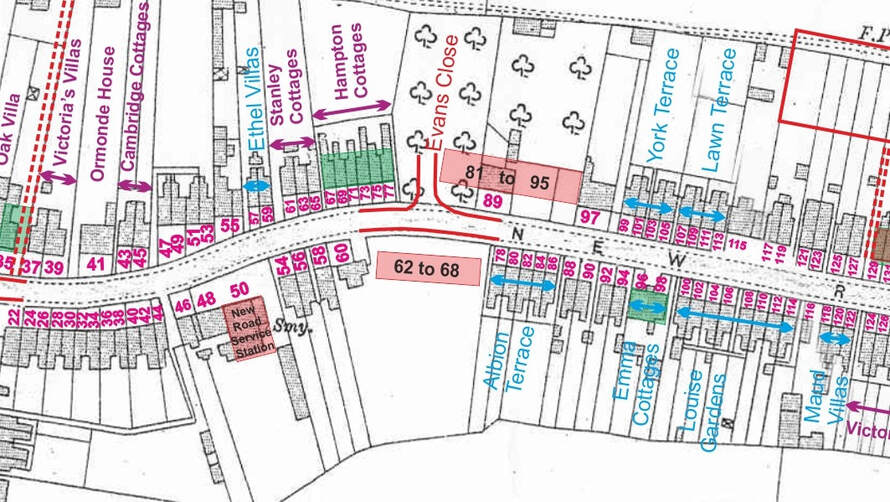 Map Data: Purple - Early Cottage Names / Blue - Current Cottage Names / Green - Buildings on 1880 OS Map / Pink - Buildings since 1914 OS Map
No. 54 was listed in the 1930 Kelly’s as Stanley E Marsden, Fishmonger.  (It has been suggested that he also sold cooked fish and chips but I haven’t been able to verify this.) By 1940 it had become David Samuel, Hairdresser and in 1968 was Sketchley’s Cleaners. The window with the curved top which was just visible in the background of the earlier photograph of the Gibbs boys can be clearly seen – now reverted to a proper window!
I have been told that the both the shop and house entrances were originally on the side wall and alterations to the brickwork can be clearly seen so this seems quite feasible..
In 1940, No. 56 was William Collins, Boot Repairer. Both this and the previous shop have now reverted to private houses.
In the 1910/11 Kelly’s, No,60 is listed as Thomas Young, Shopkeeper.
No. 86 is listed in 1940 as being the location for the “National Deposit (Approved) Friendly Society”. Whether it had a commercial frontage or ran from a private house I don’t know, but it is private now.
Nos. 96 and 98 are reputedly the oldest cottages in New Road. Now called “Emma Cottages”, a modern tile plaque on the front indicates that they were built in 1869.
No. 98 is listed in the 1881 and 1891 censuses as being in residential use and there is no mention of any later commercial use for this location, so it could be that the two cottages were combined when it became a shop – I don’t know. Although they have now been quite tastefully face-lifted (apart from the plaque!), I suspect that the shells are still the original.

The next two blocks, each of four houses, are numbered 100 to106 and 108 to 114 respectively. Both blocks are named “Louise Gardens”, or, to be more accurate, the first block has just “Louise” on its plaque because the other half has, at some time in the past, been rendered over.