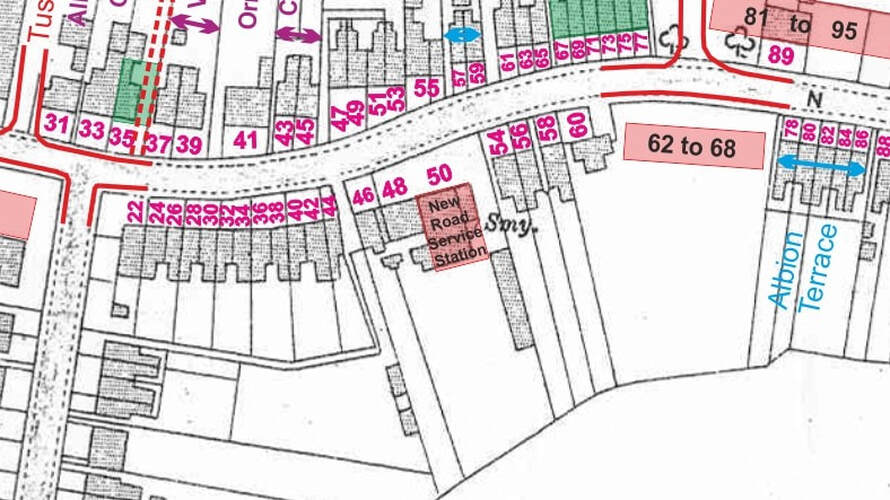 Map Data: Purple - Early Cottage Names / Blue - Current Cottage Names / Green - Buildings on 1880 OS Map / Pink - Buildings since 1914 OS Map
The next building of interest is No. 50 – currently New Road Service Station. In 1889 Jesse Gibbs, a Blacksmith, started a Smithy in a hut adjoining his house. He was also a Methodist Lay Preacher.
The photograph alongside shows Jesse Gibbs and his wife Ann standing outside their cottage next to the smithy. Note the paling fence and the smithy door opened back across the adjacent window. These can also be clearly identified in the photograph of his sons below.
By 1920 the business was listed as Gibbs and Sons, Blacksmiths – he is known to have had at least four sons – Albert (1884), James (1879), Dennis (1893) and Walter (1875) - and it continued in use as a Smithy until the 1950s.  He also had at least three daughters – Annie (1881), Amy (1883) and Edith (1891).
​The photograph above right shows the four Gibbs boys. Note also the slightly curved window behind the wagon which can still be seen in the photograph of No. 54 later.

The family also ran a second Smithy, opposite All Saints church, roughly where the Saloon Bar of the Sportsman Public House now stands.
According to "An Outline History of Croxley Green" from the Croxley Green website, Mrs Gibbs (wife of Jesse Gibbs) and George Wilbee ran local "wagonettes" into Watford in the late nineteenth century, at a cost of sixpence a head, until, in the early 1900’s, they were replaced with a formal bus route. A picture of Ernest Wilbee with his three-horse brake outside the Guildhouse is shown later.
In the 1950s it became Mead Autos but still retained a connection with the Gibbs family since Mrs Mead, wife of the new garage owner, was a daughter of Jesse Gibbs.  It remained “Mead Autos” in the attached advert from a 1972 issue of the St Oswald’s church magazine. 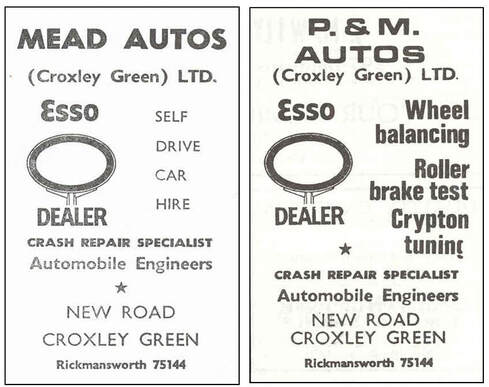 New Road Service Station in 2006
Another issue of the magazine from 1979 has a remarkably similar advert for “P & M Autos” and, although it does not give an address, it still has the same telephone number (retained to this day with an extra 7 in front, as can be seen from the modern day photo). They described themselves as “Esso dealer - MOT, wheel balancing, roller brake test, Crypton tuning. “
Apparently the “P” was Peter Dench and the “M” was Mick – surname not known to me – and they were both former employees of Reg Mead.
At some time during the changes from Smithy to Service Station the Old Smithy was demolished to make way for the newly built garage premises.