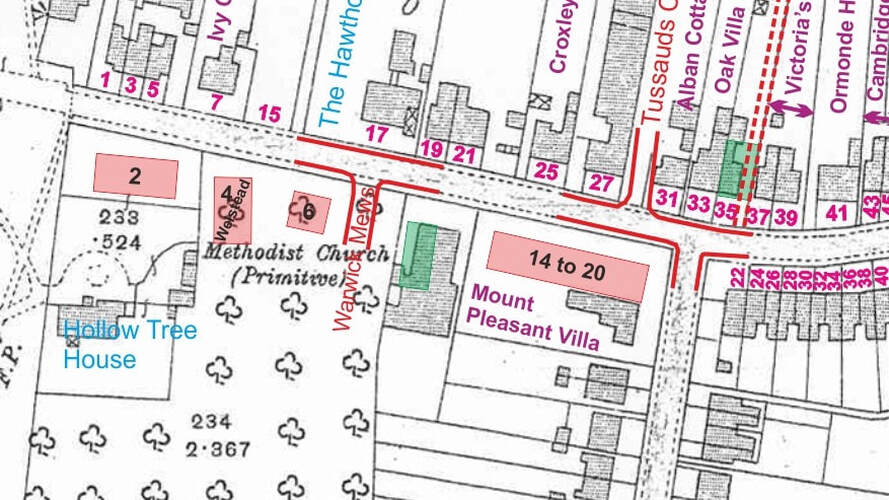 Map Data: Purple - Early Cottage Names / Blue - Current Cottage Names / Green - Buildings on 1880 OS Map / Pink - Buildings since 1914 OS Map
Even numbers between The Green and Dickinson Square
For this next section of our stroll we begin again at The Green, but this time concentrate on the right hand, even numbered, Co-Op side of the road.
No. 2 was, we believe, occupied in 1891 by Joseph Payne who was the enumerator for the census taken in April of that year. A pair of cottages is shown in this location on the 1880 O.S. map but these have disappeared from both the 1898 and 1914 maps, so the current building must have been constructed sometime after this.
There is currently no sign of a name but in the 1940 Kelly’s it was referred to as “Hollow Tree Cottage”. Land on this side of the road was owned by Hollow Tree Farm, a 17th century farmhouse, now called Hollow Tree House, and it seems likely that this cottage may have been named after the original. 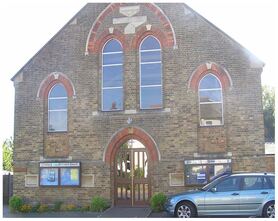 Croxley Methodist Church in 2006
The first building of historical significance down this side is the Methodist Church which occupies plot No. 12. Their website gives a useful account of the history of the site:-
"In 1866, a Methodist by the name of Pierce came to Croxley Green and, finding no Methodist chapel, established a Methodist Society in his own house. Within 18 months, on 16th February 1868, the first Methodist chapel was opened in New Road on a plot of land costing £25.
By 1892 the increased population of Croxley Green meant that a new chapel and schoolroom were needed. The schoolroom was completed in November 1892, and was then used for worship whilst the new chapel was built. Events moved on apace, as the new chapel was ready and opened on 30th April 1893. The whole project cost £1,087!
Further developments included the installation of a pipe organ in 1947 to replace the harmonium, and the construction of the new hall at the rear of the premises in the late 1960s.
The current premises now consist of the main Church, a large hall with a newly refurbished kitchen, toilet facilities and a disabled toilet. There is a smaller meeting room off the main hall, and the smaller, "new hall" to the rear".
There are four plaques set into the front wall of the church which relate to its construction in 1892. It is interesting to note that the local family names of Revell and Rance are present on these plaques.
Nos. 14 to 20 are another more modern block, having been constructed after the publication of the 1914 map. They are built on the site of what was once Mount Pleasant Villa, then the first house in Garden Road (now Yorke Road).
The children moved away from Yorke Road School in the mid 1970s and St Clement Danes used the premises for a short time until their new school was ready. Yorke Road school finally closed in 1976 and the building was leased to Leukaemia Research for offices.  It has recently been converted to four houses.
The road name was changed to Yorke Road in 1898 in honour of Charles Frederick Yorke, former chairman of Rickmansworth Urban District Council.
No. 22 was a shop for many years although now it has reverted to private use.
The 1910/11 Kelly’s Directory shows it as being occupied by Herbert Element, Greengrocer.  By 1919/20 it was listed as “Herbert Element, Grocer” which expanded to “Herbert Element and Son” by 1930 and changed to “Cecil H Element, Grocer” by 1940. According to the 1911 census, Herbert Element,  a Grocer and Confectioner living at No.22 New Road had a son, Cecil Herbert, born in 1901, so it looks as if it was he who took over the business.
In its earlier days the shop had a large sign painted on its flank wall along Yorke Road which could be seen from some distance away. 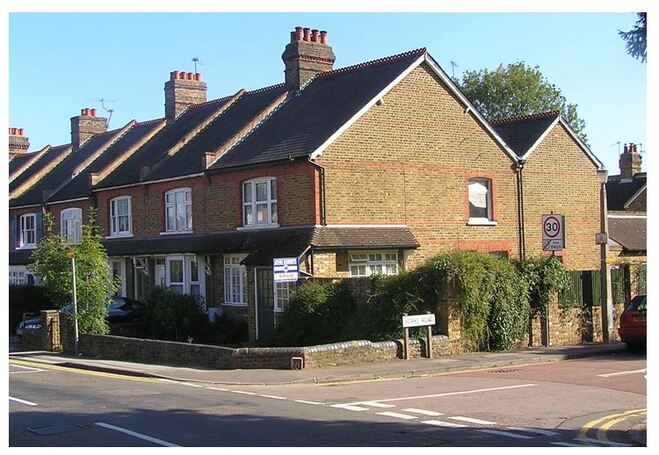 Number 22 in 2006
By 1968 and certainly through 1974 the shop, although still a Grocer, was run by E J Mardling and, as already mentioned, has now reverted to private use.
It is interesting to note the slight up-stand in the dividing wall between each property which breaks up the roof line.
PREVIOUS PAGE​  /  NEXT PAGE