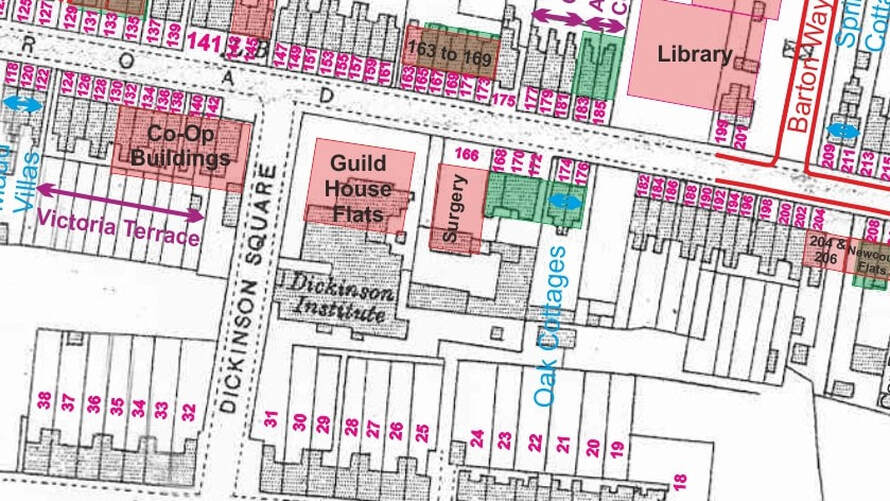 Map Data: Purple - Early Cottage Names / Blue - Current Cottage Names / Green - Buildings on 1880 OS Map / Pink - Buildings since 1914 OS Map
No. 166 is the New Road Surgery.
In the 1974 Kelly’s it was listed under the name of Dr Fowle.  Another well known member of the practice at that time was Dr Russell.  One of his later partners was Dr Garrow and also Dr Christie who, in addition to his medical career, was a leading song writer and performer in the musical entertainment group “Instant Sunshine” who made many appearances on the radio, T.V. and at cabarets.
Early maps do not show any dwellings ever having been built on this site previously and I currently have no information on possible previous usage. 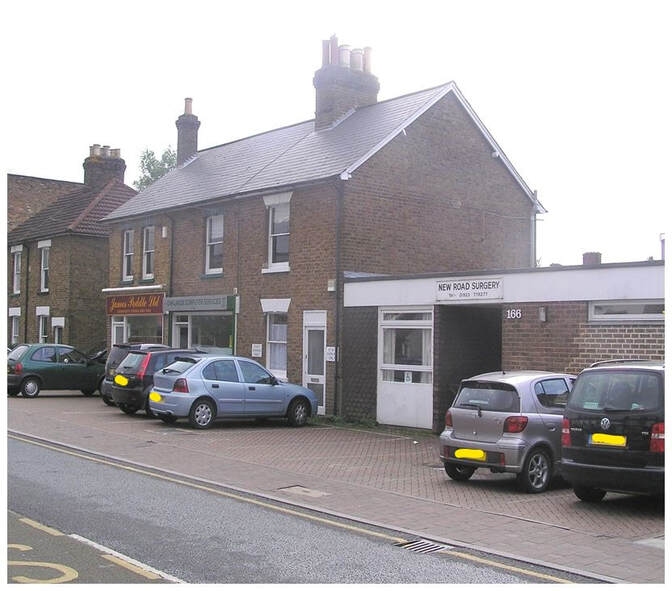 New Road Surgery in 2006
The second, No. 170, was listed in 1974 as Adminco Ltd, Plastics Engineers and for some time between then and 2006 it was occupied by Grosvenor Estates, Estate Agents now resident across the road at No. 163. It is currently occupied by Oaklands Computer Services.

The third house, No. 172 was listed between 1891 and 1920 as “Joseph G Foster, Dairyman” or “Foster’s Dairy” or “Joseph Foster, Cowman” and other very similar titles.
In the 1891 census he is shown, then aged 34 and single, occupying the property as head of the family with his mother-in-law Betsy Foster, then a widow aged 77. 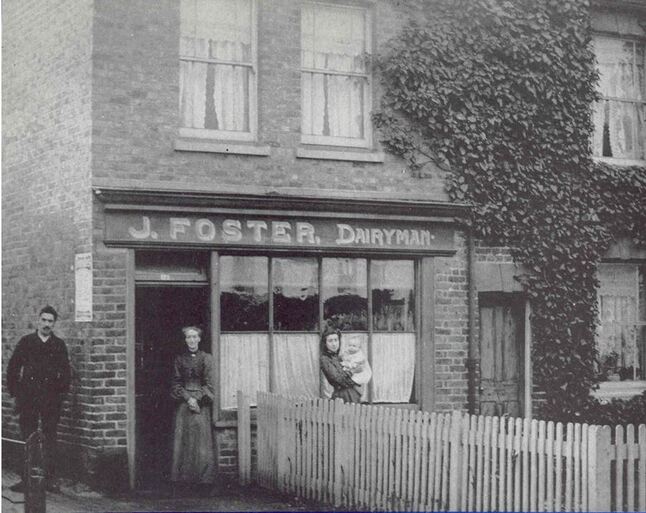 Fosters Dairy circa 1895
The earlier 1881 census, however, shows Joseph Foster, Dairyman, living in this area (the exact location is impossible to determine but it is probably here) with his mother Betsey, (aged 66) and father John Foster (age 54) – slightly different spelling but clearly the same woman whose husband had died in the intervening ten years. It must be that the “Mother-in-law” title was erroneous Perhaps he didn’t want to be seen as still living at home with mum!
This situation didn’t last for too long, however, because the 1901 census shows him living, then aged 47, with his wife Emma and his daughter Cecilia who had been born in 1895.  At the time of her birth he would have been 41.
Joseph and Emma had a second child, a son who they also called Joseph, in 1903 when Joseph (the father) was aged 49.
The above photograph clearly shows a woman, probably his wife Emma, standing in front of the shop holding a young baby little more than a few months old. So, assuming that the picture was taken in the year of birth of one of his children we are faced with the choice – in the photo is he 41 with Emma holding Cecilia (c1895) or is he 49 with Emma holding Joseph junior. I have assumed it to be 1895.
By 1974 it had become “Bakers Estates”, estate agents and “F J Thompson and Co., Chartered Surveyors”. I suspect that they shared the premises with the Surveyors, perhaps, having an office upstairs?

Currently it is occupied by “James Peddle Ltd., Funeral Directors”.

A comparison of the rather faded old photograph of the dairy with the modern day shop clearly indicates that this is still the original building.
You can even still see the drainpipe which divides it from the next door, the strange turned up window sills and even the sash windows look as if they are still the originals. 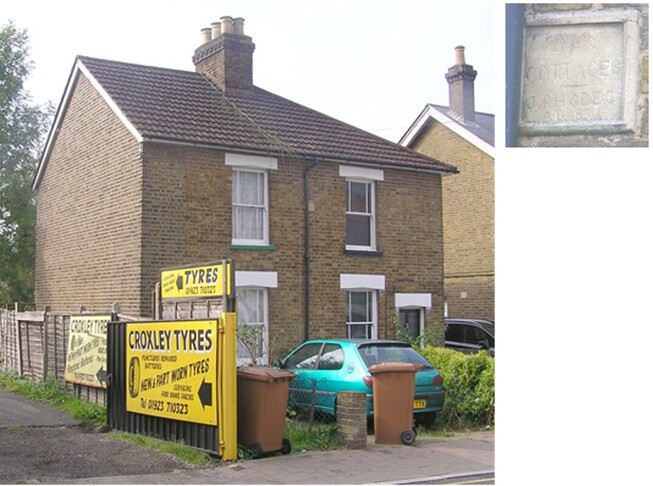 Numbers 174 and 176 Oak Cottages in 2006
The next pair of cottages, numbered 174 and 176, are also shown on the 1871 OS map.
They look to be privately owned and have a very small plaque on the front, almost covered by the drainpipe. It is very difficult to make out, but it reads "Oak Cottages - J Rhodes - A.D. 1870".
I assume that J Rhodes was the original builder although I have no information.
As can be seen from the adjacent photo, this pair of cottages was constructed with a sloping side to the roof on the right hand end and a vertical side to the roof on the left.

Also the next site appears never to have been built on, so it could be that another similar pair was planned to be erected at some time in the future but this, for some reason, was never carried out?
PREVIOUS PAGE  /  NEXT PAGE