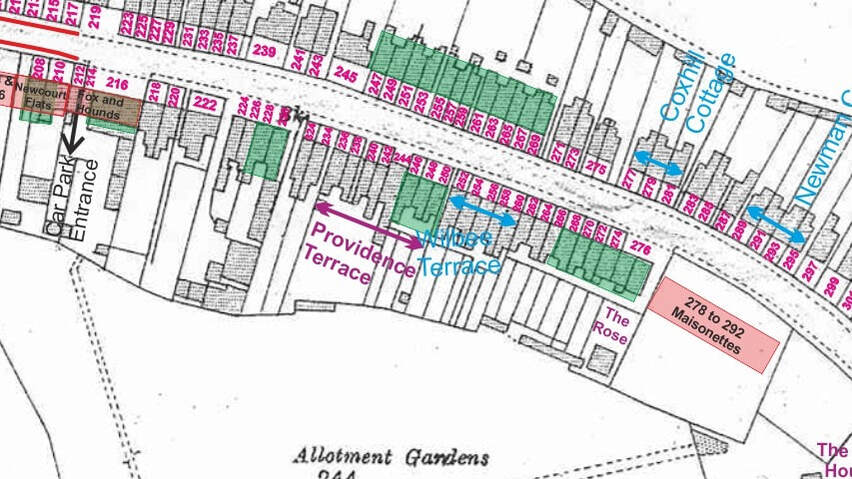 Map Data: Purple - Early Cottage Names / Blue - Current Cottage Names / Green - Buildings on 1880 OS Map / Pink - Buildings since 1914 OS Map
As we saw earlier, Albert George Batchelor was occupying No.31 in 1930 so he must have relocated here some time in the intervening five years, I can’t believe that he had enough trade to be operating both locations in the same road.
By 1968 and again in 1974 it was listed as the “Launderama, Laundrette” – a sort of “do-it-yourself” washing and drying facility for those who did not have access to their own washing machines.
No. 224, on the right hand end of the block, was listed in 1901 to “E W Wilbee, Butcher and Jobmaster” and this was confirmed in 1910 and 1920.
A Jobmaster was a person who supplied carriages, horses and, if required, drivers for hire. What a strange combination of jobs! I suppose if you could not hire the horses out you could at least eat them! 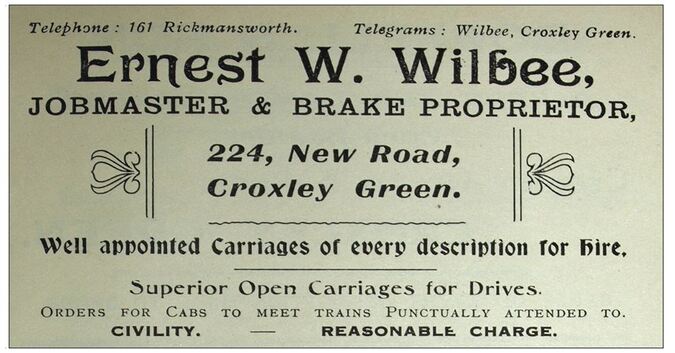 ​We saw earlier, when looking at the Institute, that Ernest Wilbee used this as a pick-up point for his “Three Horse Brake” service to and from Watford.
No. 228, in 1940, was “E M & M T Chater, Chemists” and an advert in a 1963 St Oswald’s church magazine indicates that, whilst remaining a Chemist, it had, by then, become an establishment run by “A R Cross”.

By 1967 it was advertising as “E A W Martin, Electrical Ltd” and, as previously stated, by 2006 it had reverted to private use.
The last of this block of four private houses that were once shops is No. 230 and it, too, has been found in four versions of the Kelly’s Directory

The nearby advert is from a 1939 edition of The Croxley Argus and we can see from this that it was also a lending library.
In 1968 and 1974 it was “Mrs E L Gibbs”. (A possible connection with the Gibbs family from the Smithy at No. 50 perhaps?)
The next block of eight cottages, No. 236 to 250 were named in the 1891 census as “Providence Terrace” although no trace of any such name is now evident. The occupations of the heads of each of the families in this block listed in the 1891 census are quite diverse, including, in addition to the now almost obligatory mill workers, a canal boatman, a ship-hand, a widow “living on own means (generally meaning a pension or inheritance), a groom and two brothers living at No. 244, Arthur and Ernest Wilbee who list themselves as “Grocers Managers”.
This last entry is interesting because the census only included locations which were residential properties. This seems to be the first reference we have found that a shop might have been operating from a residential property. To support this, the 1890 Peacock’s Directory lists “Wilbee Brothers” under the trade section - unfortunately without any details of what the trade was or the address from which it was operating. This was repeated in the 1896 edition and also in the 1901 Kelly’s with the additional information that they were “Provisions Dealers”.
In the 1906 Kelly’s Directory, just after the time when house numbering appears to have been introduced in this area, a “Walter J Wilbee, Provisions Dealer” was listed at No. 244 and this was continued in both the 1913 and 1920 editions.

​The 1881 census lists two Wilbee families. One, living in “Providence Place, Sarratt” - an amazing co-incidence in the address, but not the same as “Providence Terrace, Croxley Green” - had, amongst others, two children called Arthur and Ernest and I’m sure that these are the same family whose boys later moved to Croxley Green to start their career as grocers. It can be no coincidence that their father was already a grocer, draper and furniture dealer.

The other Wilbee family also lived at Sarratt, this time on The Green,  and the Head of the family, Walter J Wilbee was also a grocer and master baker. By 1906, as we have seen above, No. 244 was being run by “W J Wilbee, Provision Merchant” so it looks very much like a family collaboration.
It could, of course, be that it was the two fathers (rather than the two sons) who first began the Wilbee Brothers provisions business. Who knows?
The Wilbees obviously became a prominent family locally because the family appear to have, at various times, run businesses at other locations - E W Wilbee at No. 224 was a Butcher and Jobmaster listed in 1901 and 1920; Arthur Wilbee, Shopkeeper and Cyclemaker at another unknown location in 1901; George Wilbee and Mrs Gibbs ran a wagonette service to Watford until about 1900; Ernest Wilbee ran a brake (carriage) from the Dickinson Institute (see earlier photograph under No. 140, The Co-Op).
As another small digression, the “Rickmansworth in Retrospect” Calendar from 1980 has a picture on the cover (not reproduced here) headed “London Road, Batchworth” with a description saying it is “a view of Batchworth at the beginning of the (20th) century just prior to the Wilbees taking over the general stores”. Obviously they were selling in this area too!
By 1940 No. 244 had become “Henry Blake, Grocer” and in 1968 it was “Suzanne, Ladies Hairdresser”. As already stated, it too is now a private house. 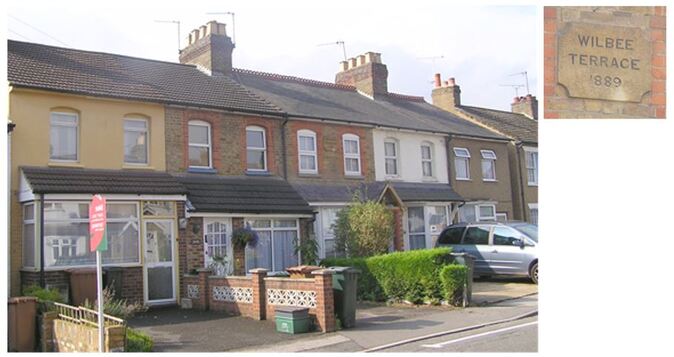 Wilbee Terrace in 2006
Also continuing on the Wilbee family theme, a short terrace of five cottages (Nos. 252 to 260) is called Wilbee Terrace, almost certainly named after this local family.
They might even have commissioned the building of it?
PREVIOUS PAGE  /  NEXT PAGE