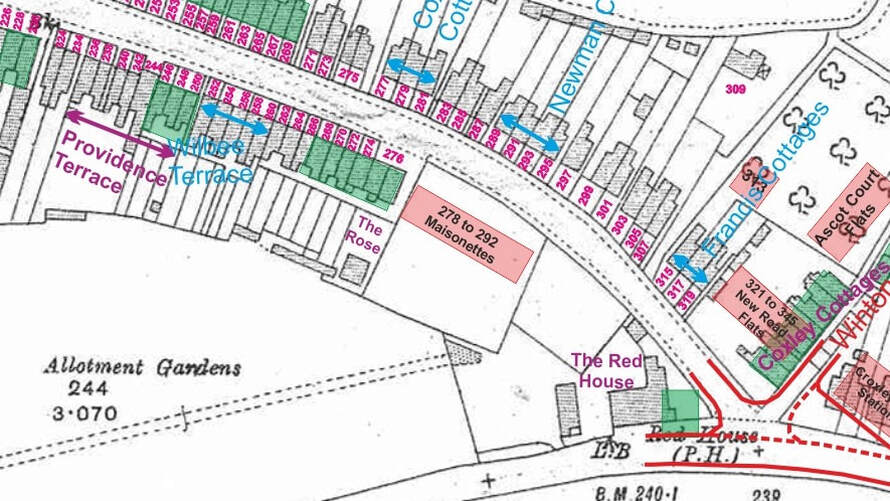 Map Data: Purple - Early Cottage Names / Blue - Current Cottage Names / Green - Buildings on 1880 OS Map / Pink - Buildings since 1914 OS Map
No. 252 (on the right of the photo on the preceding page) is also listed as No. 1 Wilbee Terrace on the 1891 census with the others, from right to left, continuing as numbers 2 to 5. It is shown as being occupied by a George Poney, Police Constable.
In 1910/11, 1919/1920 and again in 1930 it was listed in Kelly’s as being occupied by a Police Constable Joseph Preston Haggar, so it seems clear that for this period it was a Police house.
The late Cathie Child from St Oswald’s remembered there being a sign over the door indicating that this was the local office of the Hertfordshire Constabulary.
In addition to the police constable, this block of cottages housed a canal boatman, a paper mill worker, a widow “living on own means” and the fifth was unoccupied on census day.
The 1930 Kelly’s has No.264 occupied by Alfred G Edwards, Hairdresser.
Nos. 266 was listed in 1940 as “George Burridge, Upholsterer”. It is clearly a private house now but might always have been, as this type of trade would not necessarily require a shop.

Number 276 was the Rose pub on the 1881 census
No. 276 has a history that is both interesting and a little elusive.
In the 1881 census it is listed as “The Rose” with no explanation as to what it was, although we have assumed it to be a beer-house. It was occupied by George Wilkins a 69 year old described as a cowman and agricultural labourer and his wife, Mary Ann, who was then 70.
The 1891 census lists it, still under the name of “The Rose”, but by then it was occupied by Henry Hawkins, beer-house keeper.  By 1901 and again in 1910/1911, still named “The Rose”, its occupier was shown by Kelly’s as Arthur E Pooley, a beer retailer.
Our difficulty was in getting confirmation of exactly where it was and this was finally provided when we found that the 1902 Peacock’s Directory had both the name and the address. It lists No. 276 as “The Rose” occupied by a Mr T W Poclev. It changed use soon after this and the 1913 Kelly’s indicates that it had become a shop, run by a Mrs. M A Clark - the nature of her trade is not stated.
There is a suggestion that the cellar still, today, holds evidence of the old beer engines, etc., but I haven’t yet asked them.
The 1940 Kelly’s entry shows that it had been split into two parts - 276a was occupied by “Mrs M J Connoll, Confectioner” and 276 by Mrs Lilian Robinson, selling “Home Made Pastries”.
I have come across one other advert for these premises, this time in a 1977 St Oswald’s magazine. This is for “B&H Printing Services”, and, again, it just lists their address as No. 276, so it is not clear which side of the premises it refers to.
A local resident has confirmed, however, that he recalls a printers operating from the left hand side of the shop and that their printing facilities were contained in sheds in the garden at the rear.

In 2006 the right hand property was occupied by “Pearson Turner Partnership, Estate and letting agents”, who had previously been located at No. 141.