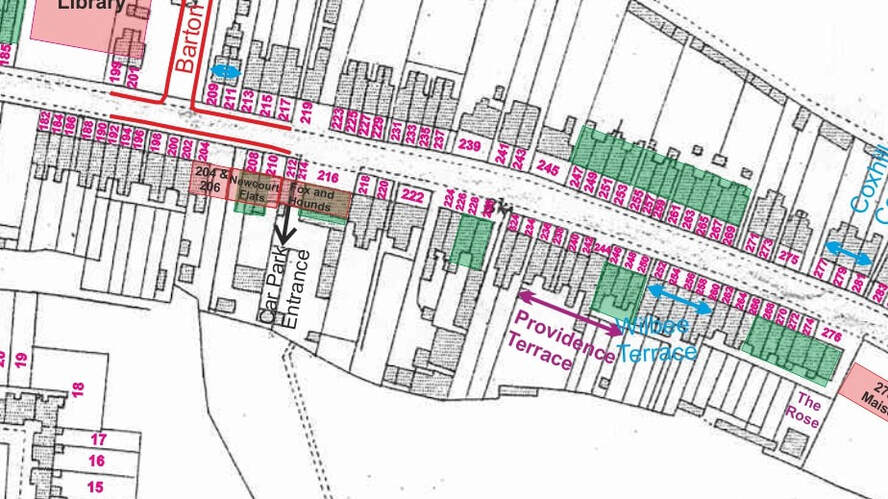 Map Data: Purple - Early Cottage Names / Blue - Current Cottage Names / Green - Buildings on 1880 OS Map / Pink - Buildings since 1914 OS Map
The next five small cottages which still exist, Nos. 194 to 202 were also present, we believe, in the 1891 census, and all of their eleven working occupants were workers at the mill.

Next we come to another pair of shops which have been rebuilt relatively recently - probably, like so many others nearby, in the 1960s or 1970s. (This information is probably available at the local Planning Offices but we have not checked – there is a limit to our resources!)
The first, No. 204, until recently “New Road Dry Cleaners”, having previously, presumably since the re-build, been listed as “J F Sullivan, Turf Commission Agent” (i.e. Betting Shop) in 1968 and “Croxley Turf Accountants” in 1974.
By 1974 it had become “C B Courtnage, Fruiterers” and, in an advert in 1976 and 1977 St Oswald’s church magazines, it was first “M E C Turner, Greengrocers” and then “M and C Turner, Greengrocers”. I can’t be sure but it looks to me like a typing error correction rather than a subtle change of name.

1978, 1979 and 1982 isues of the same magazine have an advert for “R J Cole, Fruiterer and Greengrocer” at this address.
In 2006 it was occupied by “MTB” and currently by “Consortium”
Next another relatively recent new-build. A pair of cottages which were present on the 1871 OS map and would probably have been numbered 208 and 210 (although the house numbering in this stretch is a little difficult to be sure of because so many have been rebuilt), have been demolished and replaced with a block of flats called Newcourt 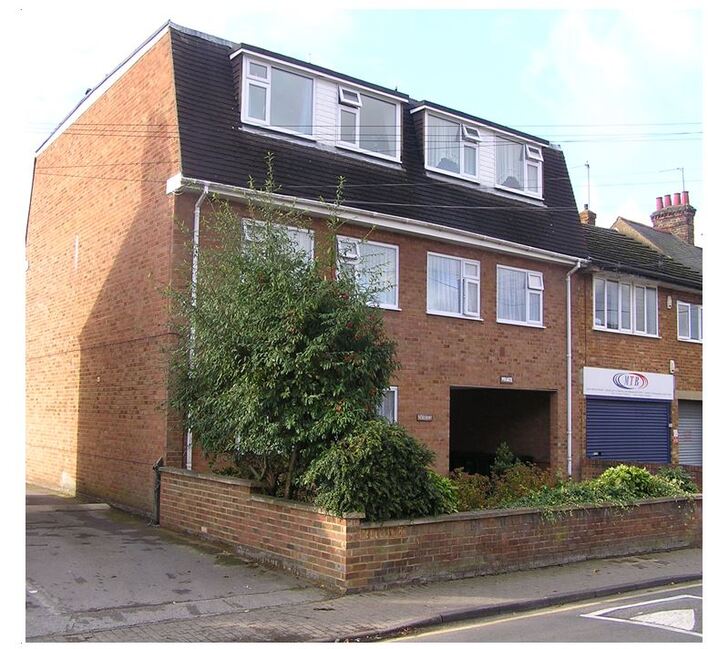 Newcourt Flats
The next major commercial building on this side is “The Fox and Hounds” public house. This building dates from 1866 when the then “open land” was sold to build the pub. Some references suggest that the whole area around here had previously been used for hunting as the name implies.
The public house was originally a Free House until 1923 when it was taken over by the local brewery Salter & Co. During its life it has been tied to Cannon & Salter, Wells & Winch, Taylor Walker and Greene King which it remains today.
Directories and censuses confirm that from at least 1881 to 1901 the Licensed Beer Retailer was George Banting and an extract from the 1891 census return shown below gives details of his family at that time.

It has been suggested that it was George Banting who actually purchased the original land and commissioned the building of the Public House but I have not been able to verify this.
The 1901 Kelly’s Directory shows “Misses Ada and Amy Banting, Dressmakers”. Ada, by that time, would have been about 20 and there is no reference on the earlier census to an Amy Banting, so either she was a much younger sister or perhaps a cousin or some other relative – we don’t know.

Also in 1901 there is listed one “H Colebrook, Beer Retailer” who appears to be sharing the location – or perhaps was next door? In any event, all of the 1910, 1920, 1930 and 1940 Kelly’s list Mrs. Alice Colebrook as the Beer Retailer/Publican and, although the later landlords are not known to me, the pub still remains and appears to thrive.

The Fox and Hounds in 2006
One only has to glance at the roof line in the photograph to see that the building has been added to over the years.
It is not easy to align the older 1880 OS map exactly with the 1914 one which we are using to base the current layout on, but my best estimate is that the original (in 1880) was the area from the centre chimney stack, to the right, up to and including the first bay window (the area roughly between the two drainpipes).
At some time during the intervening years three cottages to the left and one to the right have been incorporated into the main building – I don’t know when or in what order.