A stroll down New Road - Odds 175 to Barton Way 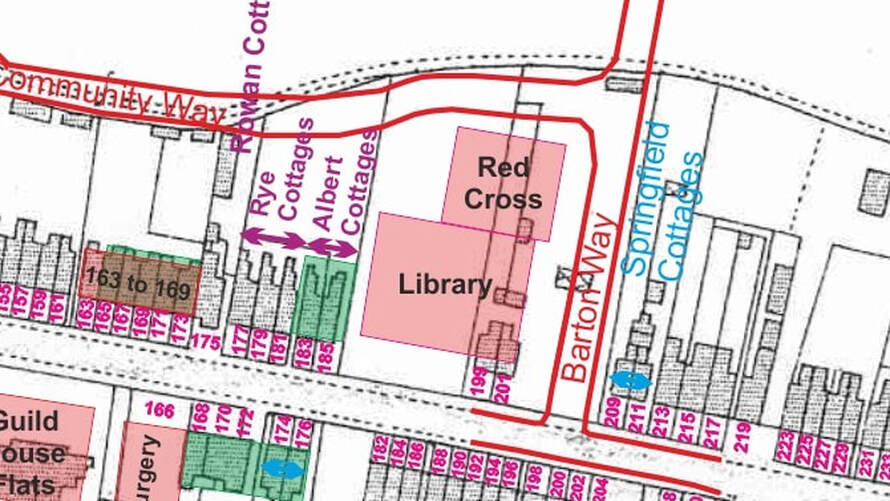 Map Data: Purple - Early Cottage Names / Blue - Current Cottage Names / Green - Buildings on 1880 OS Map / Pink - Buildings since 1914 OS Map
There is also anecdotal evidence that, at some unspecified time, a Mr. Mead sold wet fish from a table in his garden in one of the nearby cottages. The fish were gutted and cleaned in his scullery on the premises.
In the 1891 census, the owners of the cottages in this area, which would have been numbered 163 to 173, had widely differing occupations.
In No. 163 was Henry Gibson a General Labourer; No. 165 was James Batchelor a Ploughman;
No. 167 Sofia King “living on her own means”; No. 169 William Garland, a Boatman (same name and possibly the same person who later ran the Fish Shop at No. 115); No. 171 Charles Puddifoot another general labourer and No. 173 William Gurnett a watercress labourer.
Nos. 177 to 181 are on the 1891 census under the name 1 to 3 Rye Cottages.
​

Croxley Library in 2006
The library was rebuilt in 1994 and its current address is actually Barton Way, NOT New Road.
Barton Way is situated between the Library and No. 209 New Road. The road was built in the 1930s on land purchased from Parrotts Farm. It is named after Charles Barton-Smith, manager of the Croxley Mills from 1895 to 1918. It is now known, however, that he was christened just plain Charles Smith. The “Barton” may have been a second Christian name but it is more likely that it was “created”, making him sound a bit grander as promotion came his way. Over the years it became adopted as a double-barrelled surname and his children all carried the surname Barton-Smith.
In Barton Way, opposite the library entrance, was a marble Celtic cross, salvaged from the Mill on its demolition in the 1980s.  Along with a bronze memorial tablet, it had commemorated the employees of Dickinsons who were killed in both world wars. In 2006 there is an area of hedge which is cut back and looks as if it might have been the site of the cross, which for a while was moved into the garden of the adjacent house for safe keeping. The bronze tablet was fixed to the south wall of All Saints Church and a Garden of Remembrance created in front
PREVIOUS PAGE  /  NEXT PAGE