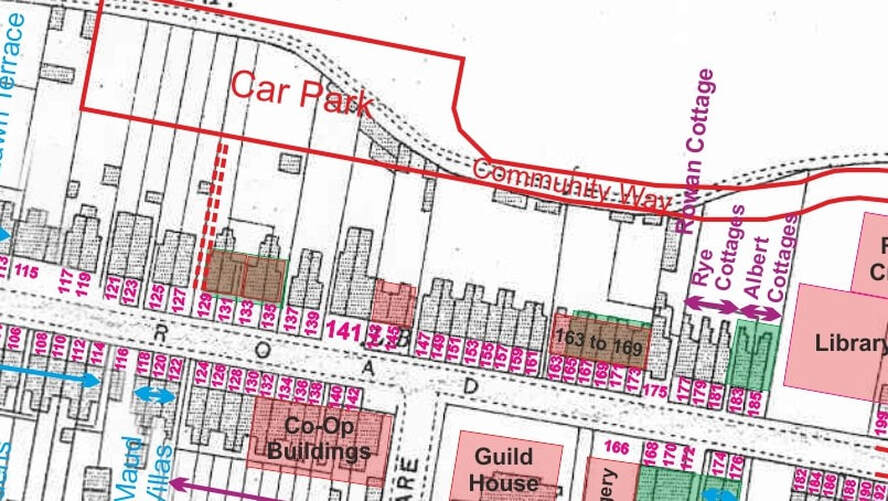 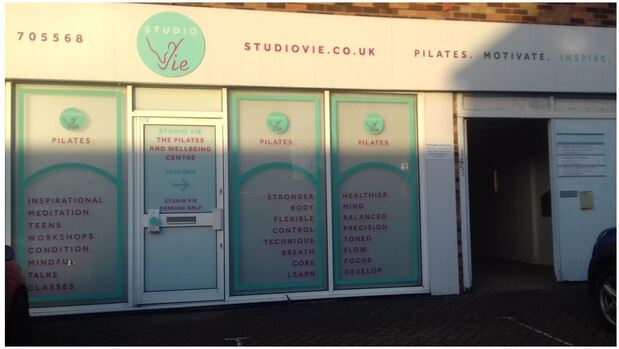 Studiovie in 2006
It is in one of the next, rather pretty little group of six cottages, Nos. 147 to 157 that the grandparents of the late Cathie Child, a long term member of St. Oswald’s church, lived. She recalled many trips here as a little girl from their home in Mill End to visit her granny. 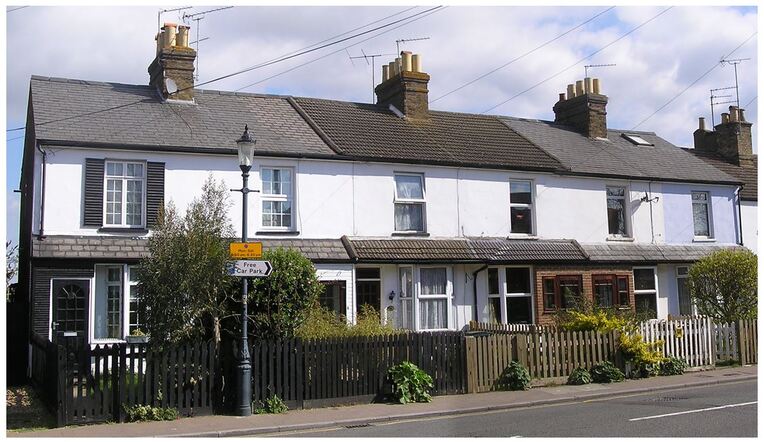 Numbers 147 to 157 in 2006
It is interesting to see in the 1891 census that the occupancy of No. 151 (third from the left) was a husband and wife with their six sons and two daughters. It must have been cosy to say the least!

Note also that 13 year old Stephen was employed in “Crow Scaring”! Not an occupation you hear a lot about nowadays!

No. 159 is the left hand of the next pair of white cottages which were built, I believe, in the period 1880 ~ 1891 and it displays a Sun Insurance Company Fire Certificate plaque on the upper storey, just to the left of the window.
The Sun Insurance Company was established in 1710 and is the oldest insurance company still trading under its own name, now being the Royal and Sun Alliance. It remained as The Sun Insurance Company until its first merger, with The Alliance, in 1959.
In the early days, a house had to show evidence that it was insured before the fire brigade would extinguish a fire, and companies issued their own plaques to be fixed to the outside of their customers buildings.
By 1880, however, the Hertfordshire Fire Brigade was becoming more organised and individual insurance company brigades had been disbanded and, although these exact dates are very difficult to establish, I suspect that this is a modern attachment – it may be an original, but probably not, I suspect, relating to this particular dwelling.  It may, of course, be a replica – I haven’t had the nerve to go and ask!
No. 163 was “Sadik Hairdressers” in 1968 and 1974 (i.e. after the rebuild) and it later became “John Montalbano,  Mens Hairdresser”.

It is now “Grosvenor Estates (Estate Agents)”.  The advert below is from the “The Croxley Resident”.

In the 1910/11 Kelly’s (before the rebuild) No. 165  was shown to be occupied by Frank Holland, Decorator and an A4 paperback booklet entitled “Croxley Green - As it used to be” has an advert from around 1935 for “George J Canvin, Carman and Contractor – Coal and Coke Merchant”.
The advert goes on to say “All kinds of Gravel and Clinker for Garden Paths supplied. Special Quotations for Truck or Boat Loads. Cesspools emptied by contract or job.”  I assume that the “boat loads” referred to would have arrived via the nearby Grand Union Canal.
Another point of interest is that the 1906 Kelly’s has a “George Canvin, Coal and Corn Merchant” living at No. 129 – a few doors up on the other side of the road. It seems an odd combination – Coal and Corn – but it was not so unusual in the 1800s and early 1900s.
In both the 1968 and 1974 Kelly’s Directories the occupier is listed as “Barclays Bank Ltd” and it later became “Wachtel Fox & Co., Solicitors”. The advert alongside is from a past issue of “The Croxley Resident”.
Nos. 167 & 169 were listed as “Budgens Supermarket” in 1968 and at some time later the site was occupied by “Rusts”.
Both the 1930 and 1940 Kelly’s list “Walter Toms, Tobacconist” at No. 169 but I suspect that this, too was an earlier property demolished to make way for the more modern shopping parade.
In October 2006 it became Londis and recently the SmartWay Convenience Store
PREVIOUS PAGE  /  NEXT PAGE