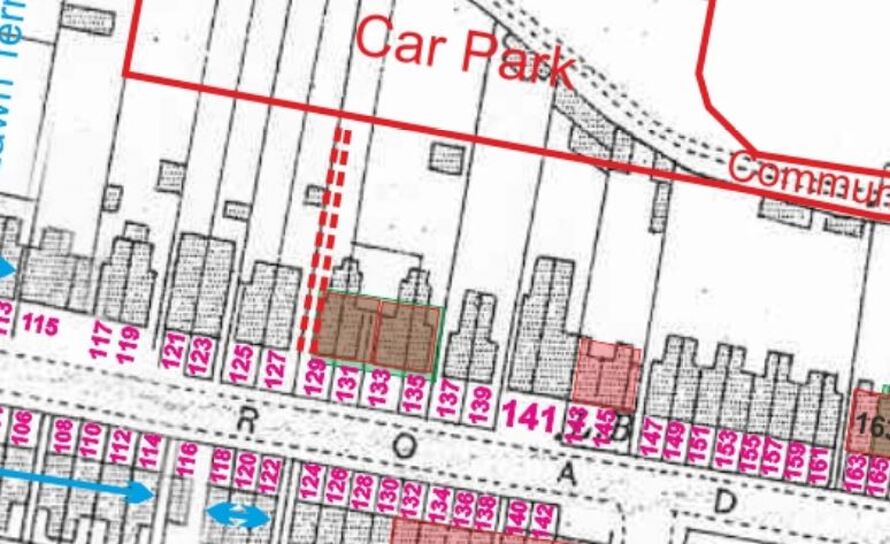 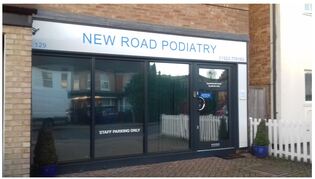 One of the many clocks manufactured by Ernest Durrant used to hang on the wall of St Oswald’s church when it was still a dual use hall. It later hung on the wall of the vicar’s vestry in St Oswald’s church.
Between Nos. 127 and 129 is the short alleyway through to the Community Way Car Park.
None of the properties from No. 83 to No. 127 inclusive were shown on the 1898 O.S. map but all were on the 1914 edition, tying down their construction dates (probably) to within this period.
The first property after the alley is No. 129/131, until recently “Olympic Group Limited” who offered refrigeration and air conditioning design, installation and service, is now the new premises of “New Road Podiatry”, formerly of No.117.

I assume, from the style of the building and the type of bricks used, that this pair and the next were rebuilt in the 60s or 70s, replacing a block of four cottages which were around in the 1880s.
In 1974 No. 131 was listed as “Lloyds Bank Limited”. It is not clear whether this occupied both properties and I have found no previous information on any other commercial use here.

It has been suggested that No. 131 may at one time have been a confectioners and tobacconist and also possibly a sun tanning / health shop, but I don’t have any further information as yet.
Nos. 133 & 135 are listed in the 1968 Kelly’s as “A J Wade, Newsagent and Tobacconist”. Interestingly, No. 125, a few doors previously, had been run by a Mrs H L Wade as a newsagent in 1940. By 1974 the proprietor of Nos. 133/135 was listed as “Lavells”.
The above photograph which dates, I suspect, from about 1910, has been copied from an old local postcard. I find it interesting to note the trouble that has been taken building up the displays of cans in the window and the rather quaint hand delivery cart outside is very much a sign of the times.
Dimmock’s also served as a Post Office for many years and also a Parcels Office for the local London and North Western Railway, as can just be made out from the two advertising boards in the front garden area of the left hand side of the shop. 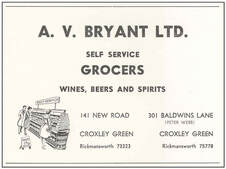 A Mr Alex Bryant came to work at the shop in 1926 and, ten years later in 1936, took it over, by which time the left hand side had been brought into use as a paint and hardware store. Soon after, the name of the store, not unreasonably, was changed to “A V Bryant, High Class Grocer, Provision Merchant and Post Office”.
In 1946 the two shops were made into one and by 1967, as the nearby advert shows, it had become “Self Service” and was also advertising the sales of wines, beers and spirits in addition to groceries.  By 1971 it called itself a “Family Grocers and Off-Licence”.

Mr Bryant remained with the store until his retirement in 1971 when it was taken over by A & J Dickens.
An advert in the St. Oswald’s church magazine of 1972 confirms the new owners (still under the old name but with the new owners’ names in brackets)
A 1988 advert in the same magazine shows it then to have become the “New Road Supermarket (Londis)” specialising in Freshly Ground Coffee.
(One of the beautiful smells of the old high streets that we don’t seem to get nowadays was the smell of roasting coffee beans.)
In spite of the fact that the roof has been renewed, the chimney removed and the windows replaced, the overall shape still appears to be exactly as it was, even including the small flat roof extension on the right.

By 2006 it had been split back into two shops – Fantasy Flowers on the left side and James, Estate Agents on the right.  It is interesting that they both still bear the number 141 although clearly separate units.
The left hand unit recently closed as Fantasy Flowers and is now a very popular Coffee House and Deli. 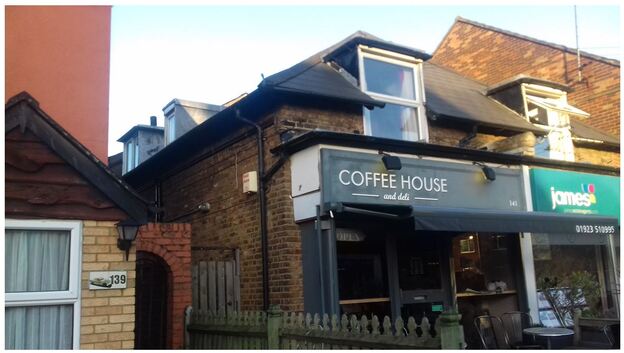