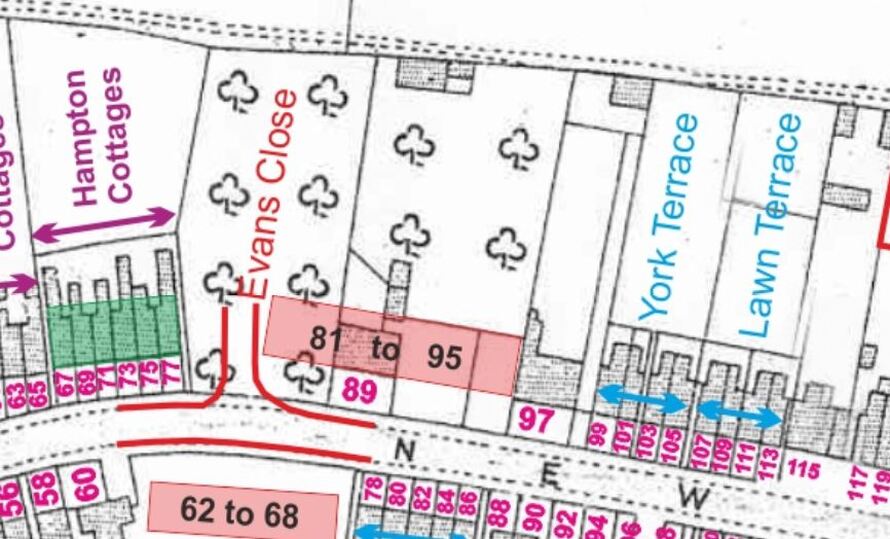 Map Data: Purple - Early Cottage Names / Blue - Current Cottage Names / Green - Buildings on 1880 OS Map / Pink - Buildings since 1914 OS Map
They are shown as existing on the 1871 Ordnance Survey map and, assuming that these are the originals, which they certainly appear to be, then they must be amongst some of the oldest in the road. In the 1891 census they appear under the names 1 to 6 Hampton Cottages – again a name which, by 2006, seems to be no longer used.
Also from the 1891 census, Nos. 69 & 71 were owned by two members of the Element family – another surname which seems to crop up quite regularly. No. 69 was occupied by Henry Element, a Boot Maker, then aged 27 and No. 71, also occupied by a Henry Element, but in this case a Road Labourer, aged 63.
By 1906, No. 69 was listed as “Herbert Element, Grocer”, although nothing else has appeared for this address in the directories that we have checked.
It is interesting to note that, in 1920, No. 119 was listed as “Henry Element, Bootmaker” – quite likely the same one who had earlier lived at No. 69. Later, in 1940, No. 22 adjacent to Yorke Road was run by a Cecil H Element as a Grocers and also, by 1960, No. 115 was listed as “E Element, Fruiterer”. They were all members of a prominent local shop-keeping family.
Digressing a little, there are two Elements - Walter Edward and Sidney Albert - listed on the war memorial on the Green. Both were born and resident in Croxley Green and, according to the web-site http://www.roll-of-honour.com/Hertfordshire/CroxleyGreen.html, both died in France & Flanders - Walter in 1916, Sidney in 1918.
​The 1910 edition of the All Saints church magazine had an advert (shown nearby) for George Morgan, a House Painter and Decorator, so this was probably a private house at that time.

Both of these blocks bear name plaques but are unfortunately not dated.

Judging by their style in relation to others nearby, and the fact that they do not appear in the 1891 census, I would guess that they date from around the early 1900s. 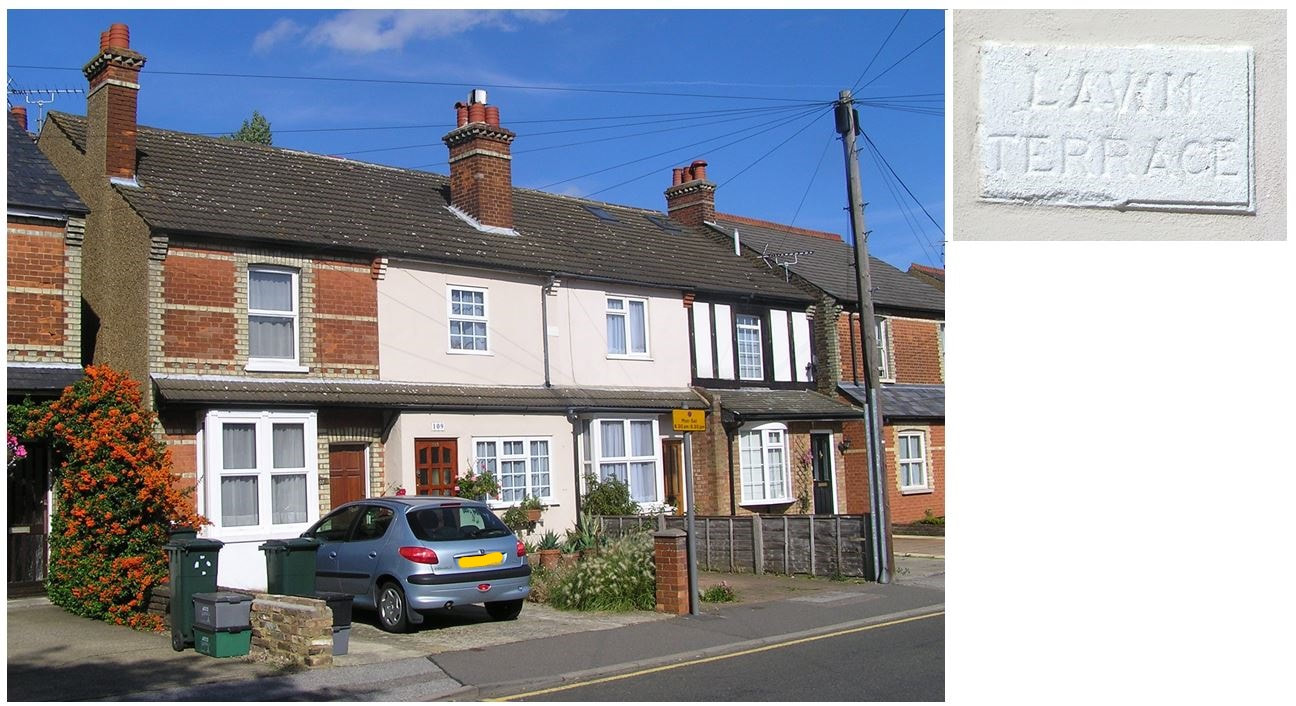 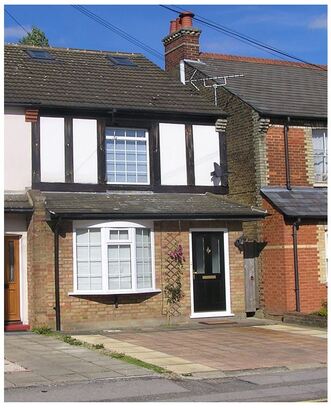 Number 113 in 2006
The next property, No. 115, is now also a private dwelling but in my memory, only a few years ago, it was an Antique shop with a Cycle Repair and Sales shop in the lean-to conservatory-like building attached. The frontage has been built out slightly in the modernisation.
It has been suggested to me that the antique shop was run by the Hitchcock family, who were also connected with Blacketts Nursery in Rousebarn Lane, but I have not yet been able to verify this.

In the 1901 and again in 1910/11 Kelly’s it is listed in Kelly’s as “W Garland, Fishmonger” and I suspect that it had only just been built round about this date.
At some time around this period, it was a poulterers, as the photograph shows, although I have been unable to find any reference to this in the trade directories and so have been unable to date this accurately.
I suspect that the photo dates from about 1910, so it could be that fish is still on display in the left hand window. The quality of the picture is not good enough to tell.
One local resident suggested that the hooks from which the birds were hung are still visible in the ceiling of the front room, although I have not been able to verify this.
The 1891 census listed William Garland, a 25 year old Boatman, living a few doors down at No, 169.  It is only conjecture, but it would not be surprising for him to have changed careers and moved into a more stable occupation running a nearby shop.
By 1920 No. 115 had become “William Garland, Greengrocer”, continuing under the same in 1940.
PREVIOUS PAGE  /  NEXT PAGE