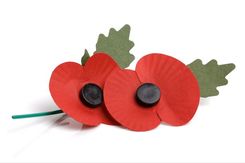 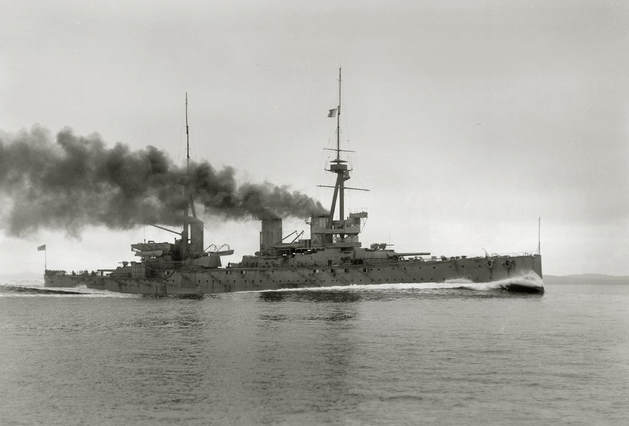 HMS Inflexible: Dardenelles Campaign
​After the Battle of the Falklands Inflexible was repaired and refitted at Gibraltar. She arrived at the Dardanelles on 24 January 1915 where she replaced Indefatigable as the flagship of the Mediterranean Fleet. She bombarded Turkish fortifications on 19 February, the start of the Battle of Gallipoli, to little effect, and again on 15 March, with the same results. She was part of the first line of British ships on 18 March as they attempted to suppress the Turkish guns so the minefields could be swept. Turkish return fire was heavy and she was hit a number of times. A 15 cm (5.9 in) howitzer shell knocked out the left gun of 'P' turret, a 105 mm (4.1 in) shell hit the yard above the foretop and killed or wounded everybody within. A heavy shell of unknown size hit her on the port side 6 feet (1.8 m) below the waterline, but only dished in the side plating. A 240 mm (9.4 in) shell hit the foremast at the same level as the flying bridge and set fire to the navigator's sea cabin. The hit destroyed all the cables and voice pipes running through the foremast to the fire control director. The smoke from the fire was choking the wounded so she withdrew to turn her head into the wind and the fire was then quickly put out. She returned to reengage the Turkish forts and was hit once more with little effect. Later, as she was turning in Eren Keui Bay, she was seriously damaged by a mine, probably about 100 kg (220 lb) in size, that blew a large hole in her starboard bow and flooded the forward torpedo flat, drowning 39 men. She had to be beached at the island of Bozcaada (Tenedos) to prevent her sinking, as she had taken in some 1,600 long tons (1,600 t) of water, but she was temporarily repaired with a cofferdam over the 30 by 26 feet (9.1 m × 7.9 m) hole. She sailed to Malta, escorted by Canopus and Talbot on 6 April. She nearly foundered when her cofferdam worked loose in heavy weather en-route and had to be towed stern-first by Canopus for six hours while the cofferdam was repaired. She was under repair at Malta until early June before she sailed for home. She reached the U.K. on 19 June where she joined the 3rd Battlecruiser Squadron (BCS) of the Grand Fleet under the command of Rear Admiral H.L.A. Hood.