​According to the 1881 census, William Henry Winter’s parents Montague and Eliza were living in Talbot Road, Rickmansworth, prior to their move to Croxley Green where William was born on 26th November 1883.

William attended Yorke Road school.  He is mentioned in the record book as having been absent due to measles. It later mentions William and his sister Maud leaving the school to live in Kings Langley. The family had moved to Railway Terrace, in the Parish of St. Laurence, Abbots Langley as the 1891 census shows. 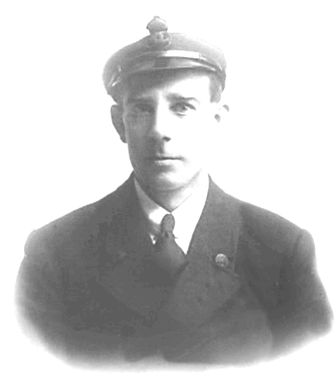 (© loaned by Angela Berry) William Henry Montague Winter
​Montague and Eliza’s family had increased to five children, Florence, Kitty, William, Maud and Lizzie. Montague was employed as a millwright in the John Dickinson paper mill. Several of John Dickinson ‘s mills in the area were undergoing a huge reorganisation during this period and this may have been the reason for the family making many changes to their location.

Montague Winter’s father Isaac, was also a millwright and employed by John Dickinson .  He is documented in The Endless Web, the book written about the history of the company by his great -grand niece, Dr. Joan Evans.  Montague worked at Croxley Mills in the 1870s and 1880s as a millwright. His job was highly skilled and involved installing and dismantling industrial machines. He would also have been responsible for the maintenance and repairs. John Dickinson’s mills, especially at Croxley Green, had some of the most up-to-date equipment for the production of paper.
Simplified, paper was produced by preparing the raw wet materials into pulp, introducing the pulp at one end of the machine, and as it travelled through the many processes and the changes, water was removed. At the other end of this vastly long machine a roll of paper would complete the operation. The term the ‘Endless Web’ is used to describe this procedure.

However, William decided not to follow in the family tradition of millwright, and after leaving school became a gardener instead, as the 1901 census reveals. William was working at Langleybury House, a country mansion and estate in the parish of St Paul’s, Abbots Langley, situated off Langleybury Lane just a few miles from Croxley Green. The owner, Edward H Loyd, a Justice of the Peace, also owned a town house at 36 Lowndes St, Belgravia, a fashionable area of London. The estate supported a farm employing a substantial number of employees. as well as servants for the house. William was a boarder and was one of twenty four employees mentioned in the records.
(Currently in 2020, the house is used as a Film Studio and location.  Part of the original farm is a Children's Farm)

In 1913 William married Selina Alice Gray in West Ham, then in the county of Essex. Selina was born in 1888 in Mile End Old Town, London, and was the eldest of twelve children. Selina’s parents moved several times in Essex as their family grew.

The following year WW1 began and William, at the age of 31,  would not immediately be in the age group  for ‘call up’. As the war progressed, with so many young men being lost in France and Belgium it became necessary to increase the age range for enlistment and older men were now included, especially those with certain skills.

WW1 documents for William shows he first entered his service as F47504 in the Royal Naval Air Service (RNAS) on 23rd January 1918. His occupation is listed a Cycle Engineer, and most likely this is referring to a ‘motor  cycle’. He would have been assessed at HMS President II, a land-based pay and administration office in London. Between 26th January and 16th February, he was at Tregantle, Plymouth a fortified area on the Devon coastline protecting Devonport against possible invasion, and a major naval port. William’s next location was W. Scrubs from 17th February to 31st March, where his war records state he was transferred to the RAF.
On 1st April the RNAS and RFC ( Royal Flying Corp) amalgamated to become the Royal Air Force (RAF). William continued his service at Wormwood Scrubs until 17th July. He was reclassified from Air Craftsman to Air Mechanic 3nd Class and then 2rd Class. His service number changed to 35965.
Wormwood Scrubs was a large area of open land in West London, located in the north-eastern corner, now in the London Borough of Hammersmith and Fulham. It was then the largest open space in the Borough, 200 acres, and still remains one of the largest areas of common land in London.
Prior to WW1 this area was largely undeveloped apart from a civilian prison, making the open land ideal for use by the War Department. Wormwood Scrubs became part of  aviation history when the construction of a shed began on 15th July 1909, supported and funded by the the Daily Mail. The following year a pioneer airship took off in France and crossed the English Channel with six passengers to an improvised landing ground on Wormwood Scrubs. In 1914 all air related activities on the ‘Scrubs’ passed to the authority of the Admiralty and the airship shed was used to train RNAS armoured car crews. The Navy during this time was responsible not only for ships at sea but for their own aircraft and the Admiralty was known as the "Senior Service". The Royal Naval Air Service had officially been recognised on 1st July  1914, by the First Lord of the Admiralty, Winston Churchill. This service was completely separate from the Royal Flying Corps (RFC) except for the Central Flying School at Upavon, near Andover Wiltshire

Wormwood Scrubs was also headquarters for the Royal Naval Armoured Car Division of the RNAS.  Related activities for the RNAS would involve repairing cars for the RNACD,  repairing French engines for RNAS planes. (This country initially relied on the French for engines to build up sufficient numbers of the newly designed aircraft for the war.)  Training for balloon operators and observers  also played a major part on the site. After the end of the war, in 1919, the site was closed. It eventually became used for a sports and leisure facility and is now occupied by the Linford Christie Athletic Stadium.

As the war progressed and the development of aeroplanes increased together with the new RAF, (the first of its kind in the world), William was transferred to Andover, Wiltshire.

The Royal Flying Corps (RFC) opened a station at Upavon near Andover in August 1917 during the First World War. The station was mainly built by German prisoners of war, some of whom left their signatures in roof spaces of buildings on the station. It is close to the Armed Forces Chaplaincy Centre at Amport House and the Army Air Corps Centre at Middle Wallop.
This is appropriate as the station was built as a Training Depot for aircrews, who had completed basic flying training, to learn to fly the Handley Page Type O aircraft.
Following the Armistice in November 1918 William completed his service when he transferred on 24th September 1919 as an A3 66453 reserve. William returned to Essex and his family after he was discharged the following year 30th April 1920.
Information obtained from
Family members
William’s war records.