​William Charles Owen was the son of Charles and Eva Owen.  He was born on 20th December 1918 at 63 Norfolk Road, Rickmansworth, the home of Eva and her parents.

William’s father Charles, the son of Henry and Fanny Owen, 32 New Road, had served in WW1. He enlisted in November 1915 and was initially assigned to the 5th Battalion Bedfordshire Regiment. The following year, in March 1916, he married Eva Gurney just prior to being transferred to the Machine Gun Corps and then mobilised to France.
Charles’ war records show he was hospitalised in 1917 and returned to England with neuropathy symptoms to his feet and also having ear problems. Charles was eventually demobilised in 1919 following the Armistice in November 1918. The Owen family had four other sons who also served in WW1, Alfred, Arthur, James and John, and all survived. 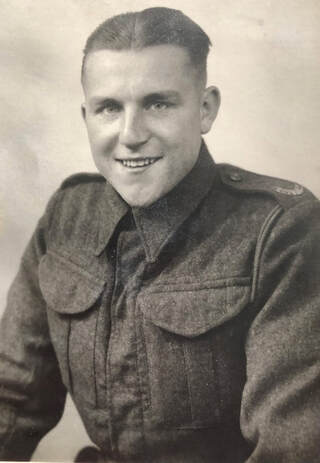 (© Loaned by David Owen) William Charles Owen
Charles was an employee in the John Dickinson paper mill prior to his WW1 service.  He continued to live in the village on his return. At this time, due to war restrictions, house building had temporarily stopped and there were limited opportunities for a young family to move into their own home.

However, Charles, Eva and their young son William were offered temporary accommodation in the Berean Cottages, in front of All Saints church. The cottages were originally built at the beginning of the 19th century by Miss Mary Bentley, who lived in a large country house, Bathhannah Pavilion, on The Green opposite Croxley House. (Bathhannah Pavilion has since had 2 name changes – The Grove and Dugdales)


Originally alms houses, Berean Cottages came into the ownership of Mr. W R Woolrych, a relation of Miss Bentley, who lived in Croxley House. He then sold them to Mr. Woods (of Durrants House) in 1876 and on Mr Woods’ death they were sold to Charles Morland Agnew. However, when WW1 came to an end the ten cottages were badly in need of modernisation, but such was their poor design that it was considered not financially practical to update them.  However, even though they were not up to the housing standards expected, they were welcomed as temporary accommodation for soldiers returning from the war.  A nominal rent of 1d (one old penny) a week had been decided, and the local people soon referred to the cottages as Penny Row or Heroes Terrace.  Williams’ parents were offered one of these cottages.

In 1920 the cottages were presented to the church as the site for a new Parish Hall. It was to take many years for the plan to come into fruition. 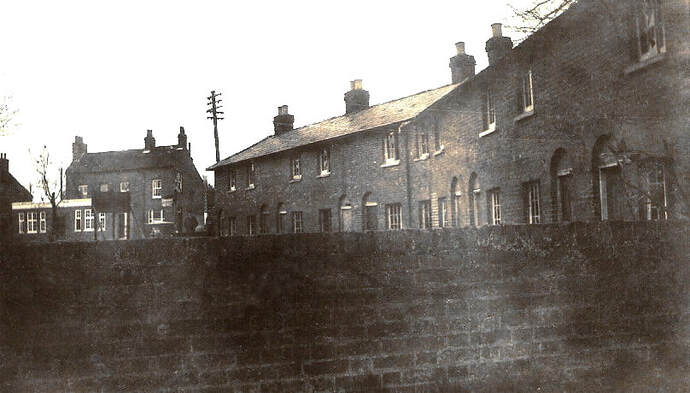 (© Loaned by Margaret Pomfret Collection) The Berean Cottages a home for William and his parents.
To overcome the shortage of housing in the area, the 1920s saw a large building programme by Rickmansworth Urban District Council (now Three Rivers District Council).  It was overseen by the District Surveyor, Albert Freeman, who supervised all the building works for the council. Plans were drawn up for two housing sites in Croxley Green:  Gonville Avenue and Springfield Close. The initial houses in Gonville Avenue were built during 1921 and the first two occupants, who had been living in the Berean Cottages, received the keys to their new homes and their rent books in December of that year. The houses in Springfield Close were ready for occupation by November 1926 and Mr. Frederick Gray of No 4 Berean Cottages moved into 1 Springfield Close.

Charles and Eva Owen were offered 30, Springfield Close as their new family home.
The Berean Cottages were now so far below modern standards that the time for their demolition was imminent. 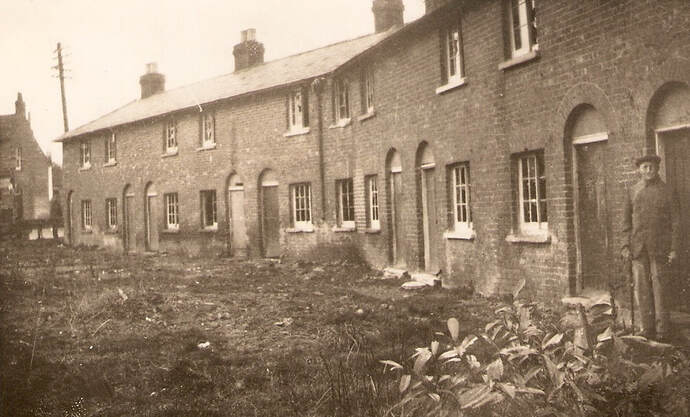 (© Loaned by Margaret Pomfret Collection) The Berean Cottages prior to their demolition for the new church hall.

The Owens’ son William would have attended the local Infant School in Yorke Road and the Boys School in the Watford Road. On leaving school William was employed locally, at John Dickinson paper mill as a ‘Finisher.’  In his teens, in the 1930s, he must have been aware that Europe was experiencing another period of unrest.

Germany was determined to take back control of many of its border areas that it considered had been unjustly taken over by the winners of WW1.  When the German army invaded Poland, with whom the United Kingdom had an alliance, this country issued an ultimatum and, when Germany did not respond, declared war on 3rd September 1939.

William enlisted on 16th October 1939 and joined the 5th Battalion Suffolk Regiment 18th Division, a Territorial Army Unit, where his army number was 5952490.

Soon after enlisting, William was sent for training. William’s son David recalls his father relating some of his wartime experiences.  Whilst on board a ship en route to Halifax, Nova Scotia, Canada, the Regiment was redeployed to the Far East. The ship docked at Cape Town, South Africa, where they disembarked around December 1941. Servicemen were invited to local homes and were given a Christmas dinner. The ship continued to Singapore, the intention being to safeguard this British colony. On 15th February 1942 the Japanese invaded Singapore.  William and many thousands of allied troops were captured and became prisoners of war (PoW).

The 5th Battalion Suffolk Regiment 18th Division,  a Territorial Unit, was part of a convoy initially intended to enter the war in the Middle East. Whilst making the journey, the Japanese had attacked the American base of Pearl Harbour on the Hawaiian island of Oahu. The convoy was redeployed to protect and defend Singapore, a British colony. However, soon after the British army arrived in Singapore it was targeted by the Japanese and several thousand troops were captured including William Owen. 15-02-1942. In the Far East it was calculated the Japanese captured 140,000 Allied prisoners of war, approximately 130,000 civilians including some 40,000 children.

William’s War Records has provided the website with an outline of how he was treated whilst he was a prisoner.

David Owen has also provided the website with some of his father recollections relating to his wartime experience in various PoW camps. One of these was River Valley Road, known as the Death Railway.  The Japanese were looking for a means to shorten the distance between Burma and Siam (now Thailand) along the River Kwai during the Burma Campaign. The aim was to provide a means to transport Japanese armed forces as well as ammunition by passing the sea. Thousands of men died under the strict and inhumane treatment of the Japanese guards.  William Owen told
David that he was hospitalised many times with infections to wounds on his lower legs caused by abrasions from bamboo stubble, as they cleared many miles of bamboo jungle before laying the track bed for the railway. Many of his comrades succumbed and died from these wounds and were cremated at the side of the track by fellow prisoners. William said that the PoW’s were only fed half a bowl of rice a day.   The water they were given to drink was infested with parasites, though they tried to deal with them by boiling the water first.
William had recurring health problems from his leg infections for the rest of his life and stomach problems too.

The website is most grateful to Keith Andrews, Chief Researcher and David Brede, Secretary and Trustee, from the COFEPOW for their research and assistance in helping to find William’s war records. COFEPOW (Children and Families of Far East Prisoners of War) supports those who are the children, families and friends of the many thousands of men, women and children who were imprisoned or interned as well as those who died at the hands of the Japanese in the Far East  https://www.cofepow.org.uk/

Keith Andrews confirms William was in the following camps, Chungkai, Nong Pladuk (3 camps), River Valley Road, Saigon. Prior to the first camp there would be a transit camp at the start of the Thai-Burma Railway (TBR) which was Ban Pong.

William left Changi PoW Camp in Singapore as part of R Party on 31/10/1942 under the command of Lt-Col. A. A. Johnson, 4th Suffolks, destined for Ban Pong in Thailand. When he reached Thailand he became part of Work Group 1 (Allied terminology), Camp 1 (Japanese terminology). Not only were the first two camps along the Railway, they were also Hospital Camps. At the end of June or early July he left Nong Pladuk on a train commanded by Major Seeking destined for Singapore and in particular River Valley Road Camp which was being used as a transit camp for Parties destined for Japan. He arrived around 11/7/1944.
He became part of a Japan Party 4, but it never got as far as Japan due to increased Allied submarine activity. On 2/2/45 he left Singapore on the Haruyasa Maru as one of 2,500 men in Convoy HI-88D as one of three ships and three escorts. (These ships were known as Hellships as the conditions and treatment on them were as inhumane as in the shore camps).   Of the three merchant ships, only the Haruyasa Maru survived by burning all the wooden fittings to increase speed. Once the ship arrived in Saigon, the PoWs were disembarked.  Some went further North in French Indo China, but William stayed in Saigon, which was designated Thailand, Camp 8, but for some reason that is not on his PoW Card.
He was liberated from Saigon on 12/9/45.  He would have been flown to Rangoon, and from there returned home.
Keith Andrews also enlisted the assistance of a colleague from Thai-Burma Railway Centre.
https://www.tbrconline.com/

The  COFEPOW website also supports servicemen who have documented their experiences as PoWs at the hands of the Japanese. Ken Bailey, also in the 5th Battalion, Suffolk Regiment, recounts a similar journey to William Owen’s, to the Far East.  He was also a PoW on the River Valley Road. His experiences can be read here
https://www.cofepow.org.uk/armed-forces-stories-list/5th-suffolk-regiment

My father completed his basic training in Hawick (Scotland) in 1940. His regiment moved to Liverpool and whilst there the unit was sent to assist in digging out survivors and victims from the German bombing raid on the city. He continued to have a great love and empathy for Liverpudlians.
(Ken Bailey also recalled the regiment was in Liverpool).
Prior to being deployed to the Far East my father’s regiment was inspected by H. M. King George VI, who stopped and spoke to my father, asking "How are you getting on?"

My father returned from the Far East by ship and in a Douglas DC-3 Dakota.