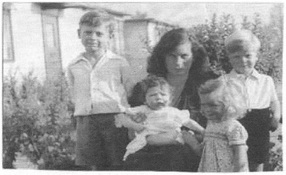 Tom Brady (on left) 1948, 1 Oak Lane
I now live in Perth Western Australia with my family where I have lived for the last thirty one years, Perth our capital city is a clean beautiful place built along side the Swan river, we have a Mediterranean climate i.e warm with clear blue skies for most of the year the temperature averaging in the 20 degrees, in the summer it can go up to 40+ degrees which is very uncomfortable. Western Australia covers a third of the total of Australia and is the largest State, England could fit into it approximately 19 times the population is approximately two million compared to England's fifty million, WA as Western Australia is known is a very rich State it is rich in minerals such as gold, diamonds, nickel, iron, uranium, oil gas, and many more which provides billions of dollars in royalties to the Government from the mining companies, this is then put back into the economy for the benefit of the population. At the present time WA is booming due to China's growing appetite for iron ore which we are having trouble providing due to a shortage of skilled and unskilled workers. I have been fortunate to have travelled around Australia many times, to see its Deserts, Mountains, Rain Forests, beautiful beaches and of course The Great Barrier Reef but I still get home sick for dear old Croxley Green. Having lived the first 22 years of my life in Croxley I have many happy memories of growing up and living there, I was born on the 16th of September 1942 in a Nursing Home in King Street, Watford [now demolished and replaced with modern town houses] just off Watford High Street, after a few days I moved in with my parents, who rented a room in a house in Beechcroft Avenue which we shared with the Hitchman family Mrs Hitchman is Dorothy who celebrated her 100th birthday last year [2007], then we were allocated a wonderful new Prefab at the top of Baldwin's Lane [about 1946] we lived in 1 Oak Lane next to a footpath which divided us from Fosters Farm fields where cows, horses, pigs and chickens all roamed freely, often we would throw stale bread and other scraps of food over the fence of course if the animals saw us they would all hurry over to the fence, ie excited little piglets racing the chickens to the food before it was all gone. {long before free range was fashionable} About 1949 by this time I had two brothers and a sister, Bernard, Kathleen and Sean we were allocated a brand new council house in Owens way, so we moved from the Prefab in Grove Crescent to Owens Way, which was opposite Grove Crescent except for Baldwin's Lane and a very large field being between the two. I can actually remember helping my Dad move from one to the other by the way of a pram loaded up with furniture and house hold bits and pieces and pushing it across this enormous field {now a recreation ground with a pavilion, skate board park and shops}. The new house was wonderful, it had three bedrooms, bathroom with a plumbed in heated towel rail, separate toilet up stairs and down stairs, brick built work shop/shed and backing on to fields. I lived there until 1964 that's when I got married and moved to Luton as houses in Croxley were out of our budget {a three bedroom semi in Croxley was approximately four thousand pounds a ridiculous price} so we moved to Luton and bought one for three thousand pounds. {all relative}

Croxley Green will always be my favourite place in the World, a place that I have a great affection for and holds a special place in my heart, I have many happy memories of living there which include my schools Yorke Rd, Harvey Rd and Durrants, my paper round which started at Luxtons Newsagents and tobacconist shop at the top of Scots Hill across the Green to Apple Garth, Parrots, Little Gillions, Croxley House {where in the Winter I would be paid half a crown a week to go down into the cellars and stoke the boilers} then on to Mrs Barbara Woodhouse's home Campions then follow Little Green Lane to Waterdell House and Little Waterdell and finish off at Grove House and the Prefabs home for breakfast and get ready for school all for ten bob a week. Scrumping as kids we loved it, four favourite places,
• Stones Orchard for cherries, once old farmer Stone nearly caught us but he couldn't keep up so he fired his 410 shot gun at us we felt the pellets go over our heads
• Little Waterdell House for Victoria plums [beautiful] we would put our bicycles against the six foot high wall stand on the cross bar and reach over the wall and pick the plums
• Orchard at the corner of Barton Way and New Rd [where the library is] for pears and walnuts.
• Orchard opposite Durrants Sports field for Cox's apples and cooking apples.
Then there were the Cubs, Scouts, snooker at the Guildhouse, Saturday morning pictures at Ricky, Guy Fawkes night, youth clubs and many many more but I better stop now until next time. So I would like to wish you all a very Happy and Healthy New Year,
From Tom Brady in Australia