​Reg was born on 4th April 1922 to parents Elizabeth (Jarlett) and Alfred Beckley. The family lived at 87 Norfolk Road, Rickmansworth. Elizabeth was born in Greenwich, London but Albert was resident in Rickmansworth.


Reg attended the local Rickmansworth schools and received several Gold Medals for his Cross Country running achievements.
​In 1941 Reg travelled to Chatham Dockyard, Kent, to enlist in the Royal Navy as an Ordinary Seaman JX312972. His choice of military service may have been influenced by his mother’s background as she came from Greenwich, which had strong historical links to the British Royal Navy. 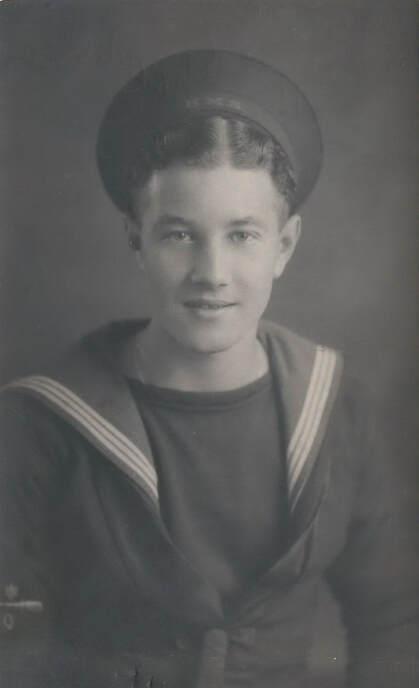 (© Loaned by family members) Reg in his Naval Ratings uniform
​During his wartime service, Reg was attached to many naval land-based establishments/barracks as well as sea-going vessels, before eventually travelling overseas. His original Service Records document the progress of his activities.
As a new rating, as part of his extensive training, Reg first reported to the naval land-based HMS Glendower, Pwllheli, North Wales. Originally this was a newly built Butlin’s Family Holiday Camp, but the site had been taken over for the duration of the war by the War Office. It was temporarily renamed, and used as a training establishment for new recruits. Each chalet accommodated up to eight ratings. The base also operated as a hospital for wounded servicemen. Reg was there between 28th October 1941 – January 1942.

Reg could not swim and during his naval service efforts were made by his ship mates to teach him - the hard way! Several times he was unwillingly ‘thrown in’ but somehow managed to stay afloat, though he never mastered any recognised swimming techniques.

Between January and February 1942, Reg continued his intensive training at Gladstone Dock, Liverpool, on the purpose-built training ship HMS Wellesby. He gained promotion to Able Bodied Seaman.  This came with some responsibilities. This was followed by another shore-based establishment, HMS President III at Bristol, between February 1942 and November 1944.

Due to the high intensive action ships were undergoing at sea during the war, and the many deployments they undertook, it was vital that maintenance was carried out to keep all the equipment functioning to a high standard.  As well as rearming the ship’s gun ports, overhauling the ship itself was critical. The ship’s crew would have shore leave whilst this was being completed. It is quite possible that Reg would have been part of the shore maintenance team servicing the ships.

From November1944  to July 1945 Reg returned to the Royal Naval Barracks at Chatham Docks and HMS Pembroke, another land-based establishment. It would appear from Reg’s Service Record he was now promoted to an AA3 rank and Naval Records show that this means Reg had achieved the status of an Anti Aircraft Gunner.

Even though the war was drawing to a close in Europe following V.E. Day  8th May, there was still a great many tasks for the Navy and in July 1945 Reg was aboard HMS Musketeer bound for the Mediterranean. 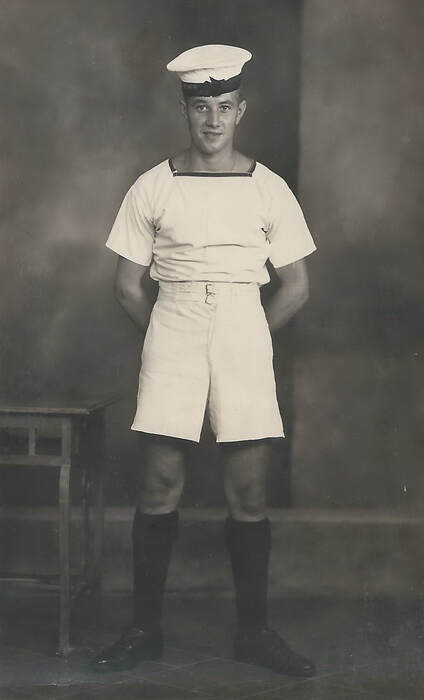 (© Loaned by family members) Reg in his uniform usually worn when serving in areas of the world where temperatures are high
​The Musketeer continued her service in the Mediterranean with Reg on board and helped in the support of the garrisons in Trieste and mainland Greece as well as Malta and Fort St. Angelo, a Maltese Garrison in WW2. 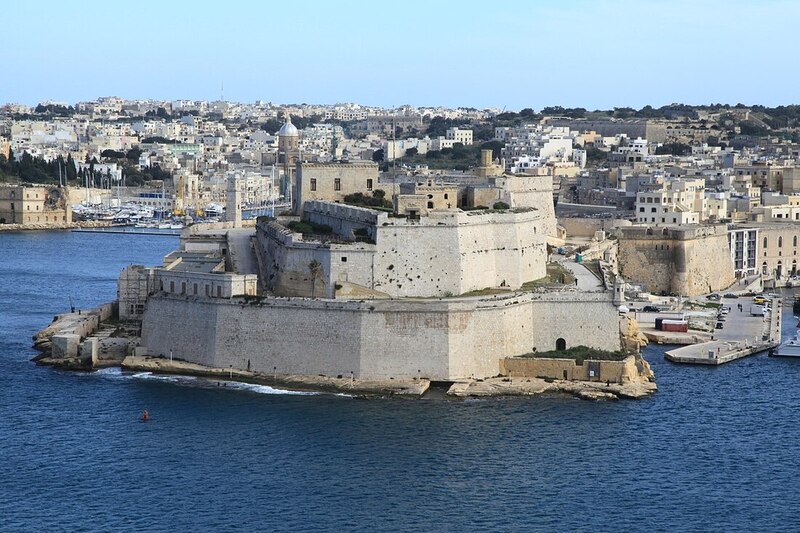 Malta Fort Saint Angelo
​Reg eventually returned to England and HMS Pembroke where he completed his military service showing exemplary Good Conduct Service throughout.
After leaving the Navy Reg became a painter and decorator, and at some point worked at Mount Vernon Hospital, Northwood, Middlesex. He met his future wife Molly Brown in a cafe (location unknown) and they married in 1948 at St Mary's Church in Rickmansworth.
Molly was born on 26th November 1923 in Burnley, Lancaster. She was christened Mary, but was always known as Molly and served as a Lance Corporal in the Auxiliary Territorial Service A.T.S Royal Army Ordnance Corps. O. C. ‘G’ Company Berks and Oxon, as a store woman ( See Mary Brown /Beckley WW2 profile)

After their marriage, Reg and Molly lived in Grove Crescent, Croxley Green, after the temporary prefabs had been demolished, firstly in Flat 2A before moving to 89 Grove Crescent.

Both Reg and Molly enjoyed the outdoors. They particularly enjoyed walking around Croxley Green and often ventured as far as Sarratt for a gentle stroll probably on one of the many footpaths leading out from the village across the fields. They were keen gardeners but they had no access to a private garden, so they took on an allotment just off Lavrock  Lane, Scots Hill, growing vegetables and flowers.
​ 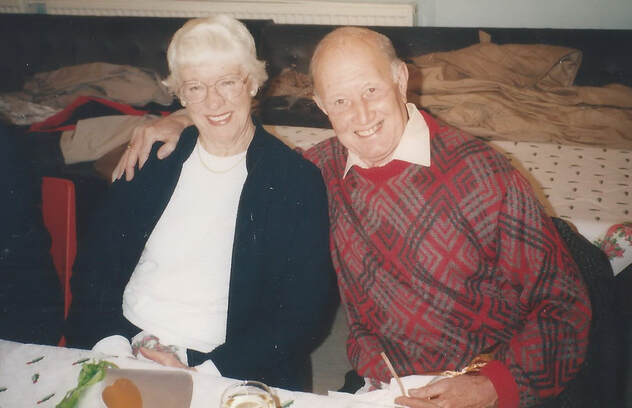 (© Loaned by family members) Reg and Molly taken following many years together. 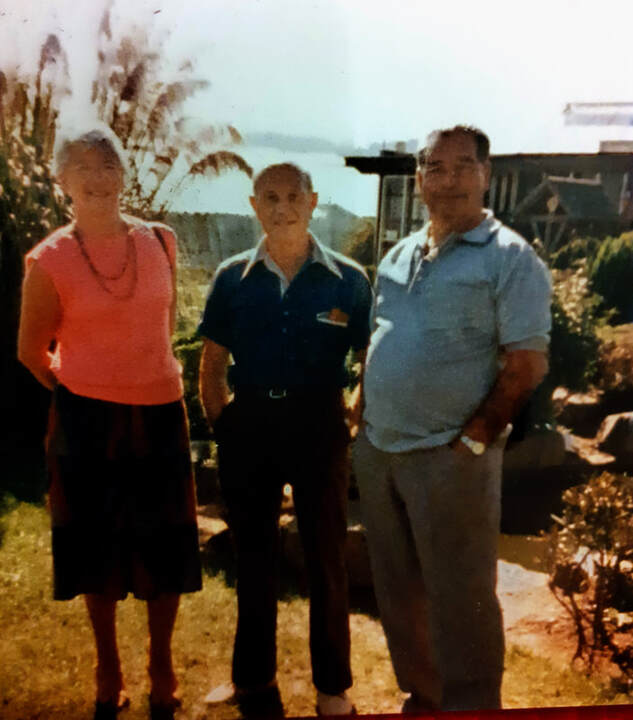 (© Loaned by family members) Molly and Reg with James Cecil Dumbarton (right) Known as Cecil he was Reg's cousin by marriage and also served in WW2 as a Private in the Far East, Burma and Japan.
They continued to live in the same flat, 89 Grove Crescent, and were married for almost 70 years. Reg died just one day prior to their anniversary in 2018. Molly died the following year.